Endowment is inspired by a pandemic connection

Medicine@Yale, 2022 - May June
by Colin Poitras

Tasked with helping Connecticut navigate its way out of the COVID-19 pandemic, one of the first things former PepsiCo CEO Indra Nooyi did was schedule a meeting with Albert Ko, MD, professor at Yale School of Public Health (YSPH).

Appointed as Nooyi’s co-chair on Gov. Ned Lamont’s Reopening Connecticut Advisory Group, Ko is an internationally acclaimed expert in infectious disease. And while Nooyi has served in top-level executive posts at some of the world’s leading companies (PepsiCo, Amazon, Motorola, Johnson & Johnson), she readily admits that her knowledge of epidemiology at the time was limited. 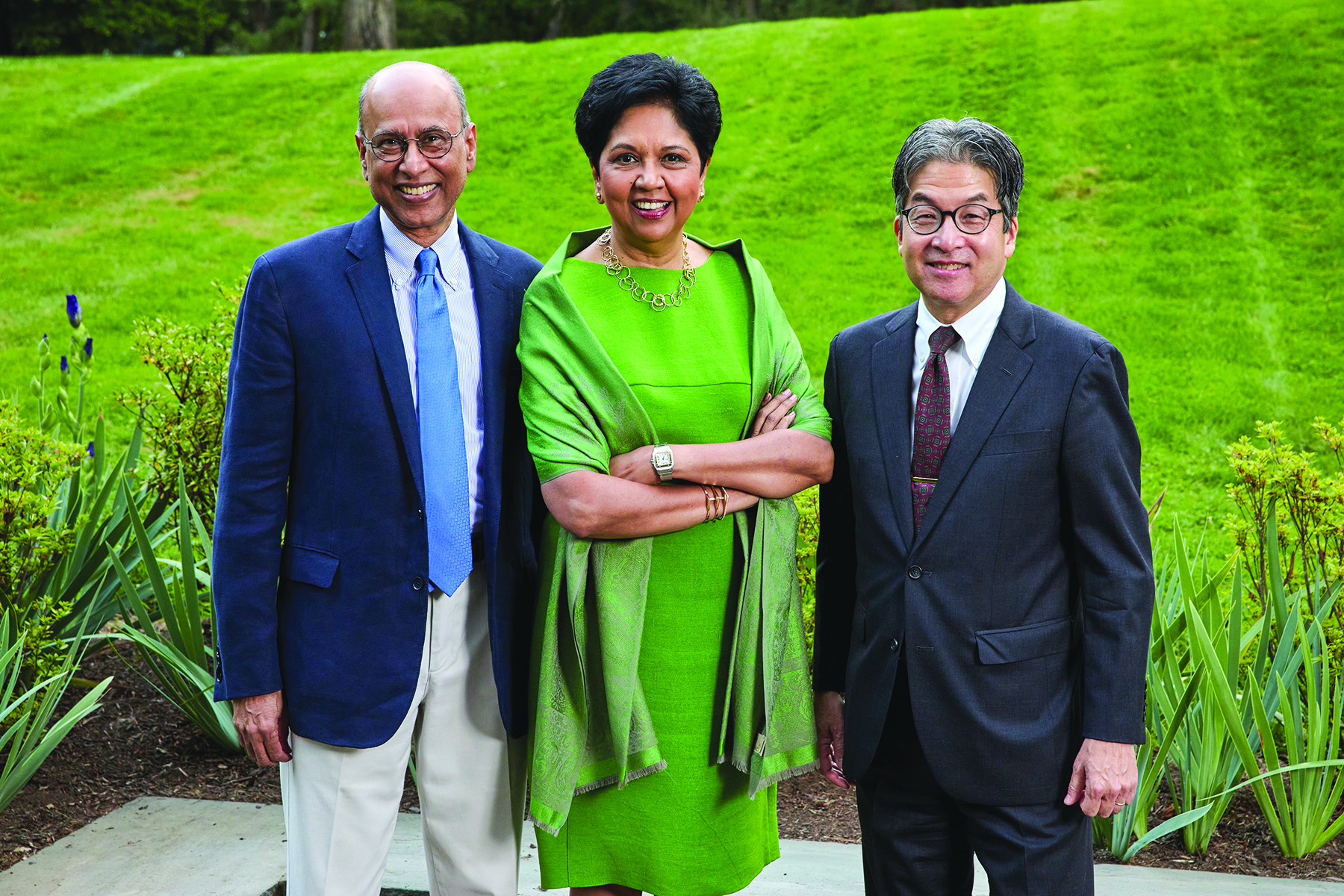 So for several hours on a Sunday morning in May 2020, Nooyi sat in Ko’s New Haven office listening intently as he explained the intricacies of the epidemiology of microbial diseases. By the time the session ended, Nooyi felt she had a pretty good working understanding of disease transmission rates, immunoglobulin antibodies, polymerase chain reactions, and even the unwieldy concept of R-naught.

In the same meeting, Nooyi, a Greenwich, Conn. resident and 1980 graduate of Yale School of Management, shared with Ko her insights on the needs of the business community, which at the time was struggling massively under strict lockdown measures intended to limit spread of the highly contagious disease.

“We managed to reach a common knowledge base between lives and livelihoods,” said Nooyi, who has been consistently ranked among the world’s 100 most influential women. “We knew we had to work together to come up with a plan that was sensible and something we could share with the governor, and we needed to make sure that we both understood each other. The way he explained the science, the way he served as co-chair thereafter was pretty spectacular. Right at that moment, I knew Albert Ko was a keeper. He was fantastic.”

Nooyi was so impressed by Ko’s extensive knowledge and scientific approach that she and her husband, Raj Nooyi, a global supply chain executive, contributed a $3 million gift to establish the Raj and Indra Nooyi Professor of Public Health at Yale. With the enthusiastic support of Yale President Peter Salovey and the Board of Trustees, Ko became the inaugural holder of the chair in July 2021.

Ko is highly regarded for his research and scholarship. For 11 years, he served as chair of YSPH’s Department of Epidemiology of Microbial Diseases. He is also a professor of medicine (infectious diseases) at Yale School of Medicine and an attending physician at Yale New Haven Hospital. Ko has conducted extensive research into the transmission dynamics of leptospirosis, a rat-borne disease that has plagued slum settlements in Brazil and elsewhere. As a result of his work on disease trans- mission in urban environments, there has been a significant reduction of disease in Brazil. Ko’s research team also provided critical insight into the possible cause of severe birth defects associated with a devastating Zika virus outbreak in Salvador, Brazil in 2015.

Indra Nooyi’s and Albert Ko’s leadership on the advisory committee contributed to Connecticut becoming a national model in terms of cur- tailing SARS-CoV-2 infections and delivering vaccines. Nooyi said Ko’s contributions to the state in terms of scientific guidance were instrumental to Connecticut’s success. “Albert, because of his vast experience dealing with contagions in emerging markets in Brazil, knew we had to vaccinate fast,” said Nooyi. “In developed markets like we have in the U.S., we don’t often see disease outbreaks like COVID-19. As an advisory group, we had to adopt a different mindset to get PPE and vaccines launched quickly, and Albert knew exactly what needed to be done.”

The Nooyis see their support of Ko and establishment of the endowed professorship as an important step in securing YSPH’s position as an international leader in public health science, implementation, and technology. In their view, the school, with its scientific excellence, world-class researchers, scholars, policy advisors, and innovators, could serve as an anchor for a future Connecticut life sciences research network. With increased investment from Yale and support from private donors, YSPH could become the mea-sure of excellence other schools aspire to achieve.

“I’d like to see Yale do what Stanford and Berkeley did in Silicon Valley,” said Raj Nooyi, who counseled Ko on supply chain acquisition and distribution strategies during Connecticut’s COVID-19 campaign. “If Yale School of Public Health could do that in New Haven and in Connecticut, that would be a real game-changer.”

“There is a gigantic opportunity for public health and business management to work together and think about public health in a more integrated and holistic way,” Indra Nooyi said. “We need to have the agility to bring these new technologies into the field, develop new public health measures, and then work with businesses to implement them.”

Indra Nooyi echoed her husband’s sentiment that YSPH is at a critical point in time in terms of expansion, recognition, and growth—and that a major gift endowing the school is essential to its future.