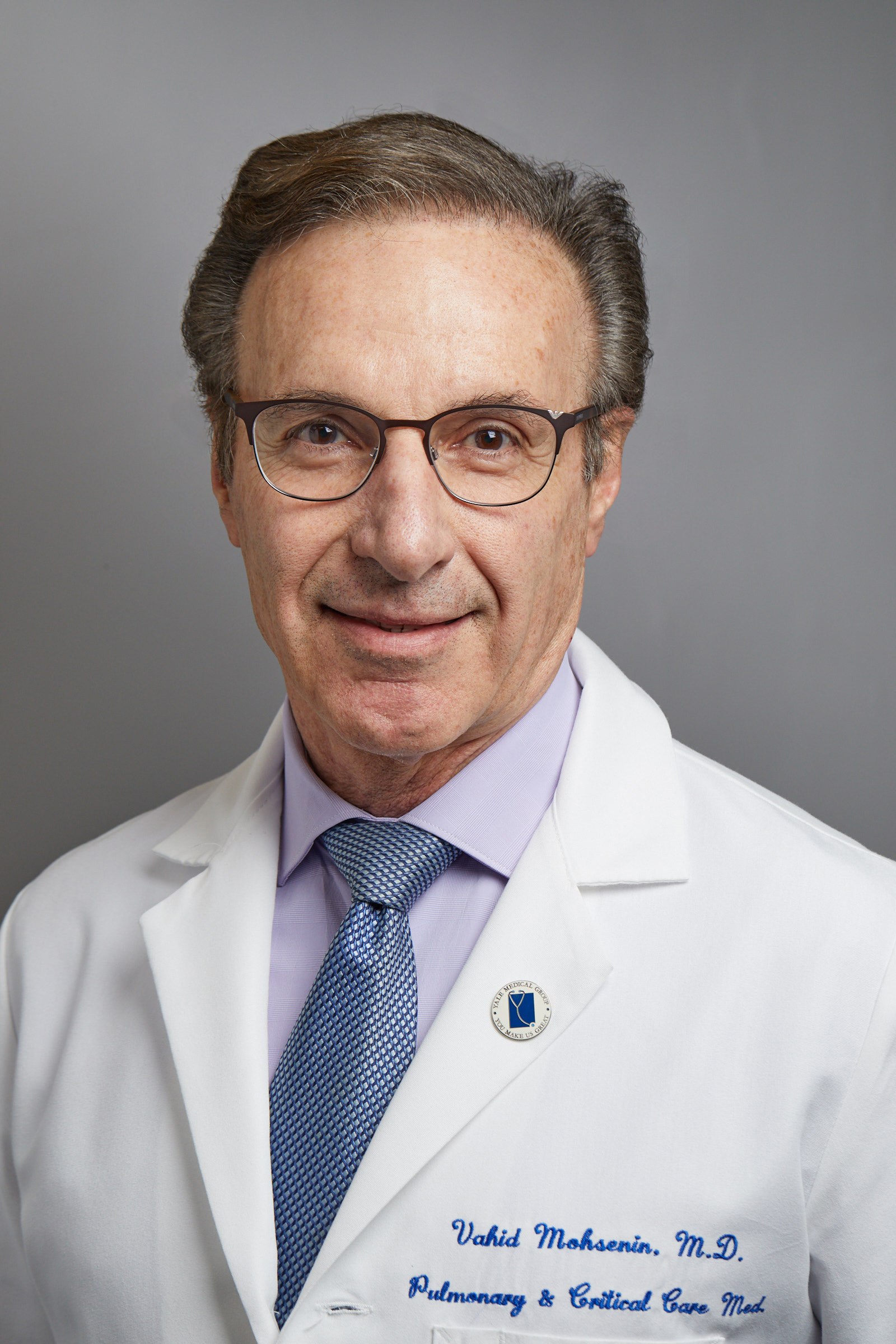 Vahid Mohsenin, MD, professor of medicine (pulmonary) in the section of Pulmonary, Critical Care & Sleep Medicine (Yale-PCCSM) at Yale School of Medicine (YSM), has climbed many high-altitude mountains during his lifetime -- in North and South America, Africa, Europe, and Asia. But perhaps his most consequential climb has been in the field of pulmonary and sleep medicine, where he has made a lofty impact during his 40-year career.

Mohsenin, professor emeritus of medicine and senior fellow, The John B. Pierce Laboratory, has retired from clinical medicine at YSM as of July 2021. Mohsenin plans to continue his research studies of the pulmonary system, which he describes as "one of the most complex organ systems after the central nervous system.

"That complexity was very attractive to me," he said. "It's a very challenging field."

Mohsenin earned his medical degree from Pahlavi University School of Medicine in 1976 in Shiraz, Iran. He worked as an intern and resident at Pahlavi University Medical Center until 1977, when he emigrated to the United States to work at Moffit Hospital in San Francisco, Calif. His mentor, Arthur DuBois, MD, recruited him to New Haven, for a pulmonary and critical care fellowship. His plan was to complete his clinical rotation, and then research with DuBois for two years through the John B. Pierce Foundation Laboratory. He has been in New Haven since 1978.

He decided to stay at Yale, rising through the academic ranks.

"The uniqueness of Yale was that it's one of the premier institutions, and yet very humble in terms of people who are in it," he said. "They always have an open-door collaborative mindset, different from other institutions. And that makes you feel comfortable to talk to people, to get research going, collaborations, picking your brains. There is a collegial, collaborative spirit here."

The Centers for Sleep Medicine is one of Yale-PCCSM’s Centers of Excellence and is internationally recognized for its expertise. Until his recent retirement from clinical work, Mohsenin was among the center’s specialists who cared for patients with a broad spectrum of sleep disorders, including sleep apnea, insomnia, narcolepsy, and restless leg syndrome. The center offers comprehensive diagnostic testing and treatment services, working closely with a network of specialty providers from otolaryngology, neurology, bariatric surgery, among others.

In addition to his work as a clinician, Mohsenin has educated and inspired new generations of pulmonologists. Lauren A. Tobias, MD, assistant professor of medicine at Yale-PCCSM, first met Mohsenin in 2007 when he was an attending physician in Yale New Haven Hospital’s MICU.

“At the time, I had no idea that sleep medicine was even a career option, and I was impressed by his passion for the field,” said Tobias, who is the medical director of the Sleep Medicine Program at VA Connecticut Health Care.

As a fellow, Tobias trained with Mohsenin. “Reading sleep studies with Dr. Mohsenin, I knew I could always count on clear and concise explanations for the phenomena we observed,” she said. “He has always been a committed teacher who challenges trainees to seek out the evidence underlying their clinical decisions.”

Mark D. Siegel, MD, professor of medicine (pulmonary) trained with Mohsenin from 1992-1995 when he was a pulmonary and critical care fellow, and Carolyn D'Ambrosio, MD, traces her interest in sleep medicine back to 1999 when she was a fellow participating in a research study with Mohsenin on quality-of-life improvement in patients with obstructive sleep apnea. The study was among the first to report a positive improvement for people who were treated for obstructive sleep apnea, D'Ambrosio said.

"Dr. Mohsenin was doing sleep medicine long before anyone talked about it, and he built the sleep program at Yale from nothing. Honestly, it was just one or two beds at Gaylord Hospital with a couple of sleep studies a week, and now it is a very prominent sleep center that is known nationally and internationally," D'Ambrosio said. "He was one of the first people doing research in sleep-disordered breathing. And now, of course, we have several National Institutes of Health-funded researchers at the Yale Sleep Center. So he really was a pioneer, and his impact is enormous."

Mohsenin has left an impact on education at YSM as well. Like Tobias, he was Siegel's first attending physician, and Siegel was struck by his teaching methods as well as his profound understanding of pulmonary physiology and how the lung works.

Yale's Pulmonary and Critical Care Section in the early 1990s was much smaller, with not much more than 10 faculty members, compared to the 70 faculty who are members of the section today, Siegel said. "As a consequence, the fellows would get to know individual faculty very well, and there was a natural mentorship relationship that would grow out of that simply by spending time together," Siegel remembered.

"The fellows spent much of their first years on rotations at Gaylord Hospital, where the chronic pulmonary unit and sleep operations were located,” Siegel said. "Gaylord was built as a TB sanitarium, and so it actually had these gorgeous grounds -- there was a little building with the hospital and then lawns with picnic tables and areas to walk around, and it was July. And so Vahid and I would basically go outside, and he would teach me, and it was very Socratic," Siegel said.

"Whether it was sitting on that picnic bench, which is my most vivid memory, or seeing patients together with him, I learned a tremendous amount, and he left a huge imprint on me in terms of the type of physician and teacher I wanted to be."

In 2004, Siegel traveled with Mohsenin to Iran. The experience has influenced Siegel's work as director of the Internal Medicine Traditional Residency Program. "He and others like Dr. Asghar Rastegar have helped us focus at Yale on our role as global citizens, and to appreciate the quality of medical care that happens around the world," Siegel said. "He has shown us that we have a lot to learn from people who train in other countries."

Climbing with a Good Team

Mohsenin turns this praise back on the people he has worked with during his career. "The most gratifying part was working with the right people...the fellows I attracted when I was senior enough in my research," he said. "I don't use the words mentee and mentor – it's a little egoistic for me to say I'm a mentor of someone. I would say we co-learn, we co-investigate together and learn together," he said. "And then I help them to move on.

"I'm proud of that, and a lot of them are actually at Yale and other institutions: Henry Yaggi, MD, MPH, Janet Hilbert, MD, and Behrouz Jafari, MD, who practices medicine in California.”

Mohsenin’s humility is not lost on Yale-PCCSM Section Chief Naftali Kaminski, MD, Boehringer-Ingelheim Endowed Professor of Internal Medicine. “Vahid always says he loved Yale because it was a premier institution that was very humble, and I feel that in some ways that describes him as well,” Kaminski said. “He is an outstanding pulmonary and critical care clinician, a pioneer in sleep medicine and research, a world traveler, and a superb mentor. But he also is an unassuming, humble, and friendly team member, always ready to help, collaborate, and contribute – and to some extent, this is the spirit of Yale-PCCSM.”

Mohsenin is scheduled to present the Yale-PCCSM Grand Rounds on November 17, 2021. The title of his talk is “Honor Lecture: Research Ventures at Yale.”

He also has unfinished research that he would like to "get rolling," he said. "I've already done 40 years of critical care and pulmonary, and that's fun. It's a chapter that is ending, and I'm opening up a new chapter and writing the new chapter in terms of what can I do to maybe make a little bit more impact," he said. Among the projects, he intends to follow is respiratory health research that he's done with colleagues in Uganda.

But first, there are outdoor adventures to enjoy.

“He is a fantastic example of someone who has managed to balance academic medicine with other pursuits, most notably his climbing, which has taken him around the world,” Tobias, his former fellow, said.

The Section of Pulmonary, Critical Care and Sleep Medicine is one of the eleven sections within YSM's Department of Internal Medicine. To learn more about Yale-PCCSM, visit PCCSM's website, or follow them on Facebook and Twitter.