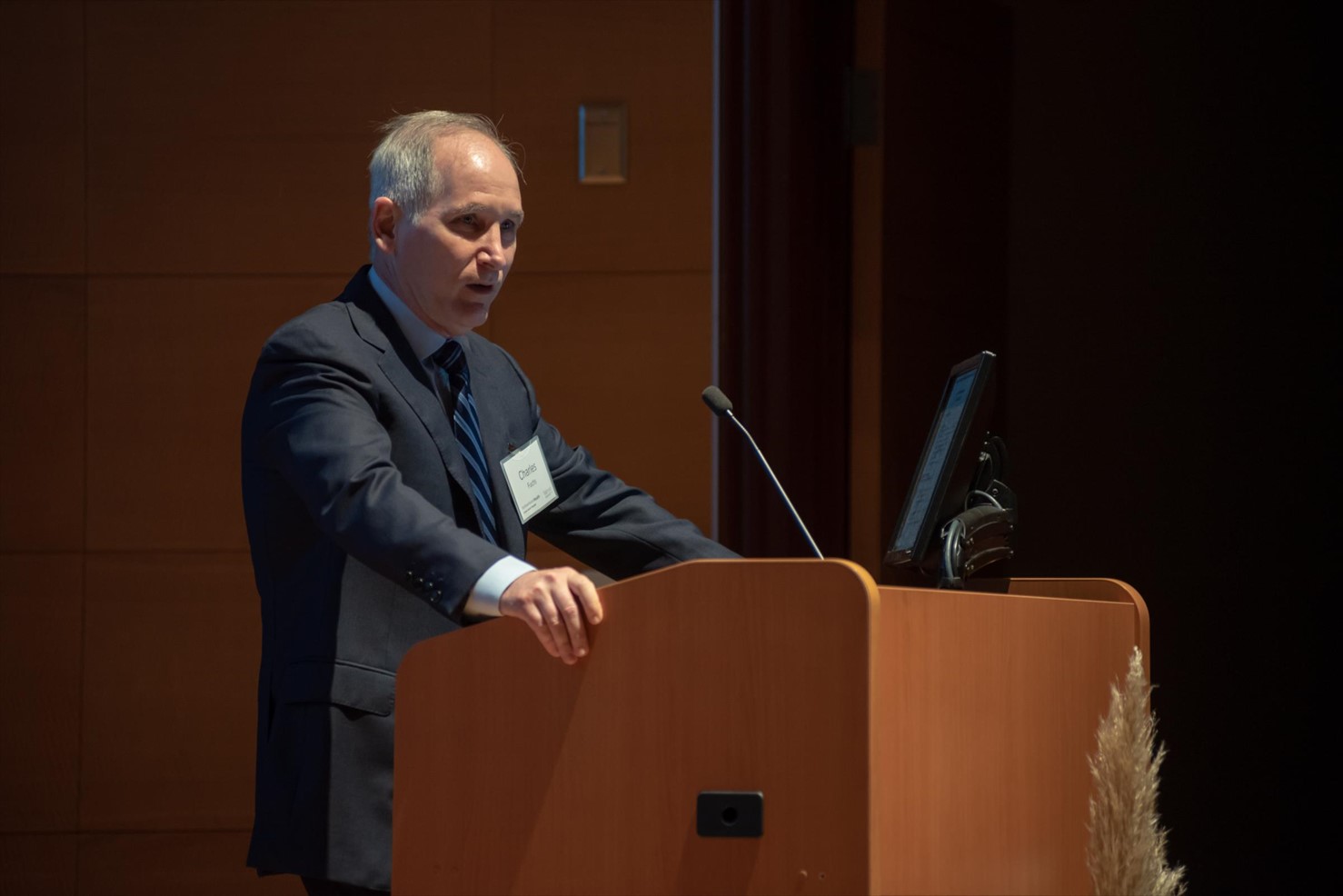 On October 1, two scientists who uncovered key aspects of immunotherapy—using the body’s immune system to fight disease and cancer—learned they had won this year’s Nobel Prize in Physiology or Medicine.

Today’s basic and clinical research within the field builds on the trailblazing work in the 1990s of those Nobel Laureates, James P. Allison and Tasuku Honjo, as well as that of Yale’s Lieping Chen, MD, PhD, United Technologies Corporation Professor in Cancer Research and professor of immunobiology, of dermatology, and of medicine (medical oncology), who is credited with discovering PD-L1, an immune checkpoint protein, about which he published a paper in 1999.

An audience of approximately 200 people heard some of the latest findings presented by top immunotherapy scientists at a daylong symposium on October 4 hosted by the Yale Center for Immuno-Oncology (YICO).

Launched in March by Yale Cancer Center (YCC) and the medical school’s Department of Immunobiology, YICO has a goal of fostering basic research into the immune system’s biological mechanisms that could be used to fight cancer, and supporting clinical research that makes use of those mechanisms. Roy S. Herbst, MD, PhD, Ensign Professor of Medicine, serves as YICO’s interim director while a search proceeds for its inaugural leader.

Herbst observed that the symposium’s topics, which ranged from molecular targets to melanoma clinical trial results, “take us from the lab to the clinic and back again multiple times.” At YICO, researchers also hope to work fluidly between those two settings, he said.

When immunotherapy was relegated to the lab in its early days, some soothsayers claimed it would never make it to the clinical setting. Speakers and attendees at the event occasionally referred to immunotherapy’s fitful, slow progress.

“When I went to medical school it was clear that the key to cancer was going to be immunology and that was followed by decades of disappointment. That’s all changed in last decade. This has now clearly become the most exciting area of cancer research,” Dean Robert J. Alpern, MD, Ensign Professor of Medicine, said at the event’s start.

Charles S. Fuchs, MD, MPH, Richard Sackler and Jonathan Sackler Professor of Medicine (Medical Oncology), YCC’s director, and physician-in-chief of Smilow Cancer Hospital, echoed that sentiment. “In some respects, we have all become immuno-oncologists,” he said, adding: “We’ve had phenomenal advances, but we also recognize the challenges ahead.”

“My excitement, personally, is the opportunity to have these speakers heard by our community,” said Nikhil Joshi, PhD, assistant professor of immunobiology, who led the event’s organizing committee. “The speakers are on the same level of any major immuno-oncology conference.”

From the Dana-Farber Cancer Institute and the Broad Institute, W. Nicholas Haining, BCh, discussed a protein, which is known to be involved in the innate immune response, and its role in the upregulation of interferons.

More research is needed to understand the genomics of the gut microbiome, according to Jennifer Wargo, MD, of MD Anderson Cancer Center, but her preliminary research pointed to a pattern found among patients with diverse and robust microbiomes: their immunotherapy treatment seemed to perform better than in those with fewer varieties of microbes.

In closing remarks, David G. Schatz, PhD, chair of immunobiology and Waldemar Von Zedtwitz Professor of Immunobiology, highlighted the benefits of scientists exchanging ideas from across specialties and stages of research. “Today has taken us from the fundamental mechanisms of the immune response, to exciting work in translational immuno-oncology, to imaging, and computational work, and all the way to the clinic—and back,” Schatz said.

After the day’s “whirlwind tour of immuno-oncology,” Herbst said, “we hope to break down barriers so we can solve this tough problem of cancer.”

Interest within the auditorium, in fact, extended beyond cancer. A first-year doctoral student who attended, Molly Bucklin, investigates chronic inflammatory diseases. “Dr. Haining identified a protein which normally limits inflammation as a target for future cancer immunotherapies,” Bucklin said. “This suggests that tumors have enough innate ligand to sufficiently elicit an inflammatory response if the sensing checkpoint protein is removed.” Bucklin says that action—the ability of a potential therapeutic target to both induce and reduce inflammation—could be applied to her research.