Much of what we know about human health and disease is segmented based on knowledge about particu- lar organs and by medical specialty. Fields like cardiology, hematology, and pulmonology focus on illnesses that affect certain parts or systems within the body. While science has given us detailed and specialized information about individual conditions, we still don’t fully understand the broader patterns that contribute to health and disease. 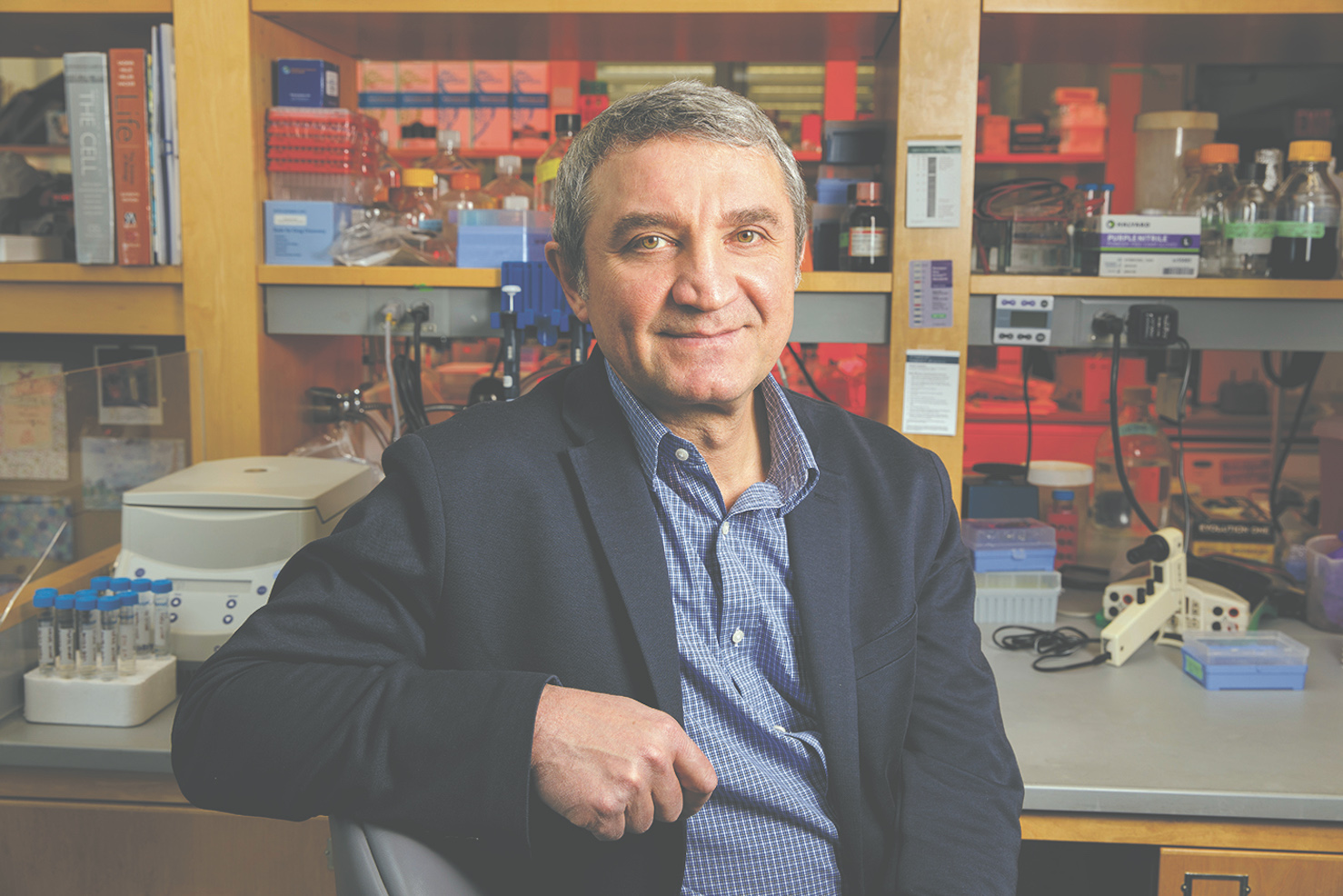 Ruslan Medzhitov, PhD, Sterling Professor of Immunobiology, sees an opportunity to uncover fundamental knowledge about disease and what makes people vulnerable to illness. To do so, he is looking to conceptual models—such as systems theory, control theory, adaptation, and trade-offs—from fields like physics, economics, math, and evolutionary biology and applying them to broad questions about human health.

“This type of thinking is opposite to the current trends in biology and medicine,” says Medzhitov. “We are seeing progressively more fragmented knowledge becoming incredibly specialized. But there is great promise in investigating common themes, overarching rules, and patterns to tell us more about healthy states and disease states.”

With generous support from Foresite Capital founder Jim Tananbaum YC ’85 and Dana Tananbaum, Medzhitov will put this approach into action. Yale is launching the Tananbaum Center for Theoretical and Analytical Human Biology, led by Medzhitov, with a focus on inflammation as an agent in all human diseases. Medzhitov envisions a collaborative model, in which researchers with expertise in a variety of areas come together to ask broad questions.

“This new center will enable discoveries about the fundamental mechanisms of our biological systems and the underpinnings of disease. I am proud to support this pioneering work under Ruslan’s extraordinary leadership and vision,” says Jim Tananbaum.

With a background in medicine, biology, data science, and technology, Jim was drawn to the idea of applying computational tools and systems-oriented approaches to biological research. Parents of two Yale College graduates, Jim and Dana have supported a wide range of areas, including scholarships in Yale College and fellowships at the School of Engineering and Applied Science. Last year, they created the Tananbaum Family Scholarship Fund at Yale School of Medicine as part of their philanthropy efforts.

“Looking at biological functions, such as inflammation, through a the- oretical lens opens up new opportuni- ties to identify principles that explain how our bodies work,” notes Nancy J. Brown, MD, the Jean and David W. Wallace Dean of Yale School of Med- icine. “We know that inflammation plays a central role in maintaining health. At Yale, inflammation science is a strength of ours and an ongoing university priority.”

The Tananbaums’ gift will fund the recruitment of several faculty members who will be based primarily in the departments of immunobiology, cell biology, pathology, or medicine and who have expertise in mathematics, biomedical informatics, and data science. These researchers will connect with other investigators at Yale and elsewhere. The center will also generate unique data analytics and computational tools that can benefit the wider scientific community.

One area Medzhitov is eager to explore is a new classification system for diseases. “Broadly, we can imag- ine a list of all human diseases and, using a theoretical framework, we can put them into categories based on their similarities and differences,” he explains.

“For example, if somebody has the flu, they may feel sick with a fever and fatigue, but generally they get better after a few days of rest. The immune system has mechanisms that bring a person with the flu back to a healthy state. Now think about someone just diagnosed with pancreatic cancer. They may not feel any symptoms yet; they might feel fine compared to a person with the flu. But we know there is no natural way for them to recover. These are two examples of very different categories of disease.”

By plotting out diseases using a method similar to the periodic table, researchers might reveal patterns that were previously unnoticed and develop new insights related to their causes.

Other areas of the center’s planned research include developing a conceptual framework to characterize tissue organization in the body and defining the principles of interactions between cells, tissues, and organ systems; exploring various internal and external variables in healthy and disease states and investigating how these states are connected; and defining the design principles of biological systems, including the limitations of each design that can lead to disease under certain conditions.

Medzhitov notes that much of this work will rely heavily on big data sets that are becoming more avail- able, such as genomic data and data related to clinical measurements. But coming up with new frameworks, he says, is not as simple as bringing in a data scientist. It’s about the types of questions the center’s researchers will ask: What are the design features of biological systems that allow disease to develop? What is it about human biology that creates vulnerabilities for Alzheimer’s disease or type 1 diabetes, for example?

“We know there are patterns to human health and failures of health,” Medzhitov says. “We aim to identify the patterns and underlying reasons—whether they be evolutionary reasons, environmental reasons, trade-offs between different aspects of human biology, or something else.”