Medicine@Yale, 2022 - May June
by Isabella Backman

As a child, Flora Vaccarino, MD, always wanted to build things. She would steal gadgets from the kitchen of her childhood home, and use a hammer and nails to construct her creations. Although she admits that her inventions were never very sophisticated, the opportunity to create with her hands was very important to her. Now, Vaccarino is Harris Professor in the Yale Child Study Center and professor of neuroscience, and she is building cerebral organoids—3D models created from stem cells that mirror portions of human brains. The organoids help her study human brain development in ways that previous research methods could not. 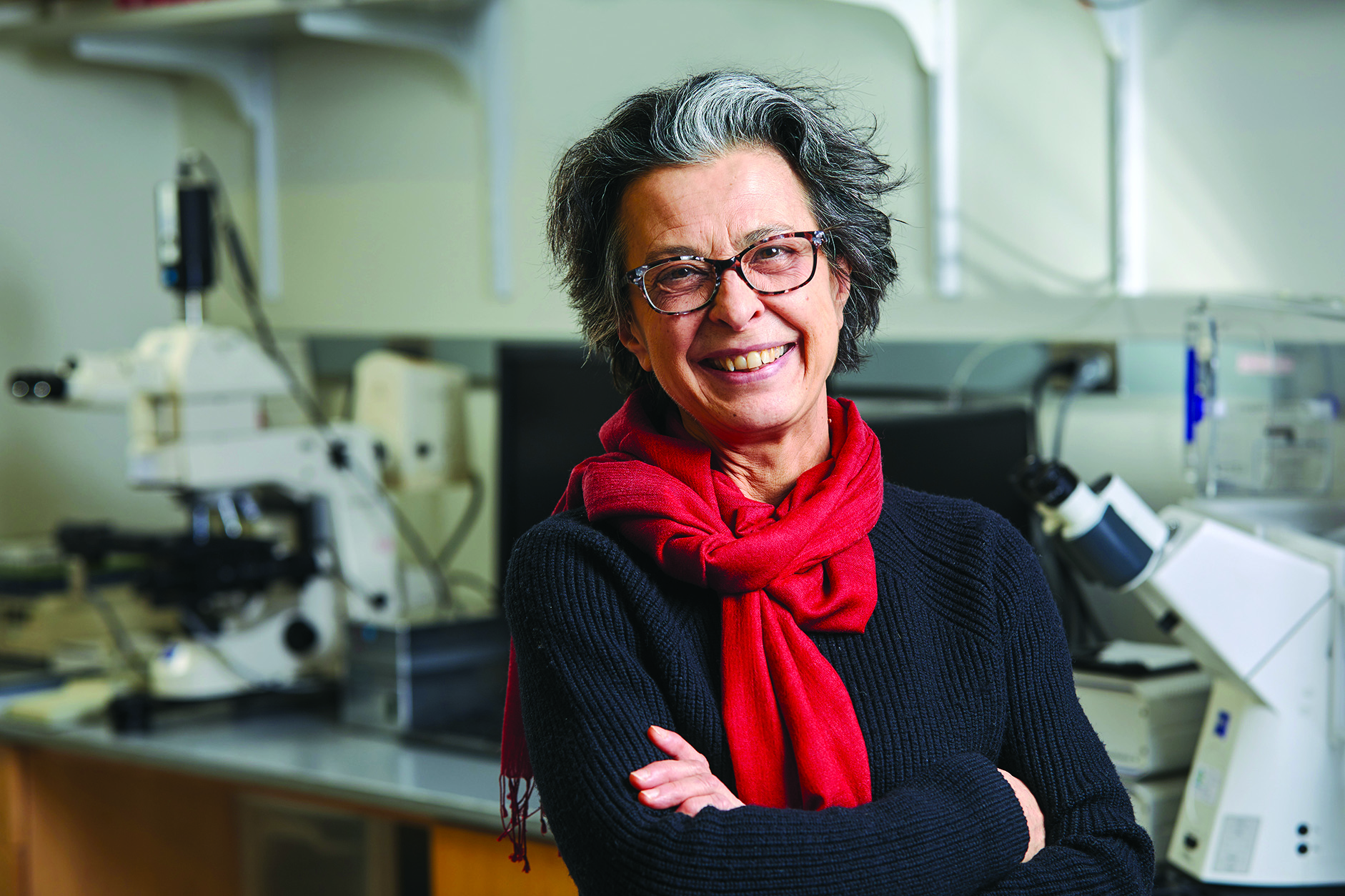 Vaccarino was drawn to medicine through her desire to better understand how the human body is built, and she received her MD from the University of Padova in her native Italy. She describes her time as a neurology resident as a wonderful experience, but also very sobering. The brain is an extremely complex organ, and often there was very little she could do for her patients other than watch them and offer support. She wanted to learn more about how to potentially repair the brain, ameliorate deficiencies, or at least understand how certain deficiencies came about. “Neurology is a very hard specialty to be in,” she says. “The brain doesn’t regenerate. It’s not like other parts of the body.”

In Italy, research was not encouraged among medical students, she explains. So, after medical school, she traveled to the U.S., where she joined the National Institutes of Health as a neuropharmacology fellow. There, her fascination with mental diseases grew, and she became curious about psychiatry. She then became a psychiatry resident at Yale, to which she was drawn because it offered a premier residency program that also encouraged research. She spent her days working with patients, and then would run experiments on mice at the lab late at night. “Yale is still one of the few places where you can do both research and clinical work,” she says.

A Yale faculty member since 1994, Vaccarino continues to study brain development and function in order to better understand psychiatric disorders. At first, she used mouse models to study the role of single genes in brain develop- ment. But over the past decade, she has shifted her attention to reprogramming human cells into stem cells.

In collaboration with other physicians, Vaccarino has recruited patients with psychiatric disorders to create induced pluripotent stem cell (iPSC) lines. By taking a small biopsy, she is able to grow skin cells in a petri dish and reprogram them into stem cells that can differentiate into neurons. This process allows her to study dis- orders that are caused through divergences in development.

However, Vaccarino also realized that human brains don’t naturally develop as cells do in a dish. That is where the idea arose for her lab to spearhead the development of human brain organoids, in which cells from her iPSC lines aggregate into a 3D structure as they proliferate, divide, and grow in size. Because the cells in these models grow intimately connected to each other, similarly to how they would naturally, these organoids—while not living brains—are a much more accurate picture of brain cell growth and development.

Vaccarino says her organoid research allows her to “go back in time” and try to understand how a particular person developed in utero. Her work, she explains, is like looking at ancestry.com for our own bodies—she explores the ancestry of our own cells and how they developed. Her research will especially be helpful in individuals with Tourette’s syndrome, autism spectrum disorders, and other early developmental disabilities. “For many of them, we don’t even know the genes that cause these disorders,” she says. “And even if we know the genes, we don’t know what the functions of these genes are in early development.”

She hopes her research will lead to more treatments and therapeutic opportunities. Her work with organoids, for example, might lead to a greater understanding of why a certain drug works in one subtype of a disorder but not others. It could also help scientists develop newer, more effective drugs—if an organoid model revealed that cell hypoactivity was a cause of certain symptoms, for instance, they would know to try and compensate for the underdeveloped cells. Being at the Child Study Center, Vaccarino says, has greatly enriched her work. At the center, she collabo- rates with many clinicians in recruiting patients for making iPSC lines and discusses with them clinical phenotypes that could be correlated with her organoid research findings. “Being in the Child Study Center has a tremendous impact in my ability to move forward with this type of research that focuses on patients and family members,” she says.