At a 2016 conference celebrating 40 years of women at West Point, Melissa Thomas felt the familiar pull of investigative curiosity.

“I thought, ‘This is a population that should be studied,’” Thomas said, adding that it would be particularly important to study possible differences between female and male graduates.

The idea inspired her to assess risks and resilience of female and male West Point graduates related to their long-term physical and mental health outcomes. The investigation became her medical school thesis, a novel research project required of all students before graduating from Yale School of Medicine.

Under the mentorship of Women’s Health Research at Yale Director Carolyn M. Mazure, Ph.D., Thomas has gained a new appreciation for how sex and gender can influence health.

“So much of what we are taught in medical school relies on studies conducted only or mostly on white men,” Thomas said. “That needs to change.”

Thomas graduated from the U.S. Military Academy at West Point before serving as a Medical Service Corps officer establishing clinics and supervising medics and technicians from 2004 to 2015, including in her two deployments to Iraq. Many life changes since then brought her to the decision to pursue medicine as a civilian. Now she is set to graduate Yale School of Medicine in May with plans to become an emergency medicine physician. 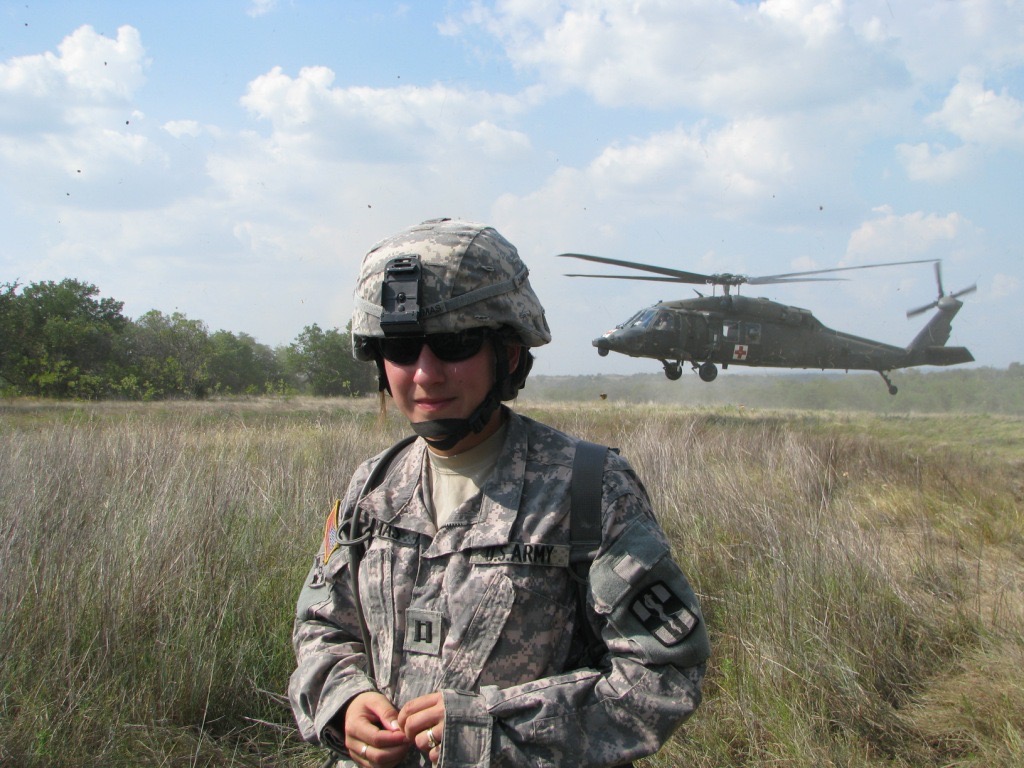 “Emergency medicine can seem chaotic, but it is a well-oiled machine,” Thomas said, commenting on domestic hospital emergency departments and how medicine is practiced in war zones. “A real team.”

Before embarking on her thesis, Thomas mentioned the idea to Dr. Robert Pietrzak, Director of the Translational Psychiatric Epidemiology Laboratory in the Clinical Neurosciences Division of the U.S. Department of Veterans Affairs National Center for Post-Traumatic Stress Disorder (PTSD), with whom she had collaborated on an earlier study. Pietrzak, an Associate Professor of Psychiatry and Public Health at Yale, serves on WHRY’s faculty committee evaluating potential pilot project grants, and he suggested Thomas collaborate with Dr. Mazure.

In a shared collaboration with Drs. Mazure and Pietrzak, and after obtaining permission from West Point, the Army, and Yale for this study, Thomas surveyed 1,344 graduates from the classes of 1980-2011 to collect sociodemographic information and data on self-reported physical and mental health behaviors and conditions as well as details of their military service.

From these data, Thomas found that increased psychological resilience in the graduates was associated with higher levels of factors such as increased purpose in life, social connectedness, and grit, which is defined as “perseverance and passion for pursuing long-term goals.”

Thomas said her study was designed to inform prevention and intervention efforts that improve resiliency and health outcomes in West Point graduates. But, importantly, she said these lessons could translate to a larger population as well.

“This is a high-performing, elite group that in many ways resembles individuals who serve at the highest levels of business and government,” Thomas said. “There is much we can learn from and for these women and men.”

Thomas, Pietrzak, Mazure, and colleagues at Tufts University and Uniformed Services University of the Health Sciences have collaborated to adapt the study for submission to an influential academic journal.

Even as she nears her medical school graduation, Thomas has already embraced the teaching aspect of medicine. In a pair of essays in the New York Times Magazine last year, she shared personal lessons with universal applications.

In one piece, she described in heartbreaking detail the delicacy with which she was told her military veteran husband had died in an avalanche on New Year’s Eve 2014 while snowshoeing in Colorado. She expressed how such conversations are the unavoidable, solemn duty of an emergency medicine physician and how she hopes she can provide the same compassion and support for her patients’ families.

In the second piece, she discussed how volunteering as a control subject in a study about veterans with post-traumatic stress disorder helped fuel her curiosity and prompted her to reevaluate her relationship to trauma in the absence of the PTSD so many of her veteran peers continue to experience.

“Melissa’s unique background and her compassion, intelligence, grit, and commitment to providing the best care for her patients form a sturdy foundation for what promises to be a stellar career in emergency medicine,” Mazure said. “Opportunities to help guide someone like Melissa are why I value being a mentor.”

Thomas thanked Drs. Mazure and Pietrzak for their support and mentorship and dedicated her thesis in honor of her fallen West Point classmates “who have gone before us and inspire to make us all better.”

“Often, the only winner in war is medicine, where advances come from necessity,” she said, adding that she wants to help advance medical knowledge of how sex and gender influence health. “We know what we don’t know. Now the research has to catch up so that we actually know what we need to know to help everyone.”

The presentation of a dissertation has been one of the requirements for the degree of Doctor of Medicine at Yale for over a century. Initially, case reports and reviews of literature predominated, but as the scientific method found its place in medicine, the faculty required that dissertations presented be based on original investigation either in the laboratory or in the clinic. The thesis requirement continues to be enthusiastically endorsed by the faculty as an important component of the "Yale System" of general medical education.

The creative discipline required to carry out a project and prepare a thesis enables each student to become a physician-scholar, whether the student’s ultimate objective is clinical practice, research, teaching, or administration. The M.D. thesis at Yale teaches students how to understand the scientific method from the inside, how to design a hypothesis, how to collect and evaluate data and communicate the knowledge to others, and how to think scientifically and critically for the rest of their professional lives. This tradition is a hallmark of the Yale system of medical education.