On the evening of November 18, Yale School of Medicine (YSM) faculty and residents from the Division of Vascular Surgery guided over 50 YSM students as they practiced knot-tying and suturing. The twist on this traditional fall simulation and skill building session to spark students’ interest in vascular surgery and prepare them for clinical rotations was that it was completely virtual, due to COVID-19 restrictions.

Chan explains why finding a way to hold the event, despite the pandemic, was so important. She describes how these in-person sessions, focused on skills that are important for surgical clerkships, often “are the only times medical students can work with residents and attendings to learn suturing and knot tying skills before they hit the wards.”

Chan, Gardezi, Chaar, and Brahmandam briefly considered a hybrid in-person/virtual session, but quickly realized that also would not be feasible. Chan says Chaar then suggested doing it virtually. Because this had never been done before, Chan says the team did quite a bit of planning and brainstorming about what would be the most effective way to do this. Chaar states, “this was our first time to do a virtual simulation session and it was challenging.”

Brahmandam explains, “the biggest hurdle, was to try to replicate the ‘in-person’ experience through a virtual platform. We wanted the students to be able to tie surgical knots, handle Castroviejo needle holders, and perform a vascular repair. To replicate that, we realized that we needed to provide all participating students a kit with instruments, suture material, and graft material.”

This potential barrier was overcome by the generosity of the vascular surgery attendings, who donated suturing materials, including Castroviejos, prolene sutures, and penrose drains, for up to 60 students to participate. (The YSM Student Affairs Office had offered to help with funding, but that ended up not being necessary because of the attendings’ donation.) Gardezi packaged the suturing kits and distributed them in a COVID-safe manner to students who committed to attending. 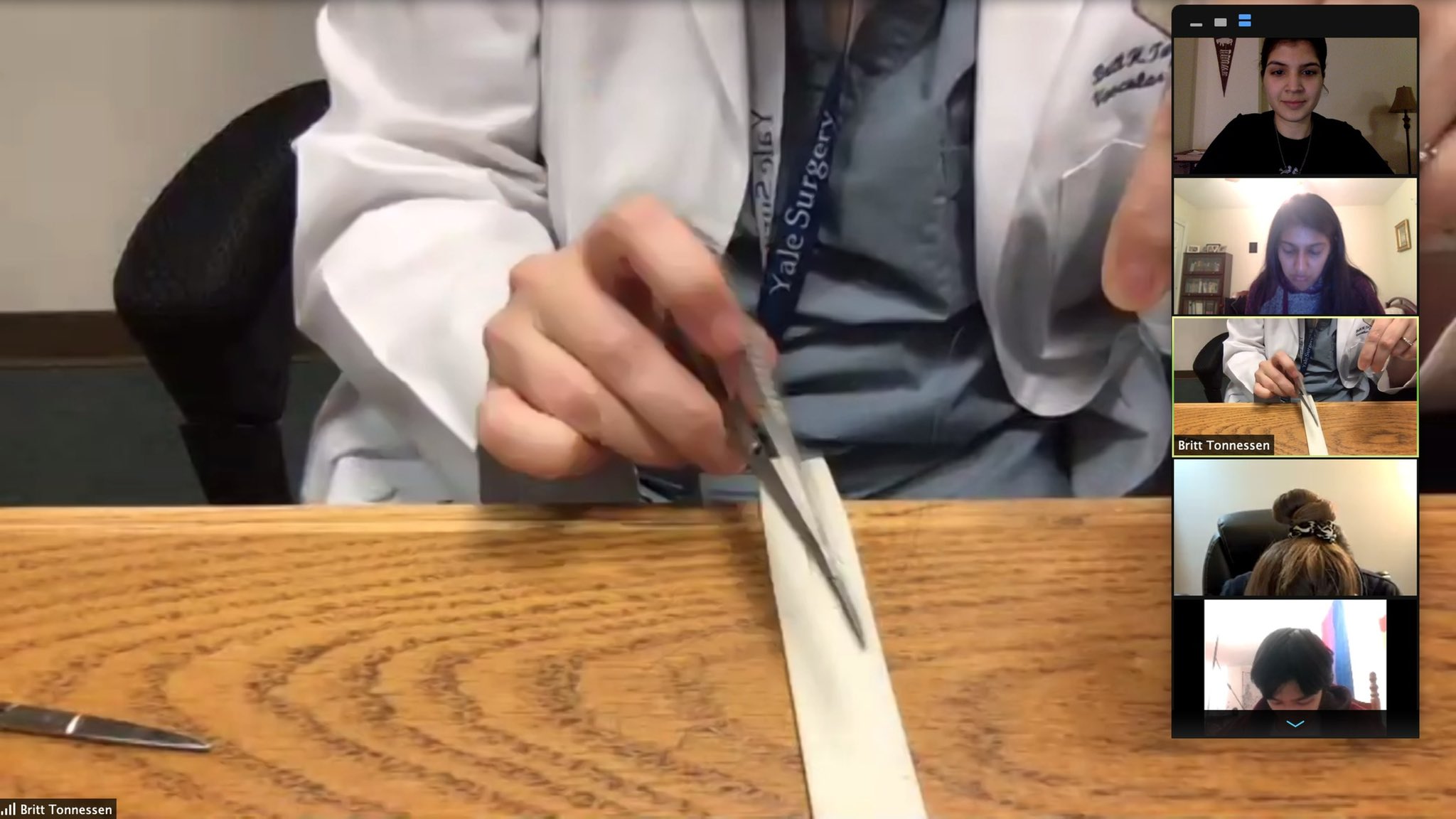 Chaar says they also worked with industry partners from Medtronic, who generously provided an endovascular simulator, so that the instructors could demonstrate how an endovascular abdominal aortic aneurysm (AAA) repair (EVAR) is performed.

In advance of the session, fourth-year YSM student Kirthi Bellamkonda, last year’s VESIG group leader, who is currently applying for vascular surgery residencies, prepared a video demonstration of the knot tying and suturing skills that the faculty were planning on teaching in the session. The student participants were instructed to watch it prior to the live session, to facilitate learning.

At the November 18 session, after a brief introduction, Brahmandam used the endovascular simulator to demonstrate how an EVAR is performed. Assistant Professor David Strosberg, MD, then explained the basic concepts of EVAR to the students, such as indications, complications, and the flow of the procedure. The students then were divided into several Zoom breakout rooms, with about six students each, led by Chaar, Assistant Professor Edouard Aboian, MD; Assistant Professor Jonathan Cardella, MD, FRCS; Chief Resident Tanner Kim, MD; Strosberg; and Associate Professor Britt H. Tonnessen, MD. The students practiced single-handed ties and suturing using castros, and the faculty provided students with constructive criticism and pointers to improve their technique. The session ended with faculty and residents answering students’ questions about careers in surgery in general, and vascular surgery specifically. 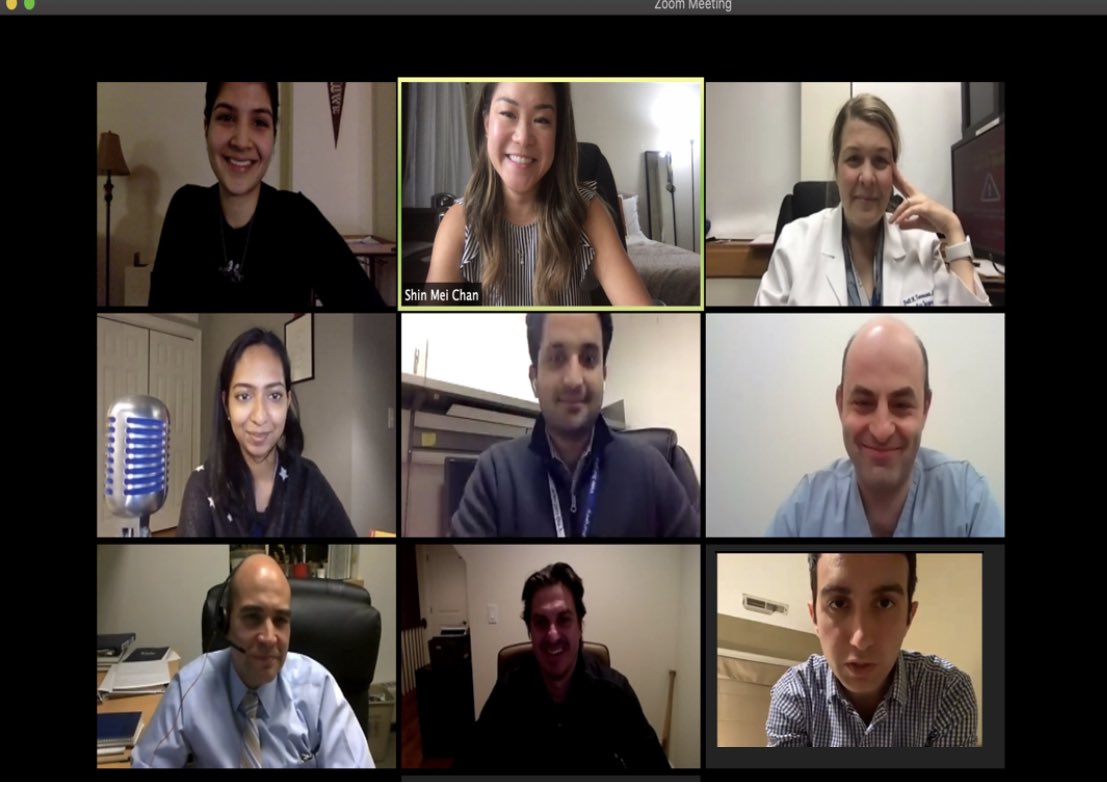 Chaar says that “teaching on camera was not easy. Sometimes, we had to switch our position to demonstrate the back of the hands.” Chan echoed this view, explaining she has gathered useful feedback that will help them improve future virtual sessions, such as having smaller breakout rooms, taking into account the orientation of the camera—which is flipped on Zoom, and using larger, more visible sutures to demonstrate, “so many things that you normally don't need to consider when this is all in-person.”

Despite these challenges, the session was uniformly viewed as a success, with over 50 students attending, many of whom had never tied or sutured before. “By the end of the event, many of them were able to pick up on these important skills, ” Chan says.

“Working with students and seeing them try and then succeed to get their first tie ever with proper technique was very rewarding and also eye opening for us,” says Chaar. “We were a bit skeptical in the beginning, but it turned out that virtual coaching could be more efficient than we thought.”

Chaar adds, “we were very glad to be able to continue the usual activities of our VESIG despite the pandemic,” and says, “the key to success was the enthusiasm of the students to learn and the will of the attendings to teach.” Chaar and Brahmandam both pointed to the critical role Chan, Gardezi, and Bellamkonda played organizing the session and engaging participants.

Chan, Gardezi, Chaar, and Brahmandam are considering a follow-up session early next year, with the hopes of expanding access to the session. Brahmandam explains that the November event was meant “to provide a glimpse into some of the procedures vascular surgeons perform. For future events, I think we would focus on one particular skill such as a vascular anastomoses, and perhaps identify different techniques to teach.”