Two scientists who are pioneering innovators of the imaging technology known as enhanced Focused Ion Beam Scanning Electron Microscopy (FIB-SEM) will be coming to Yale School of Medicine. C. Shan Xu, PhD, will join the faculty in the Department of Cellular and Molecular Physiology and Song Pang, MS, will lead collaborations using this technology via a FIB-SEM Collaboration Core. “The arrival of these two outstanding scientists will allow us to build upon Yale’s strengths in imaging and advance as a leader in cutting-edge imaging technology,” says Nancy J. Brown, MD, Jean and David W. Wallace Dean of Medicine. “Their expertise will have a major impact on basic science discoveries that will deepen our understanding of human biology.”

Almost 500 years ago Andreas Vesalius published De Humani Corporis Fabrica Libri Septem, a revolutionary anatomy text that was the first to contain illustrations of the human body based on observations from dissections. Vesalius instinctively knew that the human body could only be understood by developing a three-dimensional appreciation of how its tissues and organs fit together. While he was limited to what could be perceived by the human eye, today, sophisticated microscopy allows us to view the three-dimensional structure of tissues and organs at the cellular and subcellular level. This is fundamental to achieving scientific breakthroughs that drive medical advances. In 2018, Yale acquired the only focused ion beam-scanning electron microscope in the region. FIB-SEM opens up the possibility of examining cellular structures—and how they relate to one another—in three dimensions. “FIB-SEM is a beautiful tool that helps us connect form to function,” says Michael Caplan, PhD ‘87, MD ‘87, chair and C.N.H. Long Professor of Cellular and Molecular Physiology.

But the technology has limitations. It works as a kind of micro-machining tool that uses high-energy gallium ions to etch away ultra-thin layers of tissue that have been embedded in plastic, generating a series of images that must be painstakingly aligned and combined to create the final image. It’s a slow process in which only small volumes of tissue can be imaged over a period of several days. To image larger volumes would require operating for much longer periods of time, during which the process is inevitably interrupted due to ion source replenishment and system glitches that lead to defects in the final image.

Next Level Imaging with Enhanced FIB-SEM

At the Janelia Research Campus of Howard Hughes Medical Institute, where Xu currently directs FIB-SEM Technologies and Pang is a research application scientist in the FIB-SEM Technology Division, Xu is the lead inventor of enhanced FIB-SEM. This technology expands the imageable volume by orders of magnitude, achieves 3D isotropic resolutions of eight and four nanometers—about one 25,000th of the width of a hair—and improves its stability to reach 100% effective reliability. These advances enable the platform to continuously run for months or years instead of days and to generate images that, when assembled, are free of defects.

Enhanced FIB-SEM has enabled discoveries in tissue biology, cell biology, and the connectome—the system of neural pathways in the brain. Recently, it enabled an open-access high-resolution 3D atlas of whole cells and tissues, from cancer and immune cells to mouse pancreatic islets and Drosophila neural tissues. It was also used to image the circuitry of a large portion of the Drosophila brain, the largest and most detailed connectome to date. With 25,000 neurons and 4,00 cell types, it took two years and two microscopes to complete. The technology has continued to advance and allowed for the image acquisition of the entire Drosophila central nervous system, consisting of approximately 200,000 neurons, a yearlong process involving eight FIB-SEMs running in parallel.

Enhanced FIB-SEM will build upon and complement YSM’s existing strength in FIB-SEM, which was established within the Center for Cellular and Molecular Imaging (CCMI) Electron Microscopy Facility by its director, Xinran Liu, MD, PhD, who expertly oversees its operation. Yale investigators will have the opportunity to apply these technologies to an extraordinarily diverse palette of tissues and scientific questions. Pang and Xu are already collaborating with Yale researchers to explore structures that had never before been studied with such powerful imaging technology.

A New Generation of FIB-SEM

With 29 years of experience in technology invention and application development, Xu holds 22 patents and is actively involved in teaching courses and leading workshops on volume electron microscopy worldwide. At Yale School of Medicine, he plans to develop the next generation of FIB-SEM technology, aiming to further advance the 3D isotropic resolution and use cryogenic techniques to image cells in their native state (by cooling them to very low temperatures instead of fixing them in plastic) but at much larger volumes. Xu will also work to develop FIB-SEM into a tool that can report on much more than a specimen’s physical appearance. Electron microscopy generates black and white images that illustrate the structure of a specimen but provide little information on its chemical composition. By redesigning the ways in which the images are collected, he hopes to unlock a previously inaccessible trove of biochemical detail. 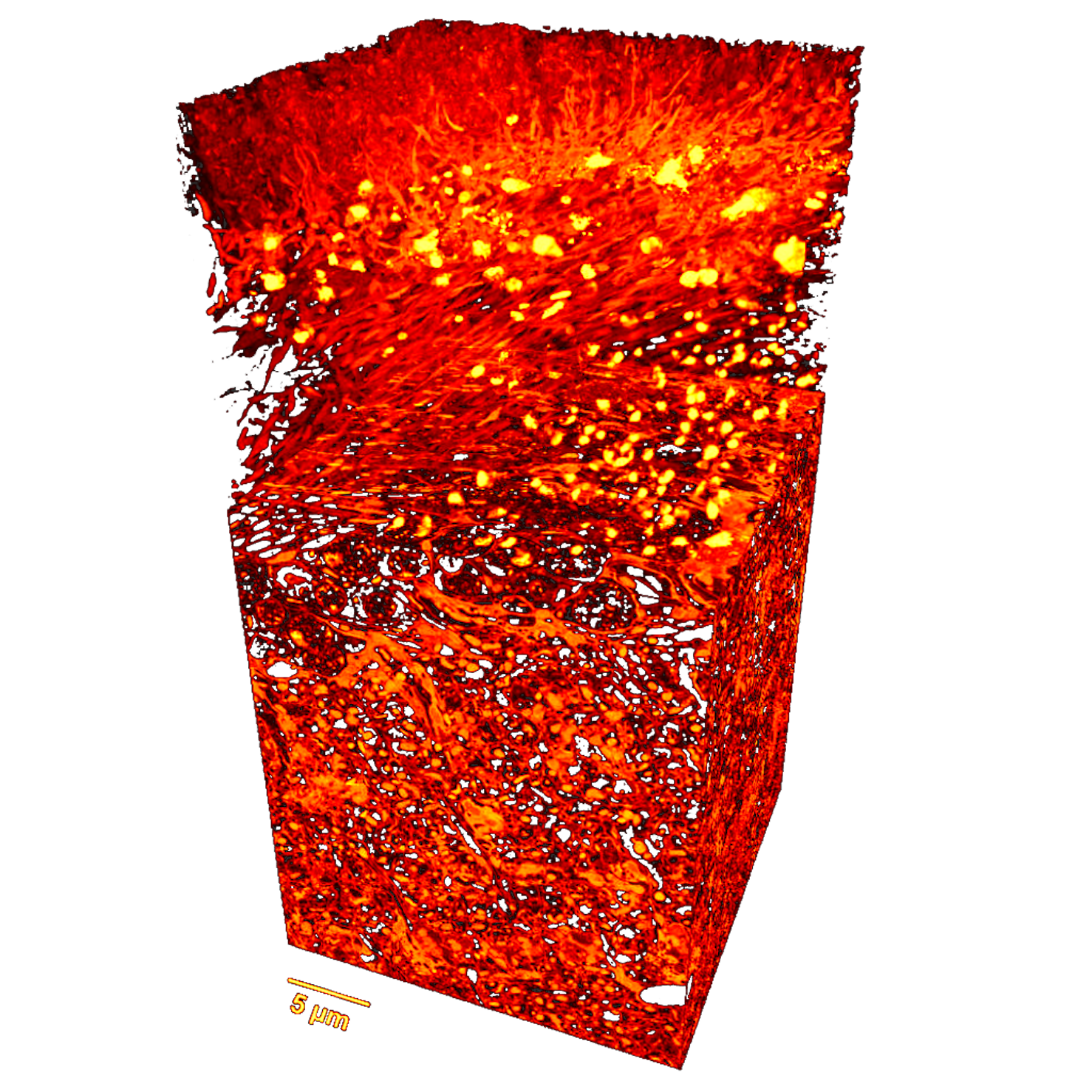 These improvements will allow scientists to better study the structure and relationships of molecules within the cellular environment. Scientists now understand that organelles within cells are in physical contact and communicate with one another, which affects the regulation of their function. “Enhanced FIB-SEM allows us to see those contacts and how they change as a result of different physiological stimuli,” says Caplan. “It will allow us to understand not only at a structural level how cells are organized, but also how that organization is shaped by and responds to stimuli.”

The arrival of Xu and Pang continues not only the legacy of Vesalius, but also Yale School of Medicine’s tradition of using imaging as a powerful tool for discovery. In the 1950’s, George Palade—a Nobel laureate who is widely considered the father of modern cell biology and was the founding chair of the Department of Cell Biology—recognized the power of electron microscopy. It wasn’t lost on Xu or Caplan, for whom Palade served as a thesis advisor, that Palade would have been awed by the images generated by enhanced FIB-SEM. Palade subscribed to the notion that form follows function, making Physiology, which connects the properties of molecules to the properties of higher order biological structures, the logical home for Xu and Pang.

Xu and Pang are eager to bring enhanced FIB-SEM to Yale for the opportunity to work with human tissue to create a connection between basic science and clinical models and develop robust datasets that researchers can mine. “We can combine this cutting-edge state-of-the-art technology with Yale’s world class scientists who can utilize it to enable their amazing discoveries,” said Xu. Added Pang, “What we really want to do is to cultivate a rich ecosystem from the image to data analysis to discovery.”