Students, residents, and faculty at the School of Medicine joined hands Monday in a line that stretched almost the length of Cedar Street, in a show of support for the Affordable Care Act (ACA). The act, also known as Obamacare, is under attack from President Donald Trump and Republicans in Congress who want to repeal it.

Monday’s action was replicated at 45 institutions in New York City, San Francisco, Chicago, Seattle, Boston, Washington, D.C., and other cities around the country.

“We want to send a clear message to Congress: do not repeal the Affordable Care Act. Improve it, but don’t repeal. We believe that we can build on the foundations that have been laid without destroying the progress that has been achieved,” said Priscilla Wang, a medical student who addressed the rally from the steps of the Sterling Hall of Medicine. 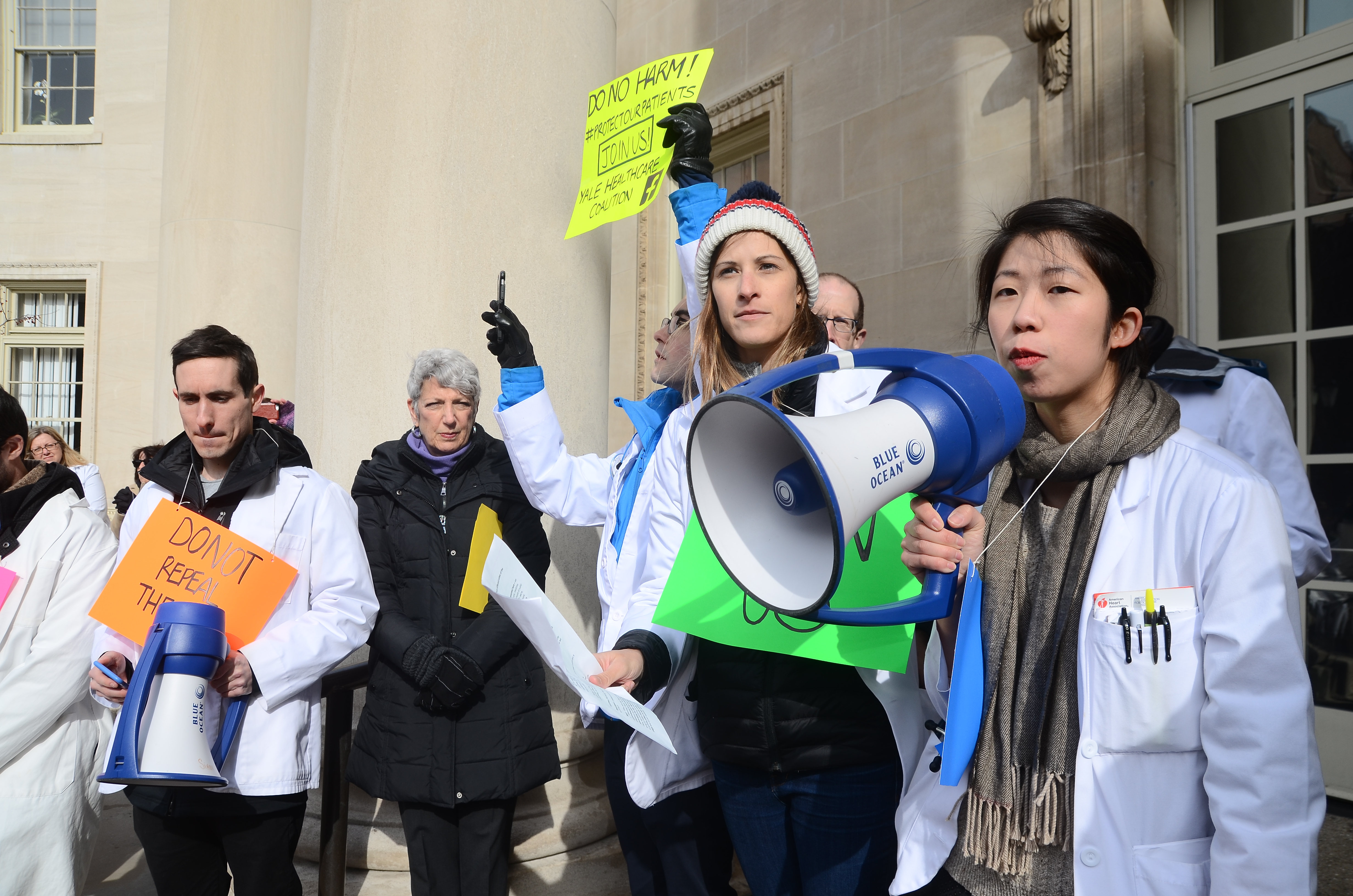 “I am offended, as an American, at the idea of repealing the ACA,” said Andree Delisser, on the faculty at the School of Nursing. “I am a psychiatric advanced practice nurse and some of my patients are the most vulnerable to access.” Among the vulnerable patients, she told the crowd of more than 100, is her 25-year-old daughter, who may soon lose her health coverage. “The idea of 20 or 30 million without health care is anonymous, so I brought my daughter’s picture so we can put faces and names to the people that are going to be losing health care.”

Matt Meizlish, a medical student in the M.D./Ph.D. program, told the crowd that although there are many issues posed by the new administration, students in the health professions have a special responsibility.

“There are a lot of concerns that we have. The executive order on Friday [on refugees and immigrants] was deeply troubling,” he said. “It is important to remember that we have a special obligation when it comes to health care. When we put on our white coats, we represent our patients. When we walk into a legislator’s office in our white coats, they know what you stand for, they know why you’re there. Let’s lend our voices everywhere they’re needed, but let’s lead when it comes to health care.”

The final speaker, medical student Eamon Duffy, urged leadership at the School of Medicine and at Yale New Haven Hospital to take a stand in support of the ACA.

“All of us are here today as individuals,” Duffy said. “We will pass through Yale’s doors, and Yale as an institution will remain. It is more important than ever for our institutions to speak out and show exactly what it is that the names Yale School of Medicine and Yale New Haven Hospital stand for. We believe that they stand against repeal of the Affordable Care Act and we hope that they will make that their public stance.”

The students then moved along Cedar Street and, in two groups, began a call and response chant. “Protect our patients,” chanted one group, then the other responded. “Do no harm.” 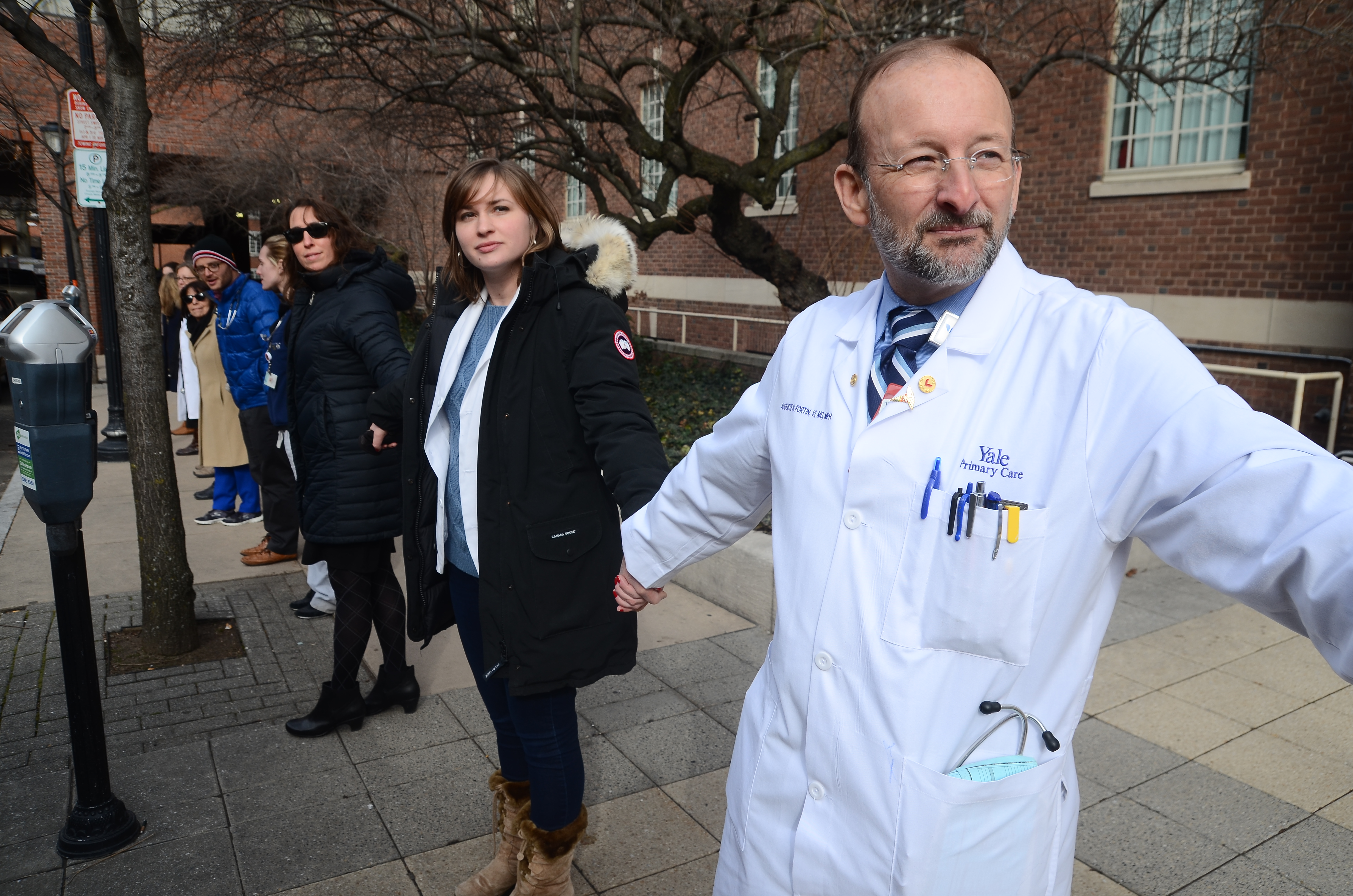 The action in support of the ACA came the day after a candlelight vigil held in Yale’s Cross Campus on Sunday, in solidarity with refugees and immigrants affected by President Trump’s executive order, signed Friday afternoon, which bars any refugees from Syria indefinitely, suspends all refugee admissions for 120 days, and blocks entry to citizens of seven majority-Muslim countries for 90 days. About 1,000 people attended, listening to remarks by Chris George, executive director of New Haven’s Integrated Refugee and Immigrant Services, a representative of Yale’s Muslim Students Association, and Omer Bajwa, Yale’s Muslim chaplain. The 30-minute vigil ended with chants of “We are here, and we’re not going away!”

After Trump’s election, medical students formed the Yale Healthcare Coalition to pressure lawmakers to oppose the repeal of the ACA. The coalition has organized phone banks to call senators, garnered 4,700 signatures on a petition circulated among medical students around the country, published a defense of the ACA in the Huffington Post, and on Jan. 9 participated in a national three minutes of silence to show their support for affordable care. Many students also traveled to Washington, D.C, to participate in the Women’s March. 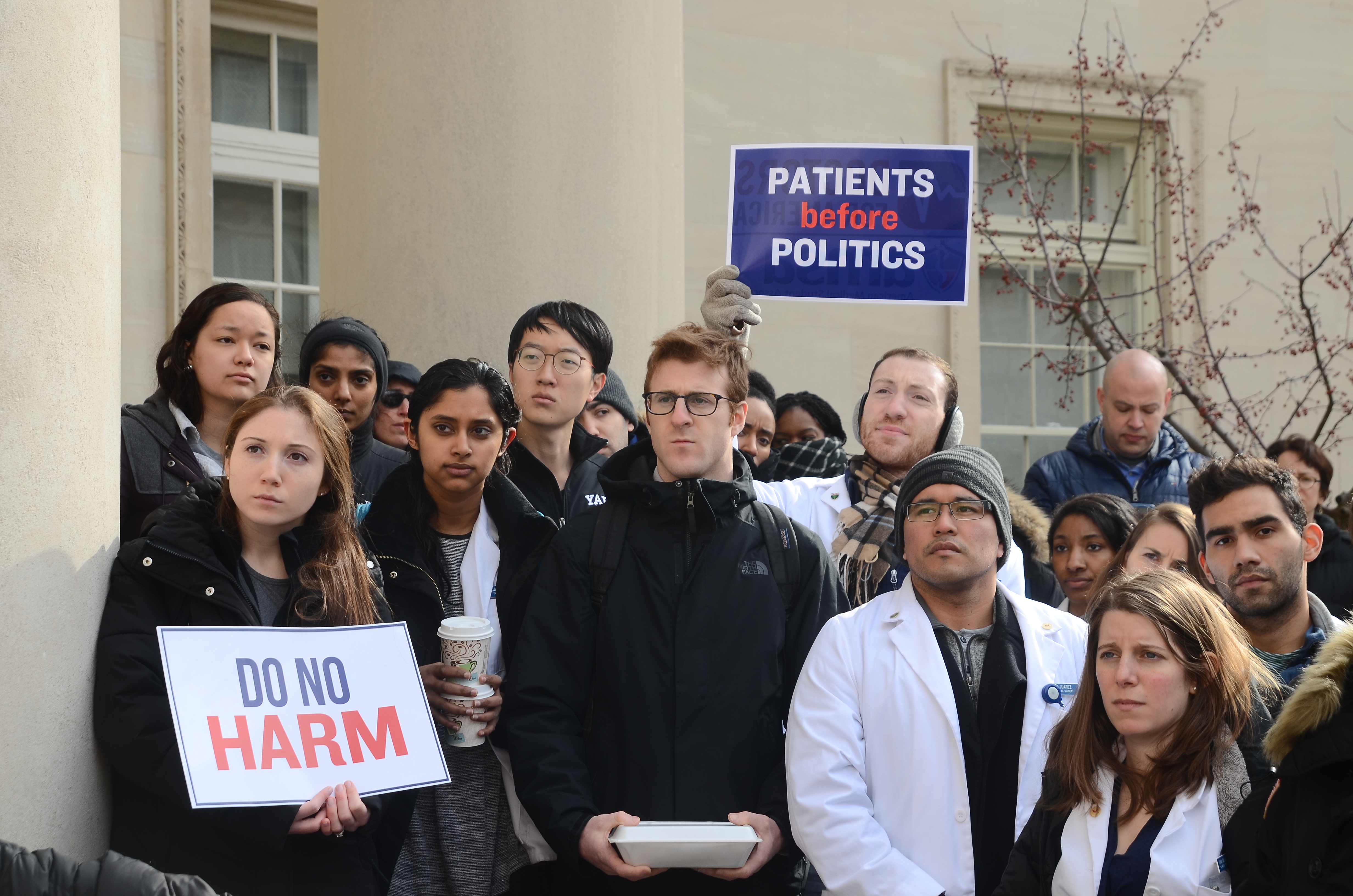 Opponents of the ACA, including U.S., Rep. Tom Price, a Republican from Georgia, a physician, and Trump’s nominee to serve as Secretary of Health and Human Services, want to repeal most of the ACA in favor of a "market-based" approach. As a congressman, Price offered a plan that includes tax credits based on age, rather than on income, as the ACA does.

In 2014, many students now working to save the ACA were involved in a project to encourage New Haven residents to enroll in the health care program. Students for a Better Healthcare System visited churches, colleges, and other community centers to speak about the importance of the ACA. For more on that initiative, click here.