Gay Hyre of West Haven was among about 3,000 people who braved intermittent rain and chilly temperatures to join in the March for Science New Haven on April 22. The event was one of hundreds of marches worldwide on the 47th anniversary of Earth Day to protest President Donald J. Trump’s proposed cuts to research, public health, and environmental protection and his administration’s disdain for accepted scientific fact on such issues as climate change.

Unlike many in the crowd at College Woods in East Rock Park, Hyre was not a researcher, doctor, or scientist. Her reason for coming was personal. Medical science saved both her and husband’s lives, in her case from cancer, in his from a life-threatening accident.

“If it wasn’t for science, both me and my husband wouldn’t be here,” Hyre said. “It’s too important not to be here.” 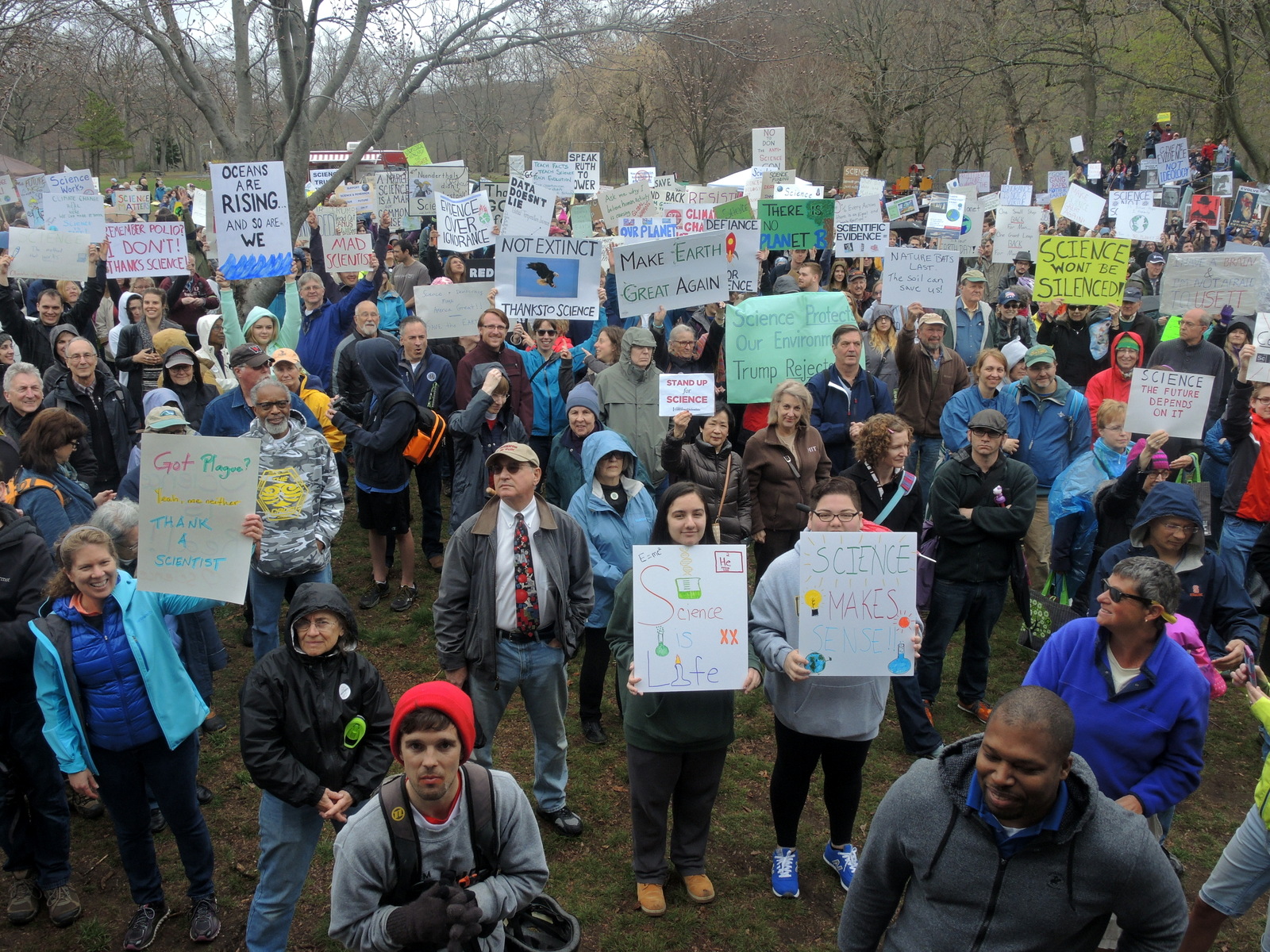 Overcast skies and occasional drizzles didn’t dampen the ardor of the protestors, who included Yale students, researchers and faculty members. They packed the park to listen to speeches, wave signs, and march about 1.5 miles through the city’s East Rock neighborhood. Among the messages on the numerous homemade placards: “Data not Demagoguery,” “Reality is Non-Negotiable” and “Don’t Let This Tweaker Take Away My Beaker.”

Robert Means, Ph.D., an associate research scientist in the School of Medicine’s pathology department, decked himself out in a lab coat on the back of which he wrote, “Defunding Science = Bad for Earth, Bad for Medicine, Bad for America.” The president’s proposed 18 percent cut in the budget for the National Institutes of Health would likely result in less money for his work, he said. “It seems there’s an unprecedented attack on scientific funding,” Means said.

Diane Krause, M.D., Ph.D., associate director of the Yale Stem Cell Center, and one of the march’s organizers, introduced more than a dozen speakers, who ranged from researchers and elected officials to a Guilford High School student. The speakers praised the crowd and urged them stay amped up and involved. Several called on scientists to abandon the notion they should eschew politics and instead aggressively advocate for science. “Scientists cannot afford to sit quietly in their ivory tower, especially in these times,” said Laura Grabel, the Lauren B. Dachs, Professor of Science and Society at Wesleyan University. “It’s time to speak up.” 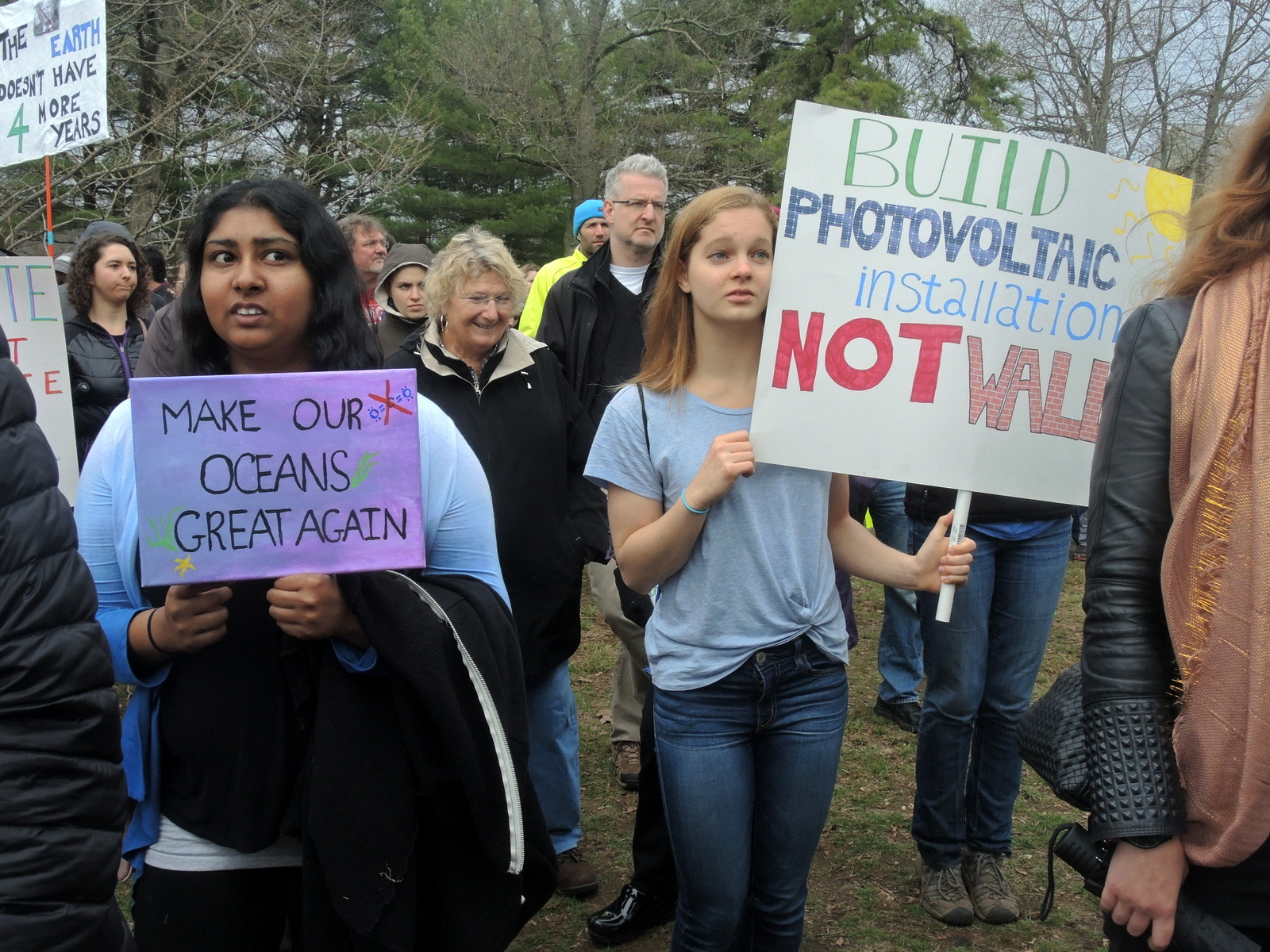 To illustrate the consequences of defunding, Gregg Gonsalves, an HIV/AIDS activist and lecturer at the Yale Law School, held up a medicine bottle and told listeners that he would die without the pills inside. Governments that ignore scientific fact and underfund research pay a terrible price, citing HIV and Ebola epidemics as examples, he warned. He urged each member of the audience to adopt an agency or program and fight for its funding.

Daniel Colon-Ramos, PhD, an associate professor of cell biology at the School of Medicine, likened research to an intricately interconnected ecosystem. Pull on one part and it collapses, he said. A seemingly modest cut of 20 percent will ripple through a program, potentially crippling it. “When you are cutting the program by 20, 10, 30 percent, you are destroying the legacy,” he said. Colon-Ramos, who brought his 7-year-old triplets to the march, said they were the reason he came. “They will benefit or not from the political decisions that are made today,” he said. He then noted that his triplet daughters, Alexandra, Beatriz, and Caysani, who stood on stage with him, were celebrating their 7th birthday. In honor of the day’s event and the girls, he led the crowd in singing “Happy Earth Day.” 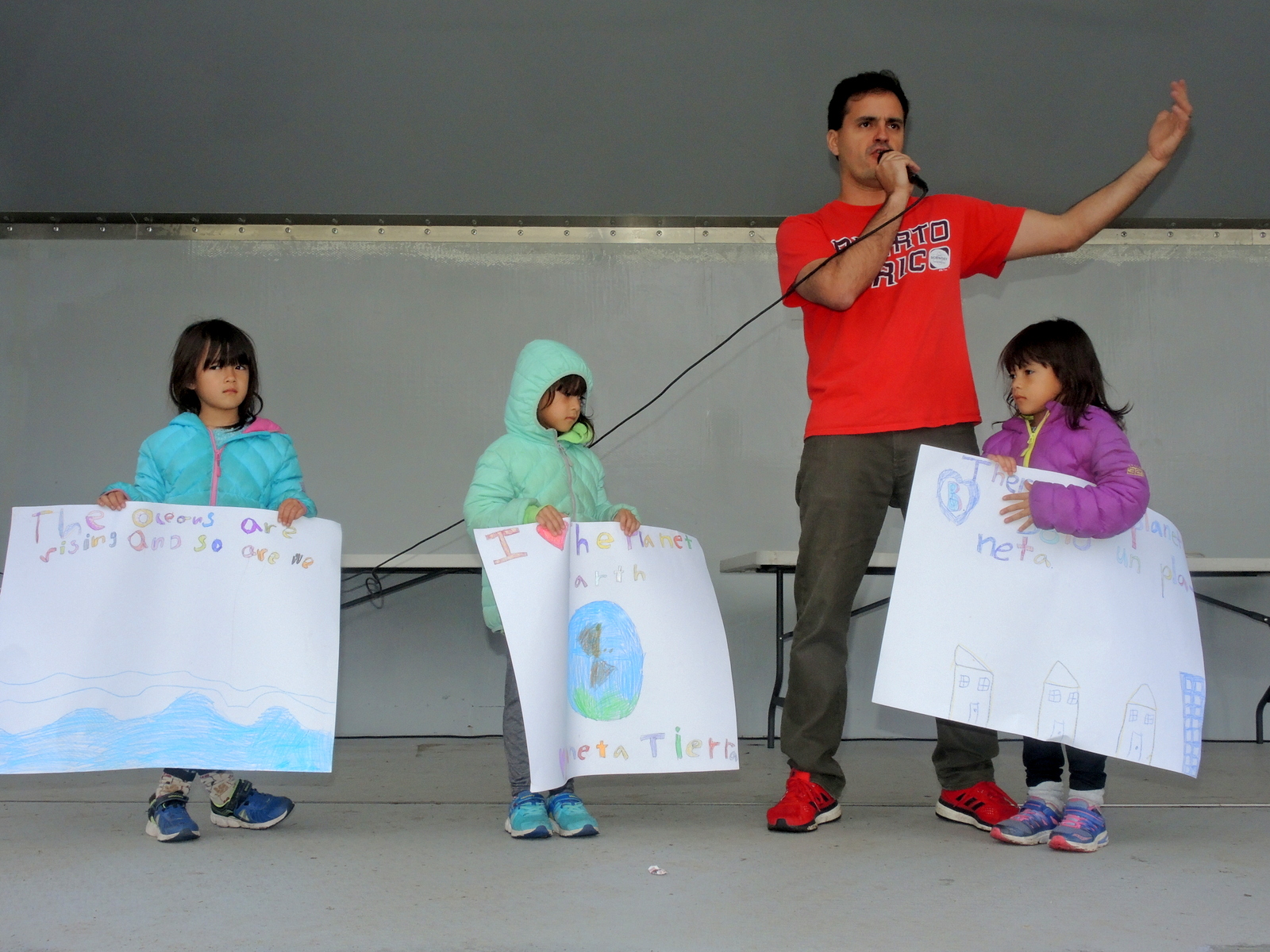 State Senate President Pro Tempore Martin Looney of New Haven noted that ideologically motivated attacks on science are nothing new. He cited the Catholic Church’s silencing of Galileo and the Scopes Trial in 1920s Tennessee as examples. Climate change denial is the 21st century equivalent, he said. “We have to battle this at every level, state, national, local, and recognize that we are not going to be stampeded by a political agenda that denies the reality of science,” said Looney, earning one of the day’s biggest cheers.

Connecticut’s senior U.S. senator, Richard Blumenthal, struck a similar chord, blasting Trump and pledging unrelenting resistance to his science-hostile policies. “No matter what he may say, truth trumps Trump. That’s why in the end science will not be silenced,” Blumenthal said to cheers from the audience. 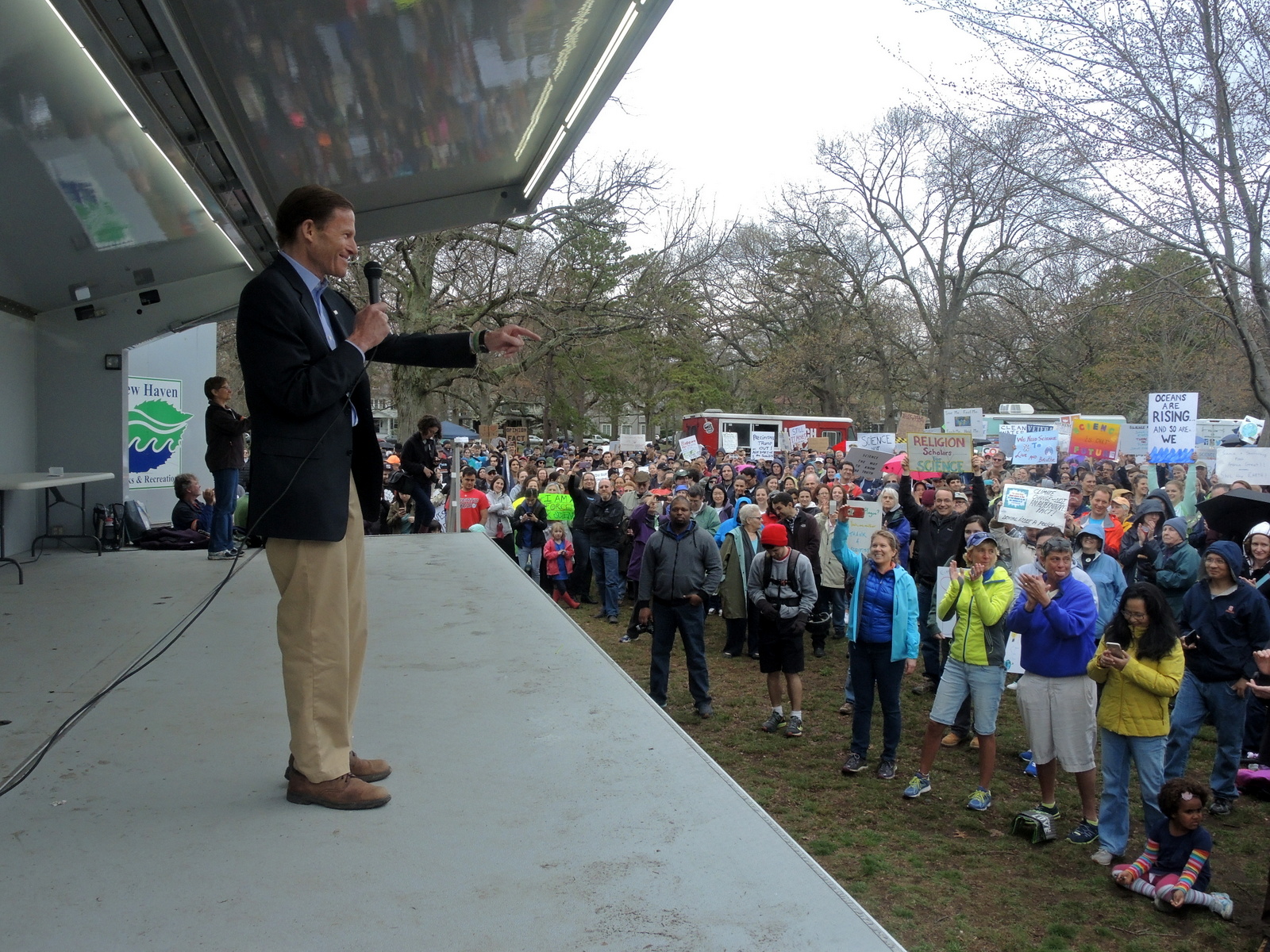 After an hour of speeches, the crowd streamed from East Rock Park into the city’s streets waving signs, marching from Orange Street to Whitney Avenue and back to the park. Along the way, the marchers broke into chants like, “Hey, Hey, Ho, Ho, Ignorance Has Got to Go” and “Say it Loud, Say it Clear, Science Facts are Welcome Here.”

Rob Curry held up one of the day’s most elaborate signs. Entitled “Periodic Table of Incompetence,” it arranged photos of Republican and GOP-sympathetic media figures in the form of the periodic table of elements. Curry estimated the sign took seven hours to complete. Why did Curry, a real estate agent, not a scientist, put so much effort into the placard?

“I just thought it was a pretty big cause,” said Curry, who was accompanied by his friend Kyra Prats, an environmental scientist at the Yale School of Forestry and Environmental Studies. 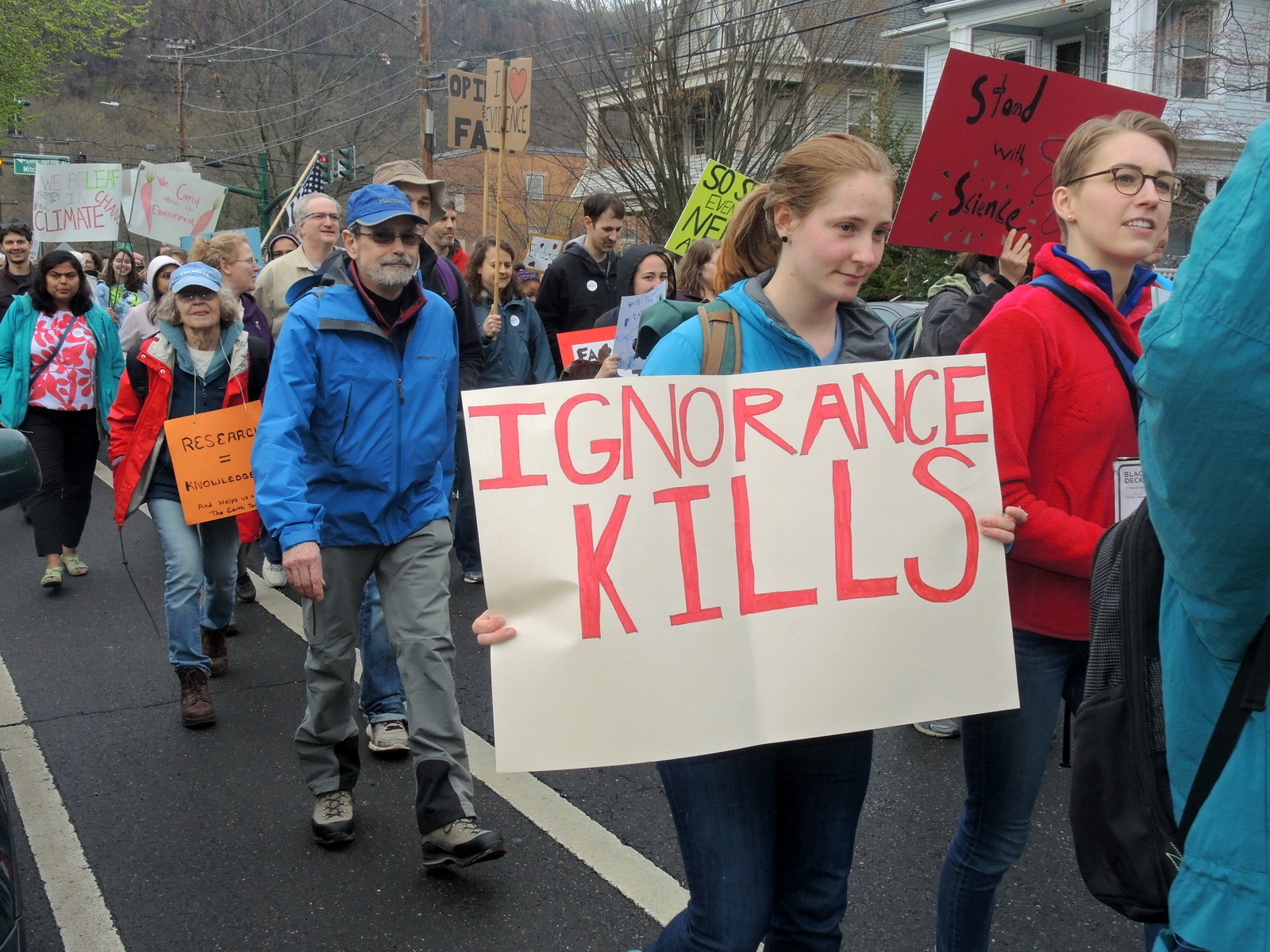 Aric Isaacs, an arts educator, summed up his reason for marching in six words: “Making policy without evidence is voodoo,” he said.