Integrating the Influence of Sex & Gender on Health into the Curriculum

Men and women are different. And there is more to those differences that affect our health than we might immediately grasp.

“Medical education has traditionally focused on reproductive health when considering women,” said Dr. Njeri Thande, a cardiologist and Assistant Professor at Yale School of Medicine. “But we know that women’s health is that and more.”

And we know that differences, both biological and social, between men and women hold consequences for their health.

For example, women suffer more often from osteoporosis and non-contact sports injuries. Recommendations for taking aspirin to prevent a first heart attack or stroke differ for men and women. If a woman drinks the same exact amount of alcohol as a man, more often than not the woman will get more intoxicated and it will happen more quickly, even if they weigh the same. Women suffer more often from Alzheimer’s Disease and other dementias. Among all Americans suffering from autoimmune disease, 75 percent are women. Women are less likely than men to receive adequate pain medication for chronic pain.

Those are just some of the differences discovered by researchers since they have begun including women in clinical studies over the last two decades.

“A comprehensive understanding of women’s health is important, including patient sex and gender as significant factors in medicine,” Thande said. “Gender is a complex sociocultural identity. I was never more aware of the complex interplay between gender and health than when I had to discuss the cardiac implications of hormonal therapy with one of my transgender patients who had coronary artery disease. To practice good medicine, physicians and our students need to be sensitive to the complex identities of their patients.”

But it’s unclear how many students are getting this message. In a 2016 study, researchers at the Mayo Clinic surveyed 271 residents across the health organization’s campuses and found that 55 percent of the respondents reported only occasionally having an instructor discuss how a patient’s sex or gender affected diagnosis or treatment. Sixteen percent of the residents reported never having an instructor address sex or gender as influencing a patient’s care.

To advance this shared goal, Mazure worked last year with Yasmin Zakiniaeiz, a graduate student pursuing a Ph.D. in neuroscience, on an issue of the student-run Yale Journal of Biology and Medicine dedicated to sex and gender topics. Inspired by the experience, Zakiniaeiz is collaborating with Dr. Michael Schwartz, Director of Medical Studies in Neurobiology and Associate Dean for Curriculum, to add the study of sex differences in the brain to the curriculum of the first-year neuroanatomy course she helps teach.

But to take a more holistic step, Mazure and Thande are working with the medical school’s administration on integrating a focus on sex and gender into the curriculum. Their goal is for faculty to teach the latest findings concerning sex and gender across different disciplines, countering false assumptions and leading to more efficient medical care with better outcomes for patients.

“We want the best for our patients,” Thande said. “To get the best outcomes, we need to practice individualized medicine, which must include a consideration of sex and gender, along with other important biological and sociocultural determinants of health. For example, we know that women are less likely than men to get adequate treatment for pain. We know that black patients are less likely than white patients to get adequate treatment for pain. Hence, one can suspect that a black woman’s presumed lack of believability is compounded by the intersection of her identities.” 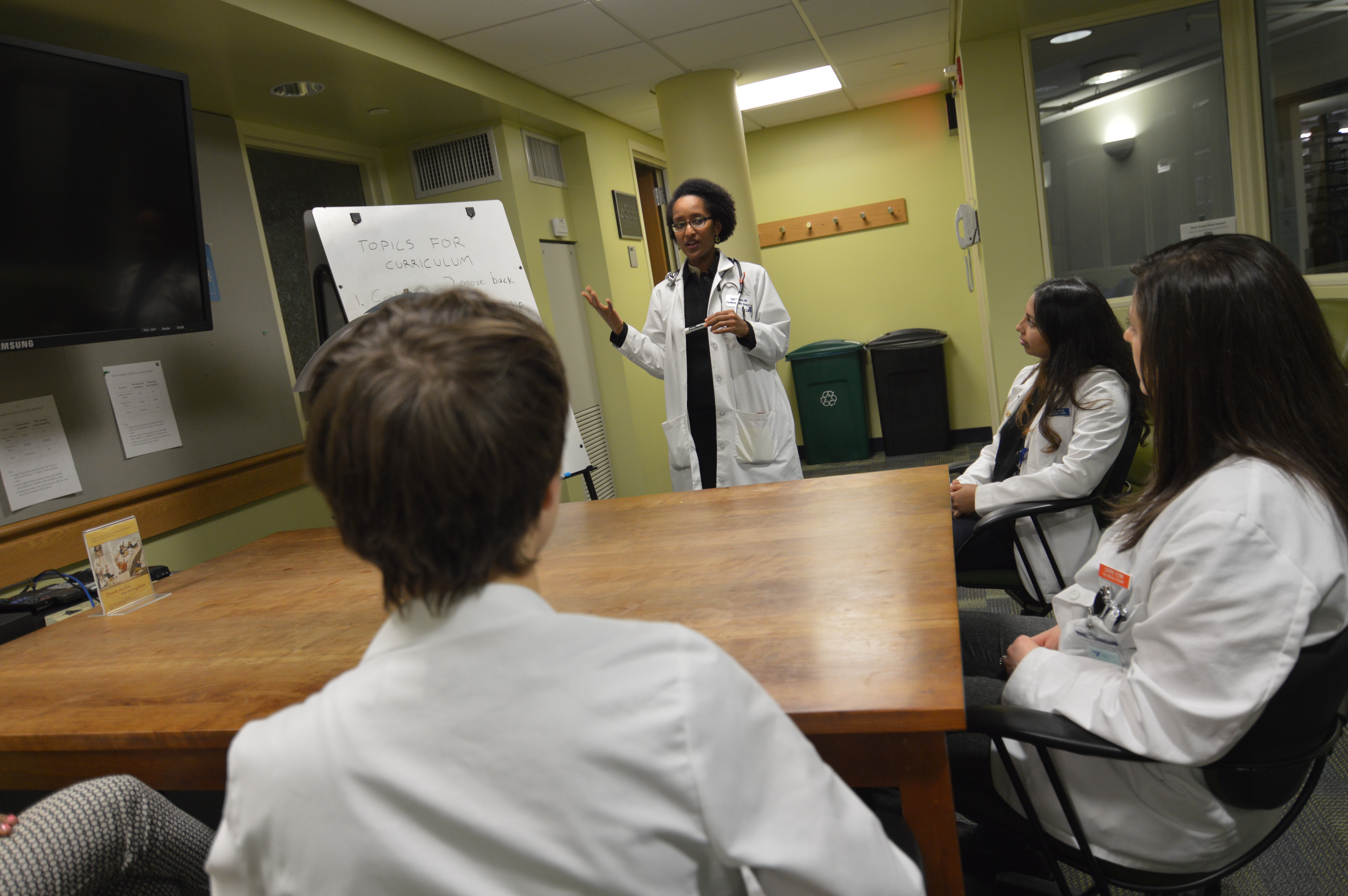 In collaboration with the educational leaders at YSM, Thande has undertaken an assessment of how students are taught about sex and gender influences on health during their first and second year courses.

She selected six first- and second-year students to help create and administer a survey asking questions about the sex and gender content of their classes. Questions include: When a research study is discussed, is there any mention of the sex or gender of the subjects and whether or not the results were analyzed by sex or gender? Is there any discussion of gaps in knowledge due to an absence of basic or clinical research surrounding sex and gender aspects of health? Is there a discussion of how sex and gender influence the presentation of disease? Is sex/gender discussed as a binary category? How much time was spent on the subject matter? And which specific topics could have been presented through a sex and gender lens but weren’t?

Over the summer, Dr. Thande analyzed the data and began working with her students on a report to present to the school’s curriculum committee with proposals for potential changes. She also reviewed the clerkship curriculum to get a sense of what opportunities exist to integrate sex and gender research beyond the students’ first two years.

Thande noted how the effort aligns with the school’s mission to “educate and inspire” the next generation of medical practitioners and leaders, “advance medical knowledge to sustain and improve health,” and “provide outstanding care and service for patients.” And she stressed the need to work the topic into all pertinent aspects of the curriculum as opposed to offering a stand-alone course or lecture.

“We want out efforts to be sustainable,” she said. “We want students to understand that sex and gender aspects of health are not to be considered independently. I hope they learn to adopt a sex and gender lens that impacts every aspect of their medical research or practice. And that won’t happen if it’s taught separately.”

She recognized potential cost savings for the medical industry, noting that drugs have been recalled and dosing changed because of inadequate assessments of efficacy and safety concerning sex. And refocusing on sex and gender shouldn’t cost more time and money.

“It’s just a different way of presenting the same content,” she said.

Thande, the Co-Director of the Homeostasis (cardiovascular, renal and pulmonary physiology and pathophysiology) integrated course for first year medical students, understands the challenges of changing or adding content to curriculum. But she expressed hope that the administration will embrace the challenge to better prepare students for the reality they will face when treating patients.

“We need to get this information to the students early,” Thande said. “Then they will spend the entirety of their careers conscious of how the influence of sex and gender affects health.”