Adele Ricciardi navigates the corridors and stairways of the Hunter Building with practiced ease. The School of Medicine has come to feel like home, after six years spent in its labs and classrooms.

“When I came to medical school, I wanted to find research that was translational, bridging the gaps between basic science and medicine,” Ricciardi says. There’s no doubt she’s found it at the School of Medicine. Ricciardi spends her days in three different labs, bridging gaps and translating research across campus—and disciplines—in the pursuit of her M.D./Ph.D. degrees. 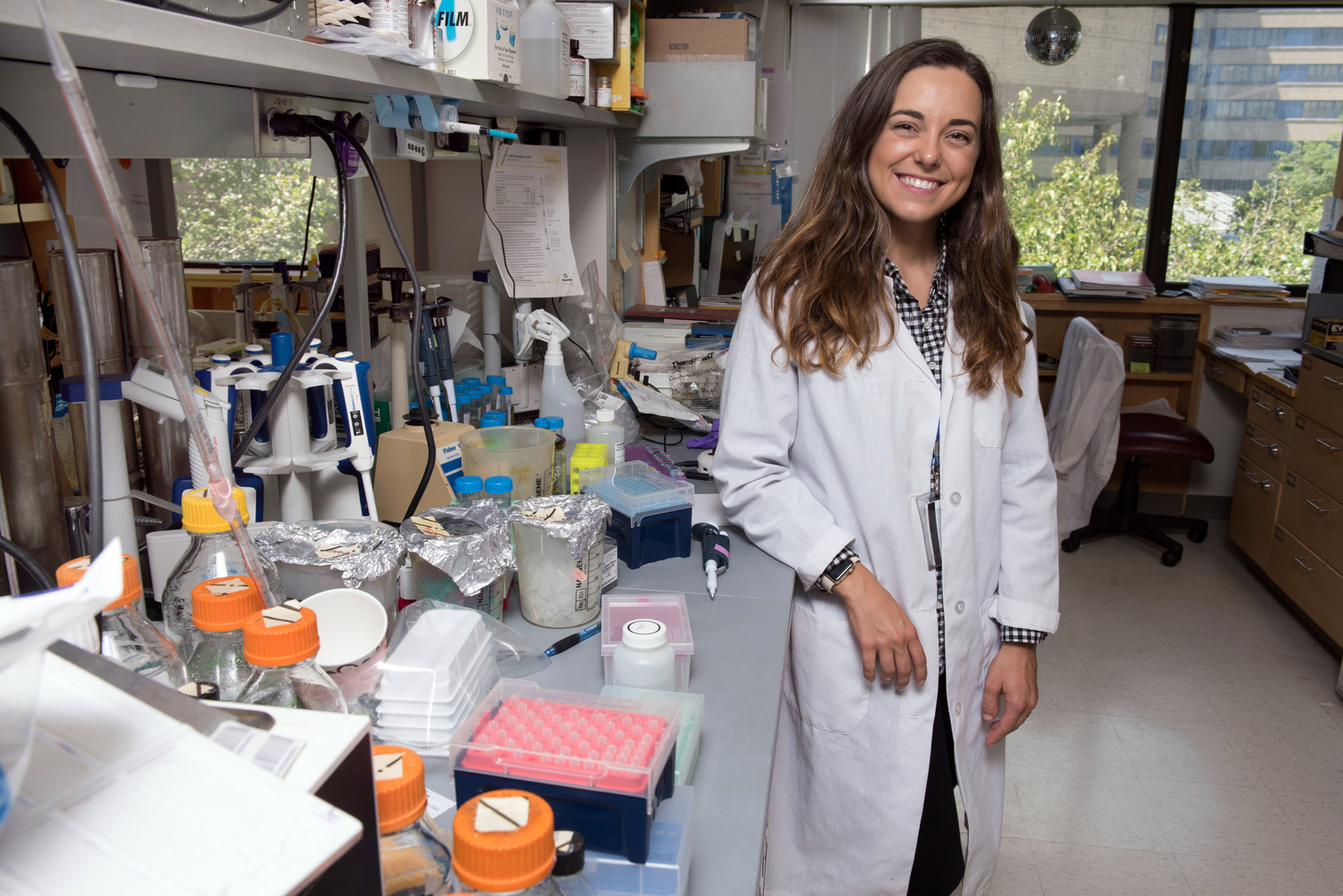 Ricciardi’s work is necessarily multifaceted. In the landscape of medical research in general, and at the School of Medicine in particular, the junctions of traditionally disparate fields are yielding prolific harvests. Collaborative research among Ricciardi’s home-base labs has produced a gene-editing tool more precise than the much-lauded CRISPR/Cas9, developed a nanoscopic vehicle to deliver it, and identified genetic ailments that it might alleviate. The tool, triple helix, was developed in the lab of Peter M. Glazer, M.D. ’87, Ph.D. ’87, HS ’91, FW ’91, chair and Robert E. Hunter Professor of Therapeutic Radiology, and professor of genetics. Triple helix’s merit is thanks to a collaboration that goes back nearly a decade.

In 2009, Joanna Chin, M.D. ’10. Ph.D. ’10, presented her research on triple helix at an annual M.D./Ph.D. retreat. The DNA-editing tool was promising, but ferrying it safely into cells was proving a seemingly intractable challenge. Fortuitously, the nearby poster of Nicole Ali McNeer, M.D. ’14, Ph.D. ’14, illustrated the development of nanoparticles that could deliver complex molecules—like, say, DNA—right to the heart of cells. Each quickly realized that the other’s project solved a problem in her own: Chin had an editing tool without a delivery vehicle, while McNeer’s nanoparticles were ferries in want of a payload.

“Everybody realized this was a perfect synergism,” says Glazer, who was Chin’s principal investigator. In the eight years since Chin and McNeer’s serendipitous meeting, the synergism has expanded to produce numerous papers and involve many more researchers. “It’s been a tremendously productive collaboration,” says W. Mark Saltzman, Ph.D., the Goizueta Foundation Professor of Biomedical and Chemical Engineering, and professor of cellular and molecular physiology, who was McNeer’s principal investigator.

Elias Quijano, an M.D./Ph.D. student, also works in the labs of both Glazer and Saltzman. Initially an English major at Yale College, a class with Saltzman turned Quijano into a biomedical engineering major, and later Saltzman’s lab manager. He’s now involved in the triple helix research, but that class he took as an undergraduate sparked his interest in biomedical engineering and medicine. 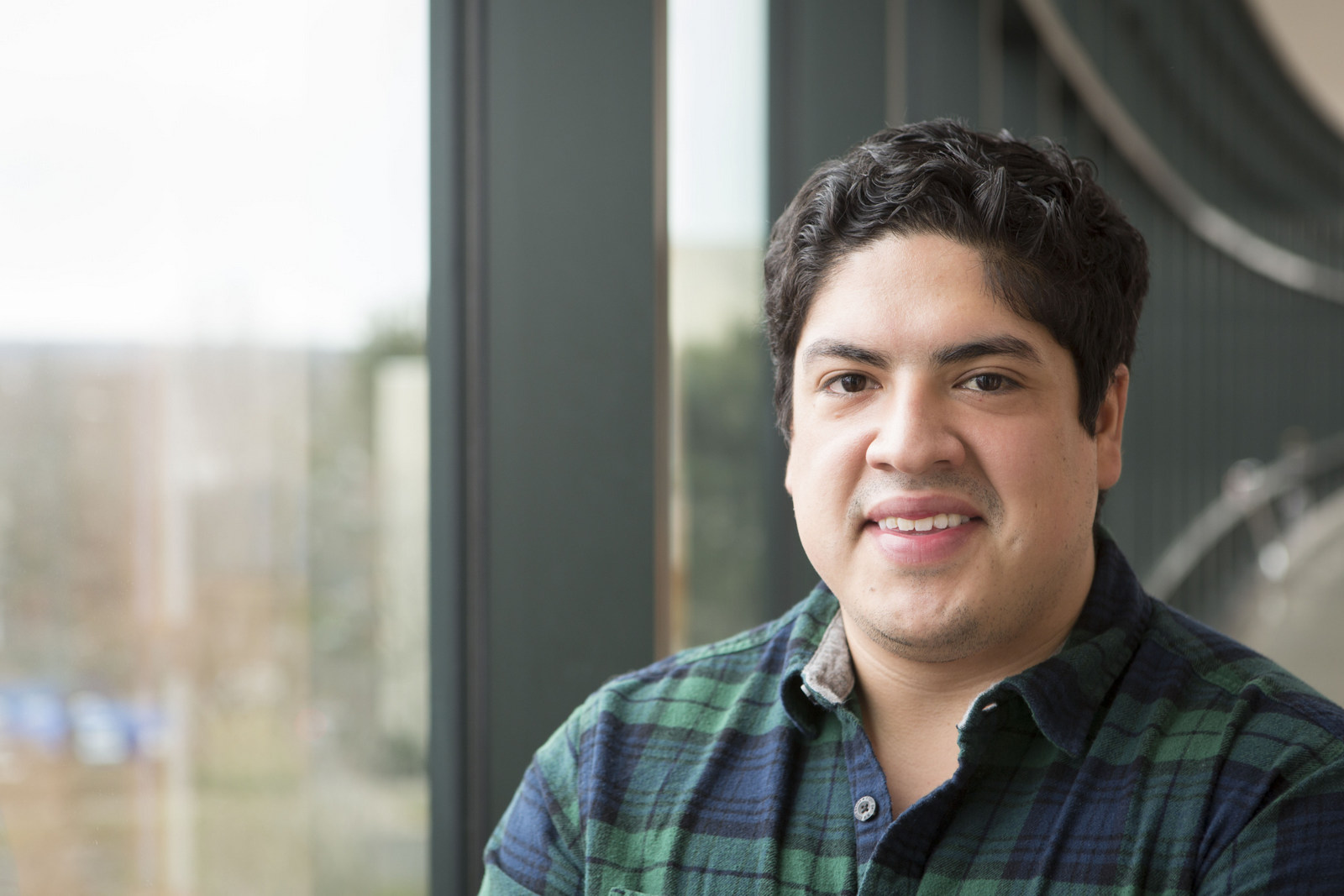 “It really came from seeing that first example of how science could enter clinical medicine,” he says, “and how a clinical need could drive the scientific process itself. I think seeing that interplay—seeing that dance between science and medicine—was something that really attracted me to the field.”

Like Quijano, Ricciardi works on basic science in the labs of both Saltzman and Glazer, refining nanoparticles and the genetic payload for them to deliver. She gets her clinical fix in the lab of David Stitelman, M.D., professor of pediatric surgery. “I had an interest in engineering,” Ricciardi says, “because I thought it married well with medicine.” The union means she can “apply science in a very human way”—a prospect eliciting such excitement that it gives her goose bumps. At this stage, the applied science is operating in mouse models, but the human implications are palpable.

“If you can essentially cure a disease, or eliminate the symptoms of a disease with very few off-target effects—I think there’s a huge unmet need there,” Ricciardi says.

Ricciardi strides down a final corridor and pulls out her ID to unlock the Glazer lab. After greeting lab mates and consulting one of several hefty lab notebooks to check the DNA concentrations in her upcoming experiment, Ricciardi glances at the current research subject: F8 571. From the outside peering into the enclosure, the scurrying creature is an ostensibly average mouse. On the molecular level, however, something is dangerously amiss: A single point mutation in the mouse’s DNA codes for a rare but injurious blood disorder, thalassemia. The condition is characterized by weak, quickly expiring red blood cells and resulting anemia. The tantalizingly miniscule genetic error and its outsize consequences are fueling the efforts to rewrite the code—not only for this mouse or this disorder, but for such notorious conditions as cystic fibrosis and sickle-cell anemia in human patients.

The genetic revision begins with a DNA analog (peptide nucleic acid, or PNA). Encased in a nanoparticle, the PNA gains access to cells’ DNA—and the disease-causing mutation in it. Guided by its sequence, which will seek out its match in the DNA, the engineered PNA snakes alongside and around the snippet of erroneous DNA, gently dislodging and taking the place of its partner strand. Binding to either side of the DNA, this new filament distorts the classic ladder-like helix to form a temporary triple helix: PNA-DNA-PNA. This aberrant arrangement sets off warning bells in the cell’s machinery. The perturbed cell senses the distended bulge in its genetic makeup—much as you would a pebble in your shoe, Glazer says. The conspicuous arrangement spurs the cell’s repair mechanisms, which hasten to slip a pristine piece of donor DNA (also delivered by the nanoparticle) into the damaged gene, repairing the initial mutation. 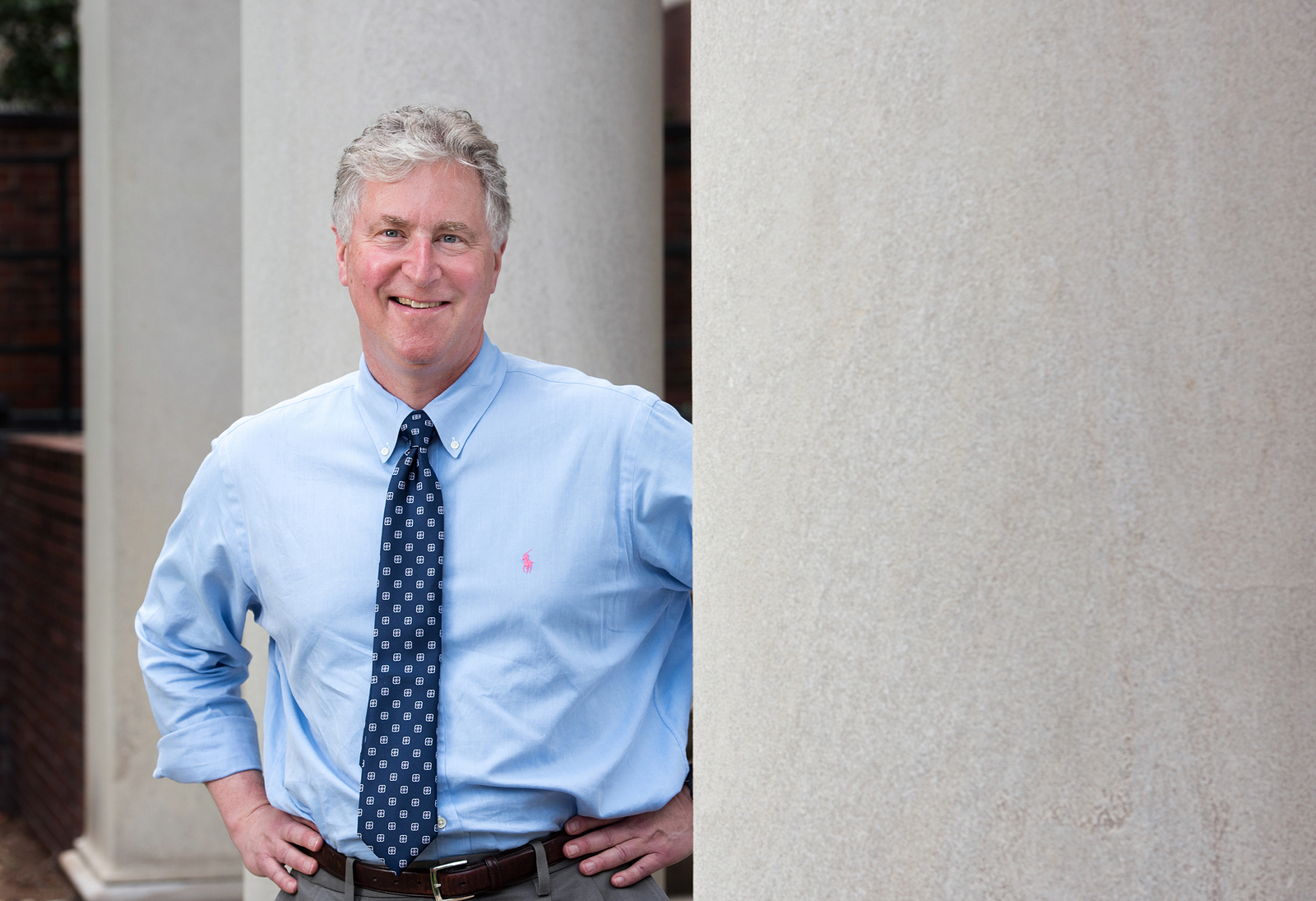 Triple helix has been used to correct the thalassemia-causing mutation in a mouse model. “We cured mice of anemia,” Glazer says. “We did four injections of nanoparticles, and 30 days later, they were cured.” The technology is less active than the common gene-editing CRISPR/Cas9—repairing about 5 percent of target cells, while CRISPR will act in 30 to 50 percent. However, the off-target effects (creating unwanted mutations elsewhere in the genome) are also much lower in triple helix than in CRISPR—10,000- to 100,000-fold lower. “I think people will improve the CRISPR nuclease to make it a little bit less promiscuous—but we’re already there,” Glazer says. “I think we have fewer off-target effects than CRISPR will ever be able to get to.” Glazer expects triple helix to be in a clinical trial within two years.

“We’re now at a stage where we’ve had advancements in PNA design and advancements in drug delivery converging,” Quijano says. “We’re getting to a place where both technologies are ready for clinical translation.”

For many, the prospect of human gene editing raises the unsettling specter of a dystopian world in which elites create custom children with enhanced mental or physical agility—or even purely aesthetic characteristics such as a specific eye or hair color.

“I have very distinct memories of being in my high school biology class, and them wheeling in the TV on the cart and watching Gattaca,” says Ricciardi. The 1997 film starring Ethan Hawke portrays a future world in which genetically engineered children excel, while natural ones come up against continual prejudice. The work coming out of the Glazer and Saltzman labs has a more virtuous goal. “We are not trying to introduce favorable characteristics such as improved intelligence or athletic ability or musical prowess. What we’re trying to do is eliminate the burden of disease in children,” Ricciardi says. “There are kids with genetic disorders who will be going to doctors’ appointments for the rest of their lives. They’re going to be taking chronic, expensive therapies to help ameliorate the symptoms of their disease. And if we can do anything to lessen that burden on patients, families, and the health care system—that’s what the goal of our therapies is.”

“The most exciting aspect of it is seeing how these molecules can be applied clinically, and seeing the potential for curing human disease,” Quijano says.

“Many easy problems have been solved, so the problems we’re working on now are much harder. That’s why many of them involve collaborative teams of people—often people with different kinds of expertise,” Saltzman says. So-called easy problems have their questions and answers in the same discipline, where hard problems draw both from multiple fields. “Peter [Glazer] and I have very little overlap in terms of our scientific disciplines, but as a team we could make progress on problems that neither one of us could easily do alone,” Saltzman says.

Glazer and Saltzman’s collaboration has been prolific—producing papers, patents, and partnerships—and it’s now becoming prototypical. Yale, Saltzman says, is “a sprawling university—intellectually—but a pretty compact university, and one where community is really valued. It’s big enough that there are all sorts of different people here—with all different sorts of expertise—but it’s small enough that they’re not all that hard to find.” A multidisciplinary environment is, perhaps paradoxically, where researchers such as Quijano, Ricciardi, Saltzman, and Glazer are finding their niche.

“It’s just essential for me to collaborate with people,” Saltzman says. “I couldn’t be competitive if I didn’t.”