Rally for Ukraine at Yale School of Medicine

A recording of Shche ne vmerla Ukrayiny, ni slava, ni volya, the Ukrainian national anthem, rang out across the plaza in front of 333 Cedar Street and several members of the large crowd present joined in, singing the lyrics. Yevheniia Ishchenko, a postdoctoral associate at Yale School of Medicine (YSM), had organized this March 3 gathering, to demonstrate solidarity and support for Ukraine and members of the community from Ukraine. Throughout the event, a handful of students and faculty held a large Ukrainian flag on the 333 Cedar Street staircase, as blue and yellow ribbons were given to everyone present. 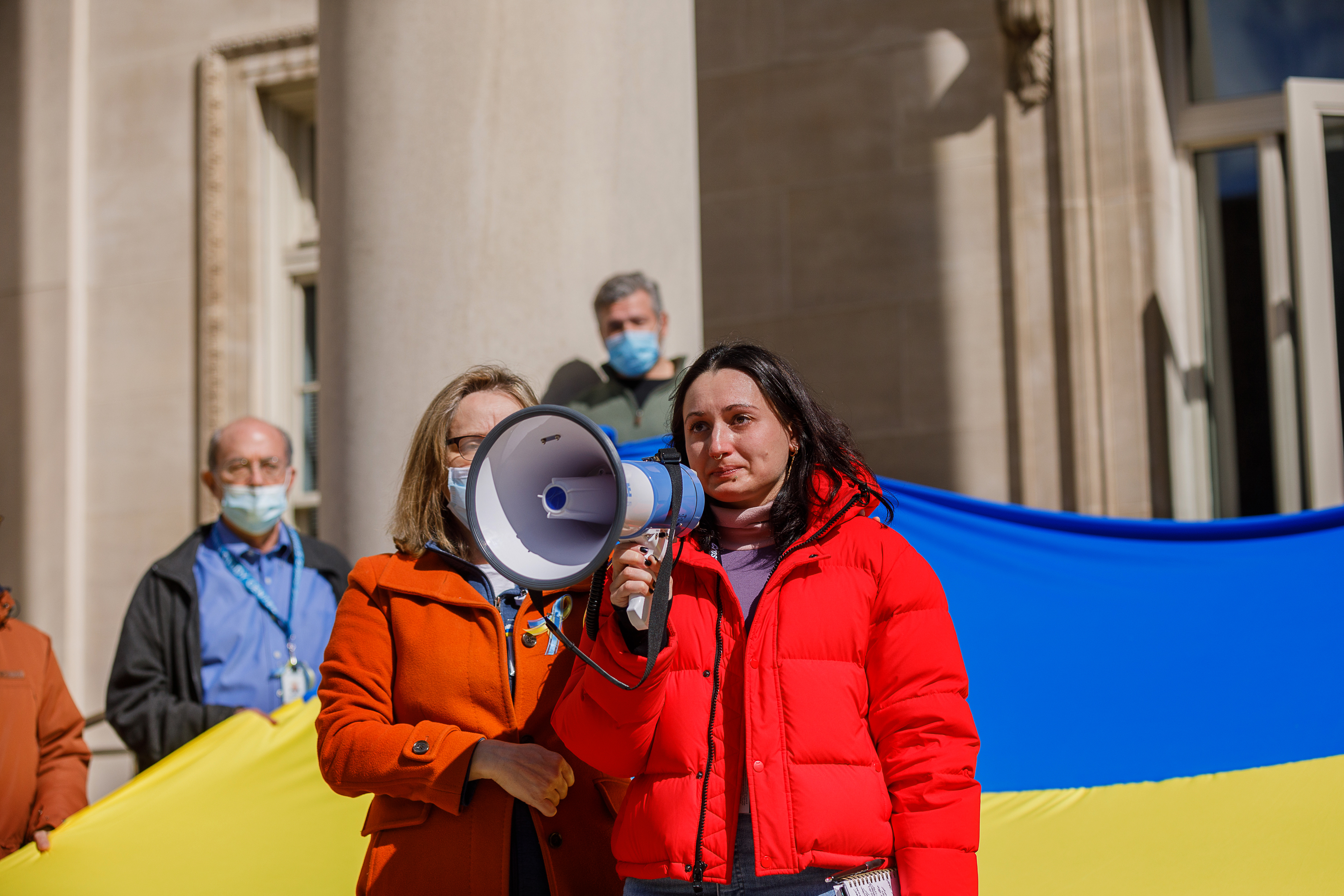 The horror of Russia’s brutal attacks, love and pride for Ukraine and family in Ukraine, conviction that Ukraine and democracy will prevail, and the need for unified action were themes that were repeated among the speakers, most of whom were Ukrainian or Ukrainian-American.

This is a war against democracy

After describing the mounting casualties, Vasyl Matsyuk, a Yale Divinity School student, said, “these numbers are dehumanizing, because behind each number there is a human life.” He emphasized there are two narratives that we must be talking about. First, the horror of what is going on, “we must lament, grieve, and be outraged, be angry, and we must channel those feelings to do all that we possibly can no matter where we find ourselves geographically.” Second, that “ultimately justice will prevail, ultimately Ukraine is going to win this war” and “we must start envisioning how we will rebuild our beautiful country.” He explained the second point is important because it reinforces the need for action from everyone. “We must do what we can,” Matsyuk stated, adding “we must struggle for the life of Ukraine because it is a struggle for the life of the world.”

Assistant Professor Alla Vash-Margita, MD, chief, Division of Pediatric and Adolescent Gynecology, Department of Obstetrics, Gynecology & Reproductive Sciences, who shared that she “grew up in the Soviet Union that collapsed as a non-sustainable totalitarian regime in 1991,” provided a historical perspective. She noted that the 1994 Budapest Memorandum, in which the United States, Russia, and Britain committed “to respect the independence and sovereignty and the existing borders of Ukraine and to refrain from the threat or use of force,” played a key role in persuading Ukraine to give up the third largest nuclear arsenal in the world. She walked those present through challenges to democracy Ukraine has faced, including the Orange Revolution in 2004 and Revolution of Dignity in 2014. Characterizing today as the final fight for freedom, she said, “the Ukrainian people are fighting for peace and justice in Europe.” 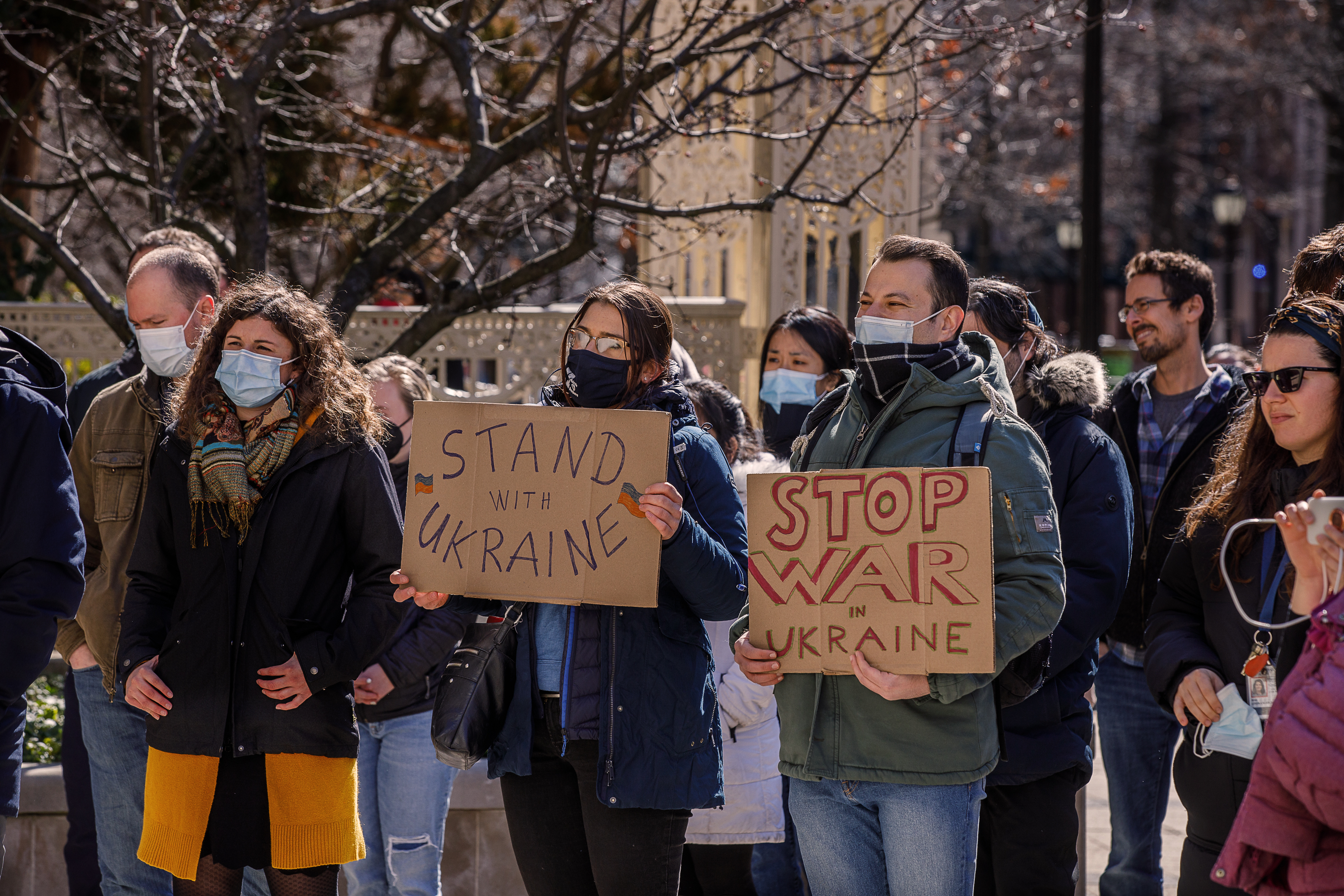 Vash-Margita shared that her family in Ukraine is not leaving, “as they are on their land in their country, the occupant troops must leave! Not Ukrainians!” She then turned to advocacy efforts, stating, “I am calling on physicians of Russia to rise and protest the war and fulfill the Oath of Hippocrates, which states ‘do no harm.’” She expressed her gratitude to everyone helping Ukraine, including Yale physicians organizing humanitarian help to the hospitals in Ukraine. “I believe that the light will win over darkness,” Vash-Margita, stated, “we all just have to do our part.”

YSM postdoctoral associate Roman Ivasiy encouraged those present to reach out to their representatives and senators and use social media to advocate closing the sky over Ukraine. “This is a war against a peaceful nation. This is a war against democracy,” he proclaimed.

Only together united we can fight aggression

Oksana Goroshchuk, also a YSM postdoctoral associate, shared she was born in 1990, the year before Ukraine became an independent country. She described how for the past week, she has awakened each day and checked for messages from her parents and friends, praying they are alive. But, she explained, she wanted to focus her remarks on everyone present. “I am a drop in the ocean. Only together united we can fight aggression. We, international citizens, citizens of the United States, must stand up together for democracy, for freedom, for life.”

Yevheniia Ishchenko spoke last at the gathering, describing how Kherson, the city where she was born and raised, had been overtaken by Russian troops two days ago with her family and thousands of civilians trapped with neither food nor a way out, as the Russian army had not allowed humanitarian help to get through. The troops also refused to open the green corridor even for dead and wounded civilians. She shared how her mother, a nurse, is home in Kherson and risks her life each day to go to the hospital to care for the wounded. “I am very proud of my mom and proud to be her daughter,” Yevheniia Ishchenko stated, but “I don’t want my family to have to be strong, to have to be brave. I just want them to be safe.”

Like those who spoke before her, Yevheniia Ishchenko expressed optimism that “if we all come together, we can stop” the Russians. She encouraged those present to “raise your voice for us” and also consider donating resources for humanitarian help for Ukraine.

After singing along to Shche ne vmerla Ukrayiny, ni slava, ni volya, Yevheniia Ishchenko closed the ceremony stating “Glory to Ukraine. Thank you for your support.”

Numerous organizations are raising money to help the people of Ukraine. Yevhennia Ischenko, one of the organizers of last Thursday’s rally, suggests supporting these:

And Timothy Snyder, the Richard C. Levin Professor of History at Yale and a longtime scholar of eastern and central European affairs, has posted this essay that includes a list:

Hospitallers working at the frontline: https://bit.ly/3tCu0G9