A Call for More COVID-19 Vaccine Funding, and Praise for Yale's Achievements

On July 24, United States Senator Richard Blumenthal (D-CT) highlighted research conducted at Yale School of Medicine as he urged his Senate colleagues to approve more federal funding for development and distribution of vaccines to halt the COVID-19 pandemic. Speaking on the school’s Harkness Lawn, Blumenthal said, “Our nation will not go back to anything like normal. We will not reopen our economy, we will not have Americans feeling safe and secure without a vaccine. It's that simple.” 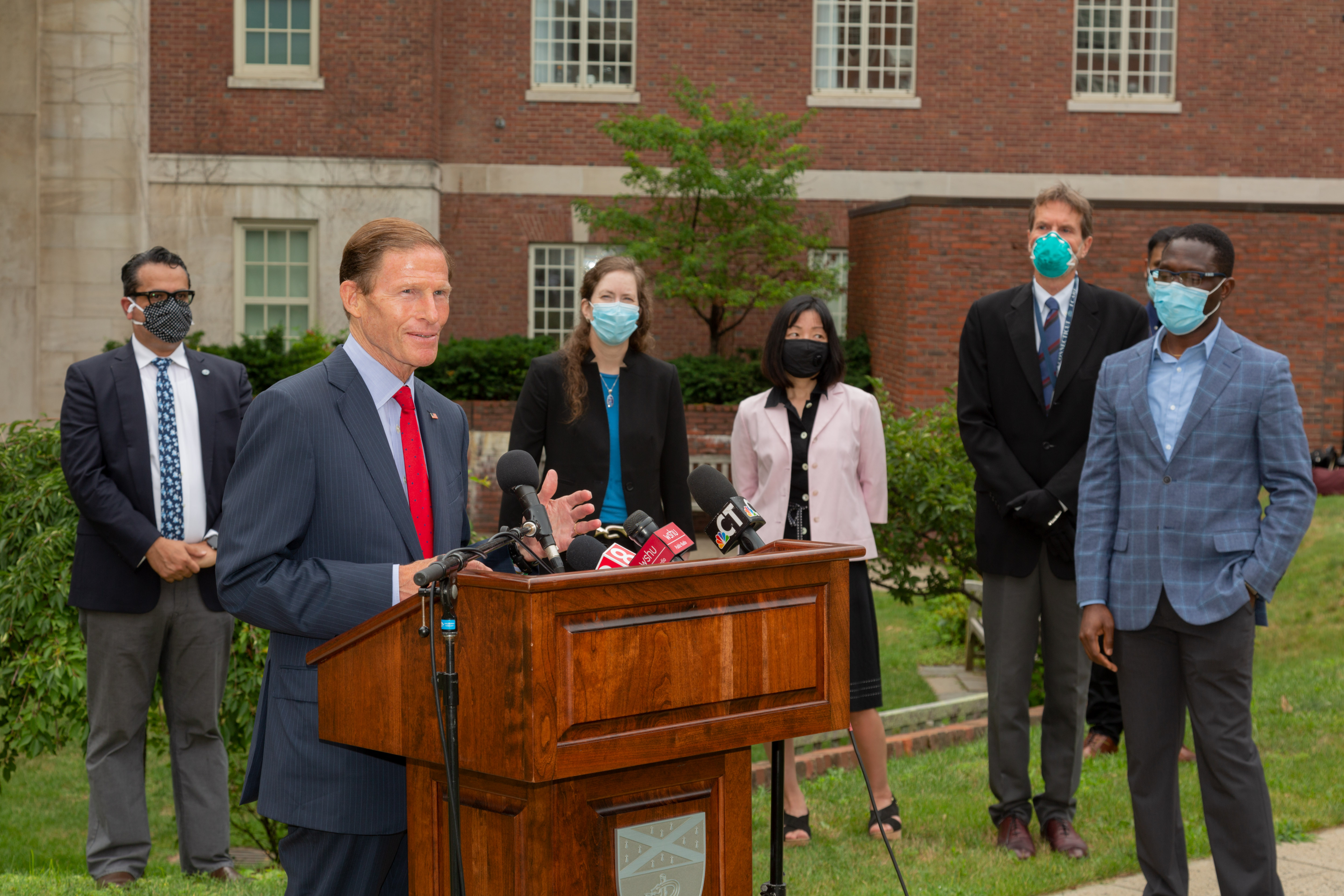 Blumenthal urged passage of a piece of COVID-19 relief legislation called the HEROES act, which, in addition to providing new relief to those hurt economically by the pandemic, would dedicate another $10 billion to moving the nation closer to having safe and effective vaccines. He also praised the science and clinical care taking place at Yale, as well as the university’s efforts to ensure that members of often-underserved communities have equal access to both the vaccine development process and the ultimate distribution of vaccines.

Nancy J. Brown, MD, the Jean and David W. Wallace Dean of the School of Medicine and C.N.H. Long Professor of Internal Medicine, welcomed Blumenthal and recounted what Yale has accomplished to battle the pandemic. Brown cited unprecedented collaboration within Yale among faculty and leaders with varied areas of expertise, and she noted its positive impact. “Since infection peaked in Connecticut,” Brown pointed out, “we have been, as you know, one of the most successful states in reducing rates of infection. I think that reflects our teamwork.” 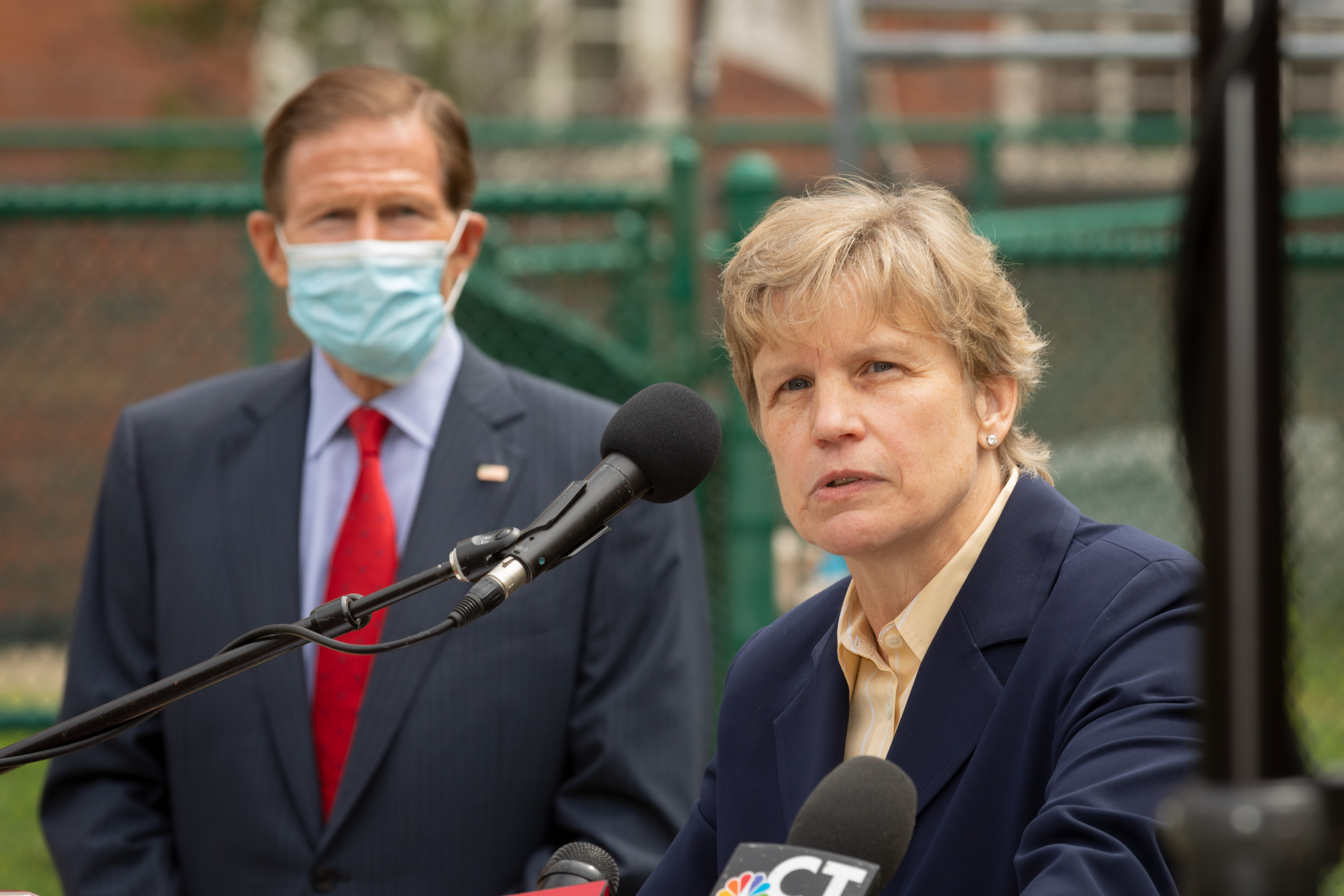 One promising scientific effort is being led by Richard Bucala, MD, PhD, Waldemar Von Zedtwitz Professor of Medicine (Rheumatology), and professor of pathology and of epidemiology (microbial diseases). When the spread of H1N1 flu reached dangerous levels in 2009, scientists began work on an anti-viral vaccine, but did not have time to perfect it before that epidemic subsided. Bucala is now picking up with COVID-19 where those and other researchers left off. The mechanism of the vaccine he is developing is based on a self-amplifying RNA, which lends itself to being reproduced on a mass scale and has previously shown promise against viruses. At the news conference, Bucala called it “a platform that can be rapidly developed and easily deployed, so that there can be many vaccinations and no [manufacturing and distribution] bottleneck.”

Simultaneously at Yale, Onyema Ogbuagu, MD, associate professor of medicine, is leading Yale’s COVID vaccine clinical trials to help determine the safety and effectiveness of another RNA vaccine, which the pharmaceutical company Pfizer plans to distribute if it gains Food and Drug Administration approval. The phase 3 study’s particular focus is how safe and effective the vaccine would be inclusive of older people and with a focus on equitable enrollment of ethnic and racial minorities. 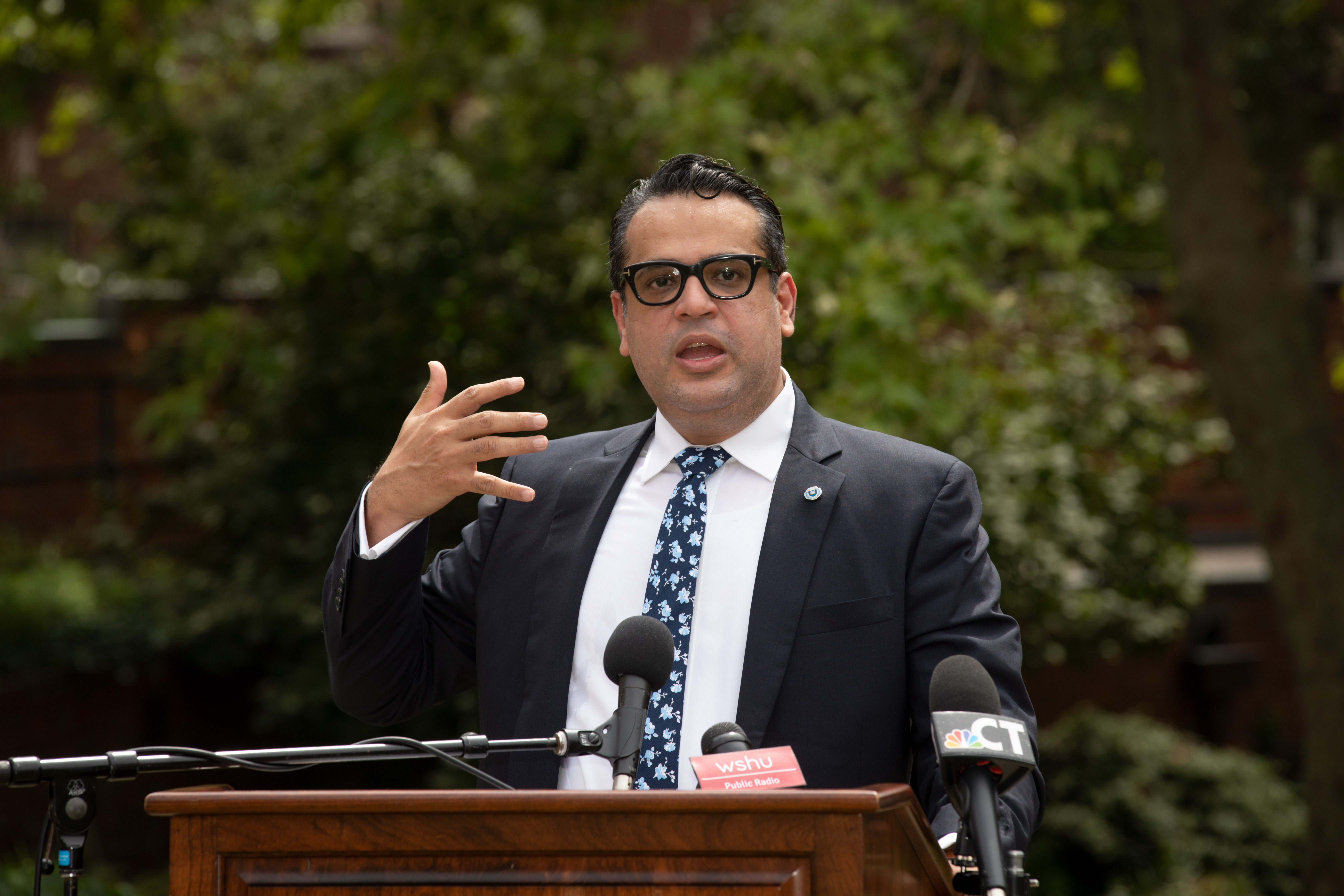 One imperative Yale has as the science progresses is to be sure that all populations have a role in evaluating vaccines, and will have equal access to approved vaccines when that time comes. Saad B. Omer, MBBS, MPH, PhD, director of the Yale Institute for Global Health, noted how “trials that are led by Yale are conducted in some of the most diverse populations in the country.” Diversity is essential, he said, to have trial results that are generalizable to the populations most impacted by this outbreak. “In the context of vaccines,” Omer explained, “some of the work at Yale, and others' work as well, has clearly elicited the differential impact of COVID-19, not just by age but by background and socioeconomic status and a disproportionate impact on the communities of color.” 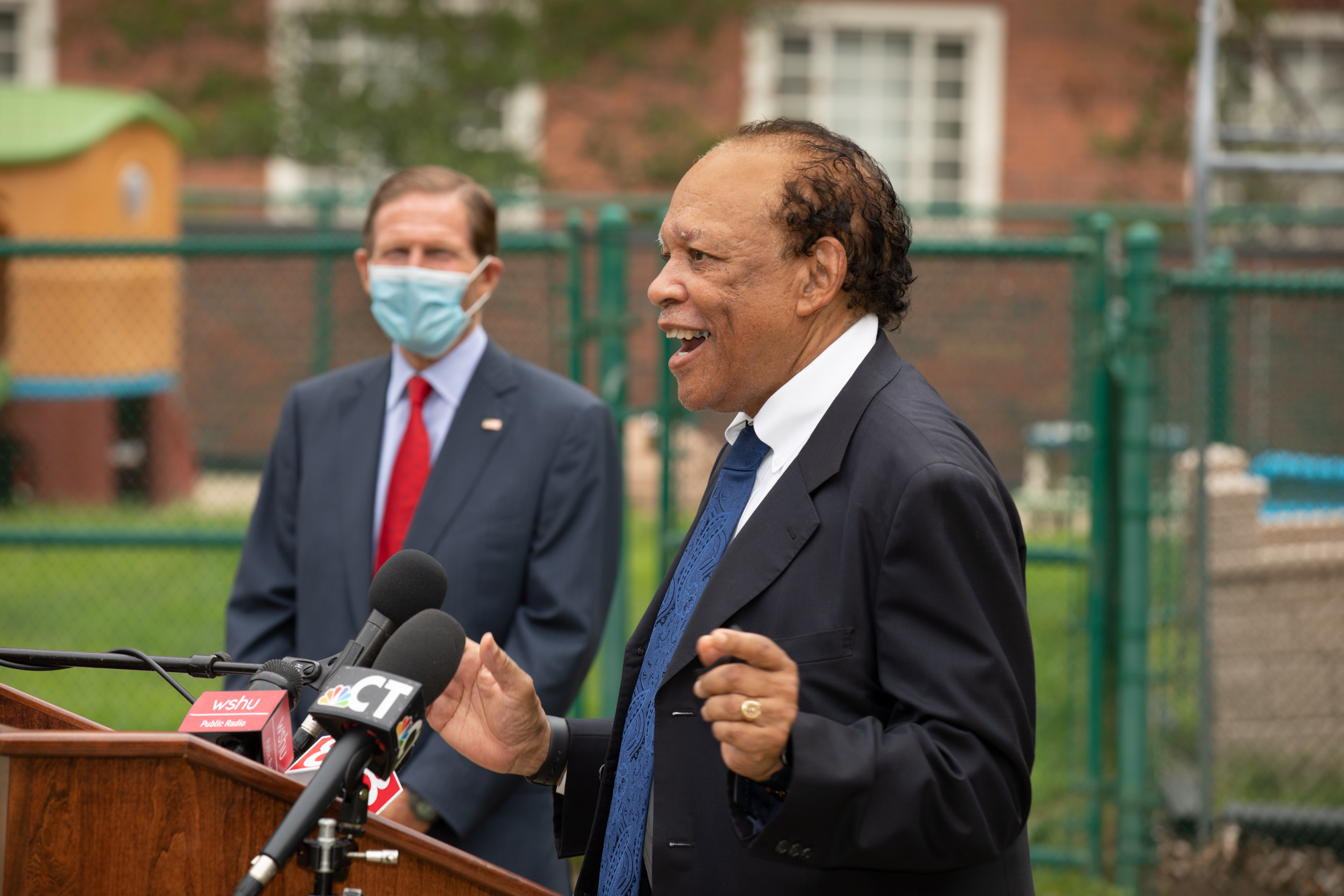 Reverend Dr. Leroy O. Perry, Jr., pastor of St. Stephens AME Zion Church in Branford, has played a primary role in connecting Yale scientists with greater New Haven’s African American community. Perry’s role as a Cultural Ambassador has included explaining to members of his community why volunteering for clinical trials will benefit them. “Nobody can tell our story for us,” Perry said. “And they need to hear from religious leaders and members of the community to just reinforce for them, without suspicion, that what we're doing is for the good of all of us, and particularly for people of color.” Over the past decade, Cultural Ambassadors have worked closely with Yale researchers, listening to and evaluating research proposals while advising Yale scientists on how best to shape their studies so they will be well-received in the community. All agreed this collaboration may never be more essential than during the COVID-19 emergency.

Also highlighted by Dean Brown at the session was the work of Akiko Iwasaki, PhD, Waldemar Von Zedtwitz Professor of Immunobiology and professor of molecular, cellular, and developmental biology, who is studying how some aspects of the body’s immune response might lessen the effects of COVID-19, while some might exacerbate them—as well as that of Ellen F. Foxman, MD, PhD, assistant professor of laboratory medicine and of immunobiology, whose efforts have included enhancing tools to diagnose COVID-19.