by Michael Strambler and Joanna Meyer

As cultural and linguistic diversity increases in the U.S., schools are faced with a growing demand for effective services that support their diverse students. Children enter school with a variety of linguistic backgrounds and a wide range of English language proficiencies. Children who are simultaneously developing skills in two languages (for example, their home language in addition to English) are often referred to as dual language learners (DLLs).[1] Although the early learning of more than one language has cognitive and social benefits for children, it also presents challenges for some students, particularly within learning environments primarily designed for English-speaking populations.[2]

Over the past two years, Partnership for Early Education Research (PEER) members have noted that their organizations struggle to find actionable information about how to address the needs of their DLL children. Practitioners find it difficult to wade through the growing body of research on the effectiveness of instructional strategies for serving DLLs[3,4,5] to identify “best practices.” In addition, researchers and practitioners agree that new programs and strategies cannot be implemented effectively without considering the teacher, student, and family characteristics of specific settings. Member organizations’ interest in supporting DLL children and families led to this topic’s prominence in PEER’s long-term research agenda.

In November, the Spencer Foundation awarded PEER a grant through the foundation’s Research-Practice Partnership Program, which will fund a three-year project focused on supporting DLLs in early childhood, specifically across the preschool to elementary school transition. The project will include:

As an initial step in launching this project, PEER sought to better understand the characteristics of DLLs in Connecticut through acquiring and graphing national data from the Stanford Education Data Archive (SEDA).[6] To see an interactive version of the graph below, click here. This visualization depicts the correlation between average family socioeconomic status and average academic achievement for all school districts in Connecticut, with larger circles indicating districts with greater student enrollments. This figure also illustrates the composition of DLLs within districts, with darker circles representing districts with higher percentages of DLLs. This visualization shows that DLLs are mostly concentrated in large, lower performing school districts located in poor communities. The graph also highlights a disparity in academic performance between DLLs and their non-DLL counterparts. Because a great deal of research indicates that such disparities often emerge at or before school entry and persist over time,[7] PEER is thankful to the Spencer Foundation for its support of PEER’s work to identify how these disparities arise during early childhood. 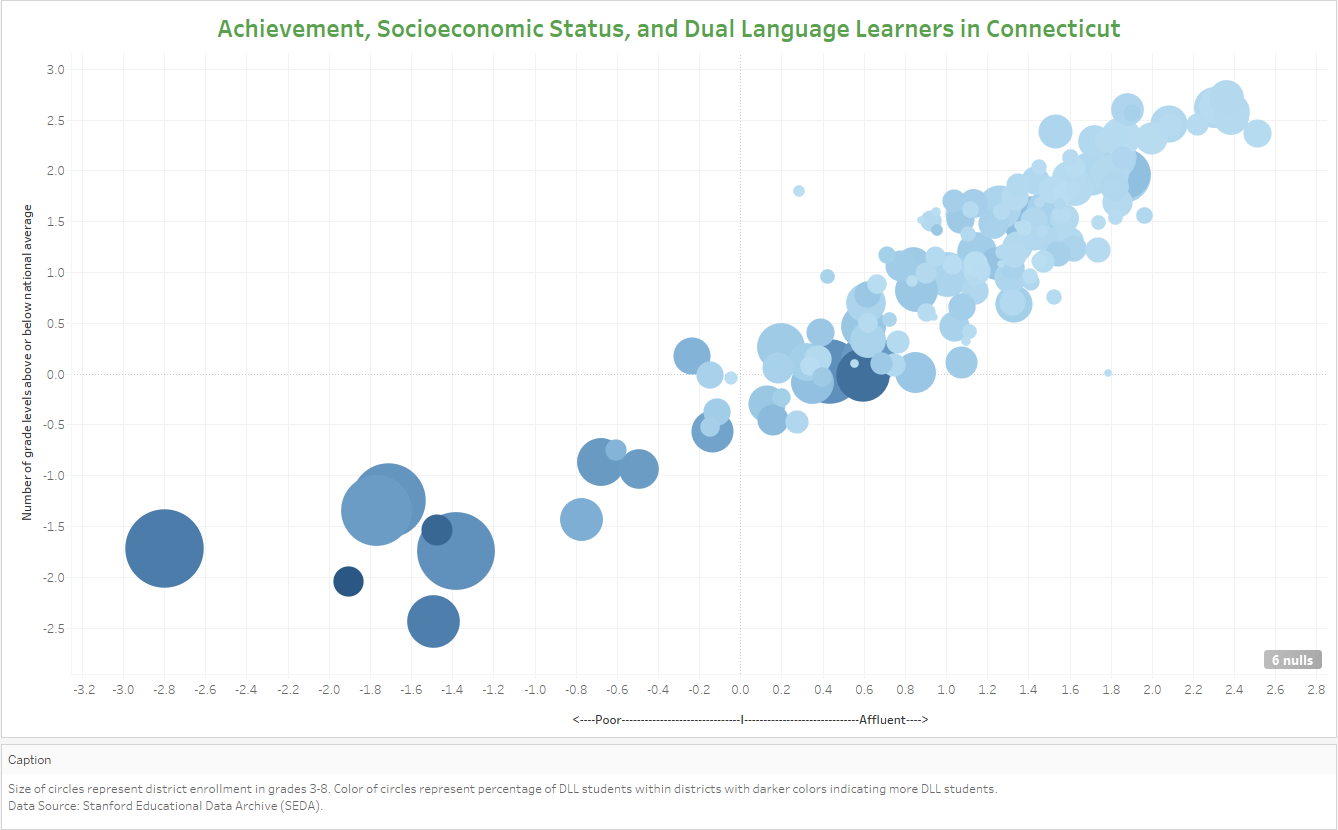 The Partnership for Early Education Research (PEER) was created in 2014 to develop the capacity and infrastructure for researchers and practitioners to work together towards improving practices and policy that impact early learners in Connecticut, including the state’s growing population of DLLs. Led by co-directors Michael J. Strambler, Ph.D. and Clare W. Irwin, Ph.D., PEER is a partnership between Yale School of Medicine, Cooperative Educational Services (C.E.S.) and Education Development Center, Inc. (EDC), in collaboration with the Connecticut State Department of Education, Connecticut Office of Early Childhood, and the communities of Bridgeport, Norwalk and Stamford. Because PEER is guided by the belief that early childhood education research should be both rigorous and relevant to local communities, collaboration with community stakeholders is key to the partnership’s success. PEER aims to facilitate research that addresses the needs and interests of diverse stakeholders across Connecticut by engaging early childhood education administrators, classroom-based practitioners, policymakers, advocates and researchers. Dr. Strambler and George Coleman of C.E.S. are co-principal investigators for the Spencer Foundation project.