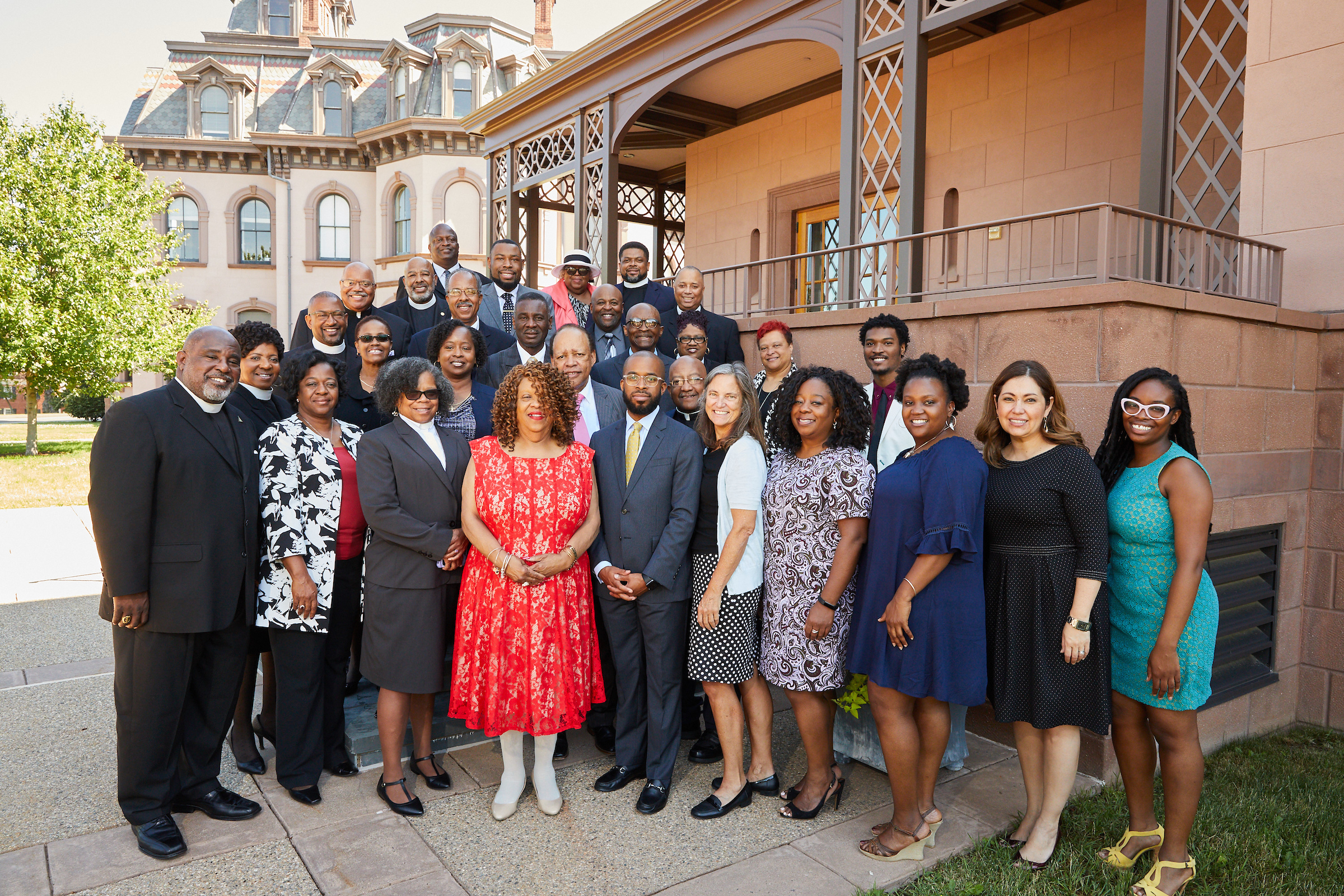 Rev. Daran Mitchell, DMin, is committed to improving the health of his parishioners in Greensboro, N.C. He oversees a congregational nurses program and is concerned about health care equity in the African American community. Until recently, however, Mitchell, pastor of the Trinity African Methodist Episcopal Zion Church, knew little about clinical research. “What I knew were negative things that happened within the Tuskegee experiment,” he said.

Mitchell’s perception of clinical research is not uncommon and plays a role in the underrepresentation of African Americans in clinical research. But his attitude has changed as a result of his participation in the Cultural Ambassadors program, a newly established collaboration between the Yale Center for Clinical Investigation (YCCI) and Duke University’s Clinical & Translational Science Institute.

In 2011, YCCI established the Cultural Ambassadors program to ensure that clinical trial participation reflects the diversity of New Haven’s population, which is 34 percent African American and more than 28 percent Hispanic. YCCI partnered with Junta for Progressive Action and the African Methodist Episcopal Zion (AME Zion) Church to create the program. By providing intensive training on such topics as the importance of clinical research, how it is conducted, and protections for human subjects, the program enables Cultural Ambassadors to engage with community members with the goal of increasing the participation of the Hispanic and African American communities in clinical trials. Cultural Ambassadors also act as expert resources, advising Yale investigators on how best to engage their communities in clinical research. The idea is that more effective interventions can be developed if clinical trials reflect the diversity of those affected by the conditions being studied.

In New Haven, the Cultural Ambassadors program has had an impact, helping to shift the negative perception of clinical research and increase minority participation. Over the past two years, every study in which Cultural Ambassadors have been engaged has had at least 12 percent minority participation, with an average ranging between 22 and 89 percent. More than 6,000 minority group members have expressed interest in research studies and minority enrollment in a variety of studies has increased. Direct-to-patient recruitment efforts via Yale’s electronic health record system and other outreach initiatives to promote diversity participation have also contributed to that number.

Yale is building upon this success by expanding the program to Duke. Both institutions are recipients of the National Institutes of Health Clinical and Translational Science Award (CTSA), which is designed to accelerate the translation of scientific discoveries into practice to improve health. In conjunction with YCCI, Yale Cultural Ambassadors have been working with Duke and AME Zion representatives to implement the program in North Carolina. 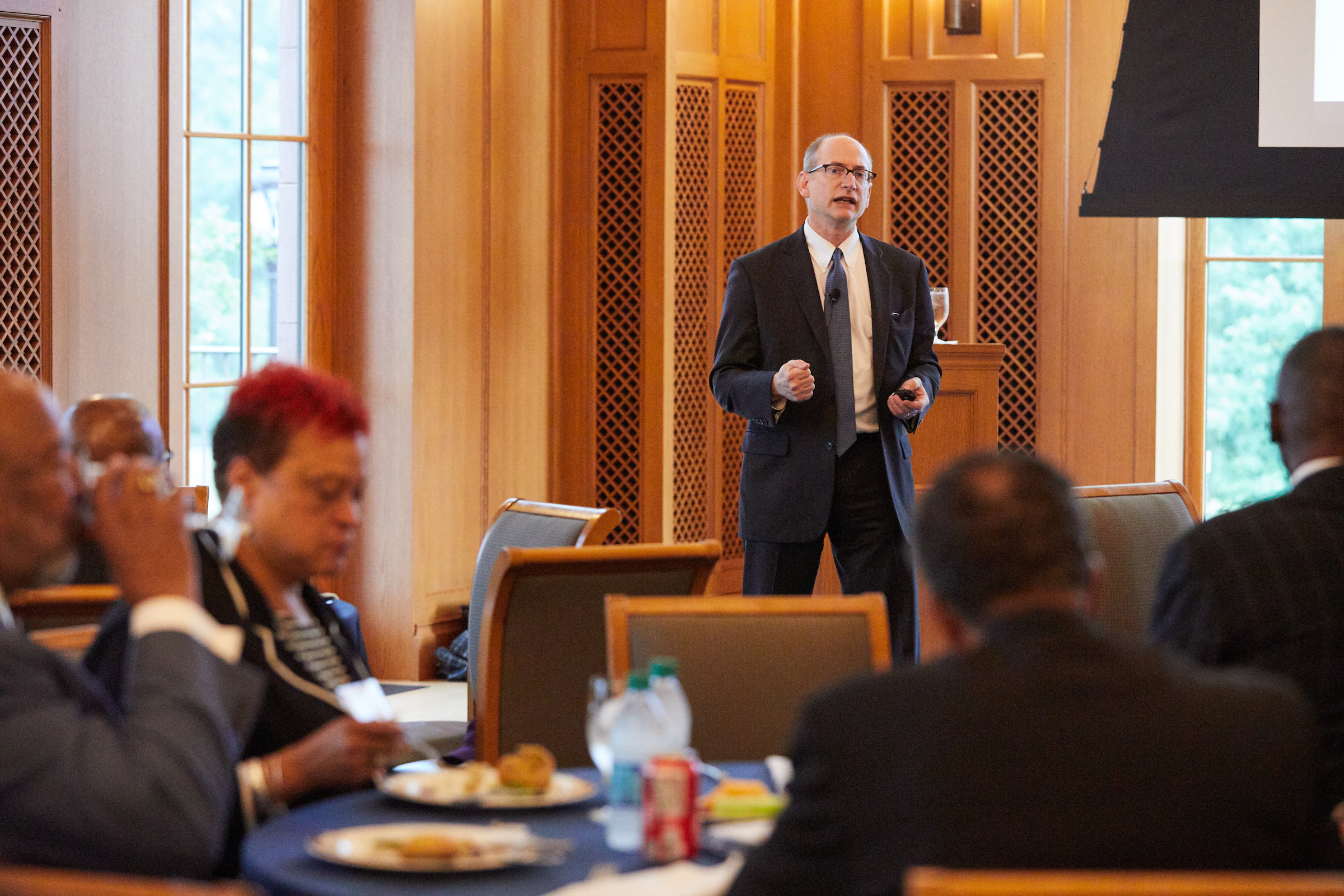 On June 28 and 29, 23 Duke Cultural Ambassadors joined about 20 Yale Cultural Ambassadors at Yale’s Maurice R. Greenberg Conference Center to experience firsthand how the program works. John H. Krystal, MD, chair of the department of psychiatry, met with the group to discuss clinical studies on depression, addressing the stigma of mental health conditions in the African American community. The group also met with Eric J. Velazquez, MD, Yale’s newly recruited chief of cardiovascular medicine, who arrived from Duke this spring.

Velazquez explained his work on the TRANSFORM-HF study, which looks at the effects of diuretics on heart failure outcomes. This five-year study funded by the National Heart, Lung, and Blood Institute (NHLBI) will enroll 6,000 patients at 50 centers. “The Duke Cultural Ambassadors coming to Yale was a terrific opportunity,” said Velazquez. “They asked me to speak about heart failure, the role of research in changing care, how little is known about acute heart failure and the opportunity to change the pattern of care, and how difficult it is to meet recruitment goals.”

African American participation is particularly important to TRANSFORM, since heart failure is more prevalent in this population than in other groups. Within the past year, about 26 percent of patients presenting with acute heart failure to the emergency department at Yale New Haven Hospital self-identified as Black or African American. Velazquez asked the Cultural Ambassadors for input on mechanisms to ensure that the study operations and delivery of information are organized in a way that will communicate the impact of acute heart failure on the health of African Americans. “Not only do we want to transform heart failure care, we want to transform how we study elements of that care more efficiently and quickly so we can get actionable results faster,” he said.

Through his participation on Duke’s five-person advisory board on clinical research, Rev. Mitchell had become aware of “the absolute necessity for people of color to engage in clinical trials so as to preserve or have quality of life.” At the June meeting, he learned about the intricacies of clinical trials, as well as how very few people in his community are engaged in those trials. “The issue of health equity really rings in my head and in my heart with regard to people of color,” he said.

The meeting at Yale was the final piece in the training needed by the Duke Cultural Ambassadors to implement the program. Mitchell said he feels prepared to discuss clinical research with his parishioners and in the broader community. “It’s a wonderful collaboration between the faith community and two of the more prominent institutions of higher learning in the country,” he said. “We’re excited about the possibilities for making health care and health equity a part of our agenda, but more important, making sure that clinical trials help to sustain life for our people and our communities.”

At Yale, Velazquez found the Cultural Ambassadors to be knowledgeable about good clinical research practice, the barriers to participation in clinical research, and the cultural history at play. “The idea of these groups teaching each other about the importance of this mechanism and using the heart failure study as a way to engage around strategies to boost recruitment and improve patient outcomes—as well as help communities learn more about clinical trials—is powerful,” he said. Since the study sites are scattered across the country, mostly in academic medical centers, he sees the possibility of using the Cultural Ambassadors program as a model for a study-wide approach to increase the enrollment of African Americans. “They had fantastic ideas,” he said. “It’s an important mechanism to get information into the communities we serve. One of the ways we can serve these communities is by building access to innovative care models.”