The average human brain is the most complicated structure on Earth. Weighing in at three pounds, this amazing organ controls all of the body’s functions, manages interactions with the outside world, stores and retrieves memories, designs skyscrapers and spaceships, directs dreams, drives creative pursuits, and forges our personalities.

These organic computers contain about 100 billion individual cells, a little more than a quarter of a percent of the 37 trillion cells estimated to comprise the basic building blocks of the human body. Scientists are still just beginning to understand how the variety of cellular structures work and interact in the tightly packed, interconnected landscape of the human brain.

For researchers seeking precise causes of impairment from Alzheimer’s disease and other dementias, the brain’s intricacy and the diversity of the molecular underpinnings of these diseases have made it difficult to devise prevention strategies and treatments.

How to unpack such complexity? One promising answer, thanks to the latest technology and analytical techniques: start simple.

“We know so little about how Alzheimer’s disease develops,” said Dr. Le Zhang, a faculty member in charge of single-cell experimental design and data analysis at Yale School of Medicine’s Department of Neurology. “In order to understand what is happening to people with such a complex disease, we need to start at the cellular level. That must include looking at sex-specific differences that exist in single cells of women and men.”

In a major step toward this crucial understanding, Women’s Health Research at Yale is now collaborating with Dr. Zhang and Dr. Stephen Strittmatter, Director of the Yale Alzheimer’s Disease Research Center (ADRC), to uncover, for the first time, sex-specific differences in the origins of Alzheimer’s disease by studying single cells.

“By understanding the subtle differences among cell populations in Alzheimer’s disease, we can build upon our knowledge of abnormalities that cause cell death and how they relate to disease symptoms such as cognitive dysfunction,” said Dr. Strittmatter, the Vincent Coates Professor of Neurology and Professor of Neuroscience. “Such knowledge has the potential to identify hidden biological clues and produce novel therapeutic targets that will benefit women and men suffering from or at risk for developing this destructive disease.”

What Is Alzheimer’s Disease?

The fundamental units of the nervous system, including the brain and the spinal cord, are called nerve cells or neurons. With a few exceptions, these cells, which communicate electrically with other cells, do not normally reproduce and replace themselves like other cells in the body can. When neurons become damaged or die at accelerating rates, this is called neurodegeneration. 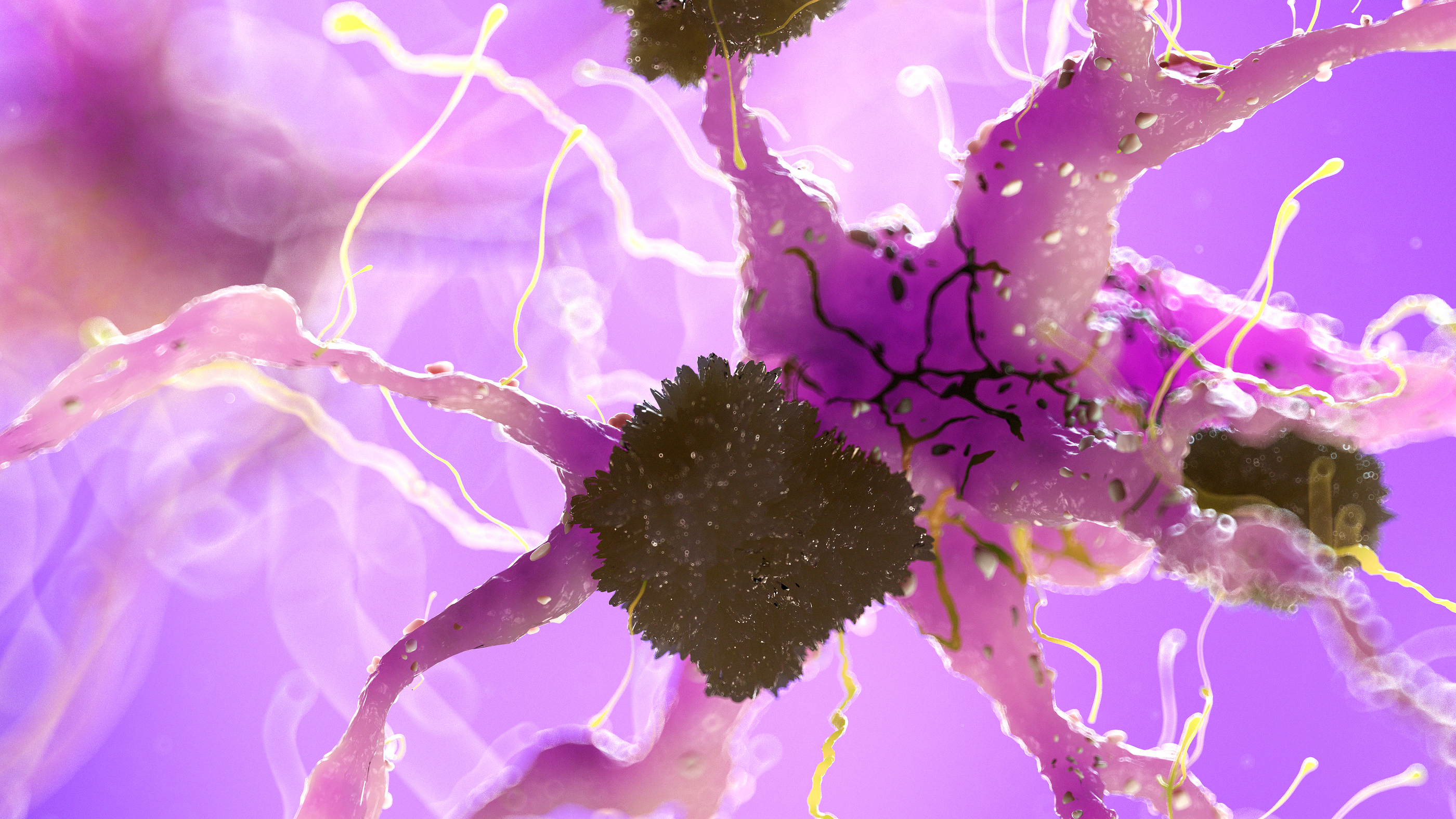 Alzheimer’s disease (AD) is the most common neurodegenerative disease, and there is currently no effective treatment. Symptoms include progressive memory loss and cognitive dysfunction, with significant impact on daily functioning for those struggling with the disease and on the lives of their caregivers.

More than 5.5 million people in the United States have Alzheimer’s disease, two-thirds of whom are women. In addition, women have a much higher risk for developing the disease, attributable to more than an average life expectancy longer than men. One in five women ages 65 and older are at risk, compared to one in 11 men. Women with AD also have more severe cognitive symptoms and neurodegeneration.

Alzheimer’s disease occurs when several cellular processes break down. For instance, accumulations of specific proteins, known as amyloid-beta plaques, around nerve cells can decrease their ability to communicate with each other and effectively relay messages within the brain. Cells of people with AD also experience a disruption in their ability to transport nutrients due to the formation of disease structures known as tangles. Furthermore, individuals with AD may suffer from inflammation in the nervous system. Researchers are exploring how plaques, tangles, and inflammation relate to one another and cause disease.

What has made Alzheimer’s disease especially difficult to treat is that it involves many types of cells, including neurons, cells that insulate neurons called glial cells, and disease-fighting immune cells. Not only do malfunctions in each of these cell types contribute to the disease on their own, these cell types also interact with each other, further complicating our understanding of disease development.

It is also currently unclear how the cellular mechanisms underlying Alzheimer’s disease contribute differently to symptoms in women and men. Thus, a precise understanding of how single cells of varying types function in healthy and disease states in women and men has the potential to open doors for sex-specific treatment of AD.

In partnership with WHRY and with support from The Werth Family Foundation, Drs. Zhang and Strittmatter are using single-cell analysis to uncover sex-specific molecular pathways in Alzheimer’s disease, focusing on abnormalities and inflammation of the central nervous system.

In a previous study, Drs. Zhang and Strittmatter demonstrated they can successfully use single-cell analysis to profile brains from individuals with and without Alzheimer’s disease. Their preliminary data indicate that people with AD have more of a type of glial cell involved in immune responses in a region of the brain strongly affected by AD called the middle temporal gyrus.

The researchers are now building upon and expanding this work to discover how subpopulations of neuronal, glial, and immune cell types contribute differently to Alzheimer’s disease based on sex.

“There must be a reason why Alzheimer’s disease is more severe in women and why women are at such greater risk,” Zhang said. “What is happening on a cellular level? What are the different molecular pathways leading to disease? These are the types of questions we are asking and answering.”

By studying the individual brain cells of subjects with and without Alzheimer’s disease, the researchers will be able to identify sex-specific cell populations and signaling pathways altered during the development of AD. These results will form the basis for future studies to target these cells and try to help women and men avoid or slow the disease’s progression.

In addition, Drs. Zhang and Strittmatter will study the cells in the cerebrospinal fluid (CSF) of patients with AD to identify potential genetic shifts in the immune system between the sexes and aid in disease diagnosis and monitoring. This will provide the first full accounting of all the genetic activity at the single-cell level across the central nervous system in Alzheimer’s disease, potentially shedding light on why women experience more severe symptoms and helping to develop sex-specific targets for treatment.

Only recently have such efforts begun to focus on the impact of specific diseases, Zhang said. She and her colleagues will share their data openly, generating the first cellular roadmap for a key region of the human brain suffering from Alzheimer’s disease. And they will be able to provide this model and single-cell technological support for other researchers working on other aspects of biology and disease.

“In order to help people, we must first understand what we are and what happens to us at the most basic level,” Zhang said. “That starts with our cells.”

Cell – The most basic unit of biological life. Some organisms, like bacteria, only exist as a single cell, and yet they contain all the information and processes necessary to live. It is estimated that the human body contains more than 37 trillion cells.

Neuron – A nerve cell. Neurons transmit messages to other cells, a process which is slowed or disrupted in Alzheimer’s disease.

Amyloid-beta plaque – An abnormal accumulation of proteins around nerve cells, which impairs their functioning. Plaques are frequently observed in Alzheimer’s disease.

Tangle – Abnormal twisting of protein structures inside brain cells, which slows down transportation of key nutrients. Tangles are frequently observed in Alzheimer’s disease.

Immune cell – A cell which fights off infections and foreign materials.