Bringing Laboratory Research to the People

Researchers in Dr. Martin Kriegel’s laboratory grasp petri dishes through rubber sleeves and gloves extending into heated and sealed work spaces, a prime environment for growing some of the tiniest, earliest forms of life on earth. From a single cell, these samples can grow into colonies containing millions of bacteria.

And that’s biomedical science: Thinking about a big impact from the smallest of things over long timespans. Reaching beyond a simple understanding of the properties and behaviors of life and its often microscopic components. Seeking ways to translate that knowledge into interventions potentially benefitting millions of people.

“The next step is to bring this work to humans,” Kriegel said. “It’s a natural progression from what I’ve done so far.” Kriegel’s most promising current avenue of inquiry began in 2013 with a seed grant from Women’s Health Research at Yale and an educated hunch about the outsized role played by one

of the tiny organisms that live in our bodies and make up what is called the microbiome. Kriegel demonstrated how one of the beneficial bacteria that live in our gut might trick the body into developing antiphospholipid syndrome (APS), an autoimmune reaction more common in women.

“This was a big idea project,” said Dr. Bill Ruff, then a graduate student working in Kriegel’s lab. “The idea that bacteria living within us can trigger an autoimmune attack was not something that was mainstream. At least not in 2012 and 2013.”

While maintaining his research relationship with Yale as an Assistant Professor Adjunct, Kriegel has worked since last summer for Roche, the Swiss international health care company. Along with Yale students and colleagues, he remains committed to delivering the fruits of his WHRY-funded laboratory work to benefit patients.

A Body at War with Itself

Autoimmune disease occurs when our body’s natural defenses against foreign invaders such as disease-causing viruses and bacteria are tricked into attacking the body’s own cells. In APS, such a response can create life-threatening blood clots that might travel to the lung and cause strokes and heart attacks.

Autoimmune diseases such as APS, lupus, and rheumatoid arthritis affect 23.5 million Americans. Of those affected, 75 percent are women.

Theories for why women suffer in such higher numbers from these often similar diseases include genetic factors tied to the female X chromosome, the effect of female sex hormones, and environmental influences. One or more of these factors may trigger heightened immune responses to foreign substances, known as antigens, compared to those in men. The reproductive capacity of women must both recognize what cells are self-produced and which come from outside the body, yet allow what is fundamentally outside tissue to grow and thrive into offspring.

“Evolutionarily, it is likely related to the fact that women during childbearing ages need to protect their fetuses from infectious agents but at the same time need to regulate their responses against the fetus since half of the antigens in the fetus come from the father,” Kriegel said. “So there is a delicate balance of heightened and regulated immune responses women have to deal with that can easily go awry, even if they are not pregnant.”

Kriegel’s WHRY-funded study confirmed the identity of a gut bacterium called R. intestinalis, which contains bits and pieces similar to a body’s natural protein and, through a process called cross-reactivity, can be mistakenly targeted by disease-fighting immune cells in people with APS.

Kriegel’s team was able to establish evidence both in a culture dish and with human samples that for APS patients, the protein imitators within R. intestinalis confuse microbe-targeting immune cells called lymphocytes into attacking the body’s own cells.

Since the group’s first findings, they have obtained larger federal grants, shared their data at scientific meetings, prepared peer-reviewed articles for publication, and seen others follow their lead.

“Researchers are now exploring how cross-reactivity might influence the development of lupus and other autoimmune diseases,” Ruff said. “Once you get the ball rolling, it moves pretty quickly.”

Ruff extolled the importance of the early funding from WHRY to kickstart the work.

“It’s huge,” Ruff said. “To get the bigger awards, you need some existing data. There are only a handful of places you can get that kind of funding.”

And it’s not just the funding, Ruff said, but the freedom to follow multiple avenues of research.

“Researchers are always testing hypotheses,” he said. “You might have five questions worth answering, and a grant agency wants you to work on one. Pilot money allows you to do quick, relatively inexpensive tests and create a basic nucleus of information out of which a more complex crystal of knowledge can grow. Pilot awards like those offered by WHRY are a vital tool for exploring scientific curiosity.”

From Trigger to Treatment

As Kriegel shares time between Roche and Yale, this exploration continues to progress. He remains in regular contact with his team via Skype and is working to transition their work to other colleagues. At Roche, he is focused on developing clinical trials that test the ability of his laboratory work to safely and successfully treat patients.

“Working in the private sector is different than at a university,” Kriegel said. “But for me, the goal is the same. It’s about improving patients’ lives.”

Kriegel sees the next steps in his research on the microbiome possibly targeting specific bacteria, like R. intestinalis and others, that while generally beneficial to maintain the body’s immune, digestive, and hormonal balance could trigger an autoimmune response.

“Prevention is always best,” Kriegel said. “I can envision a treatment removing the culprit bacterium from the microbiome before people become sick.” 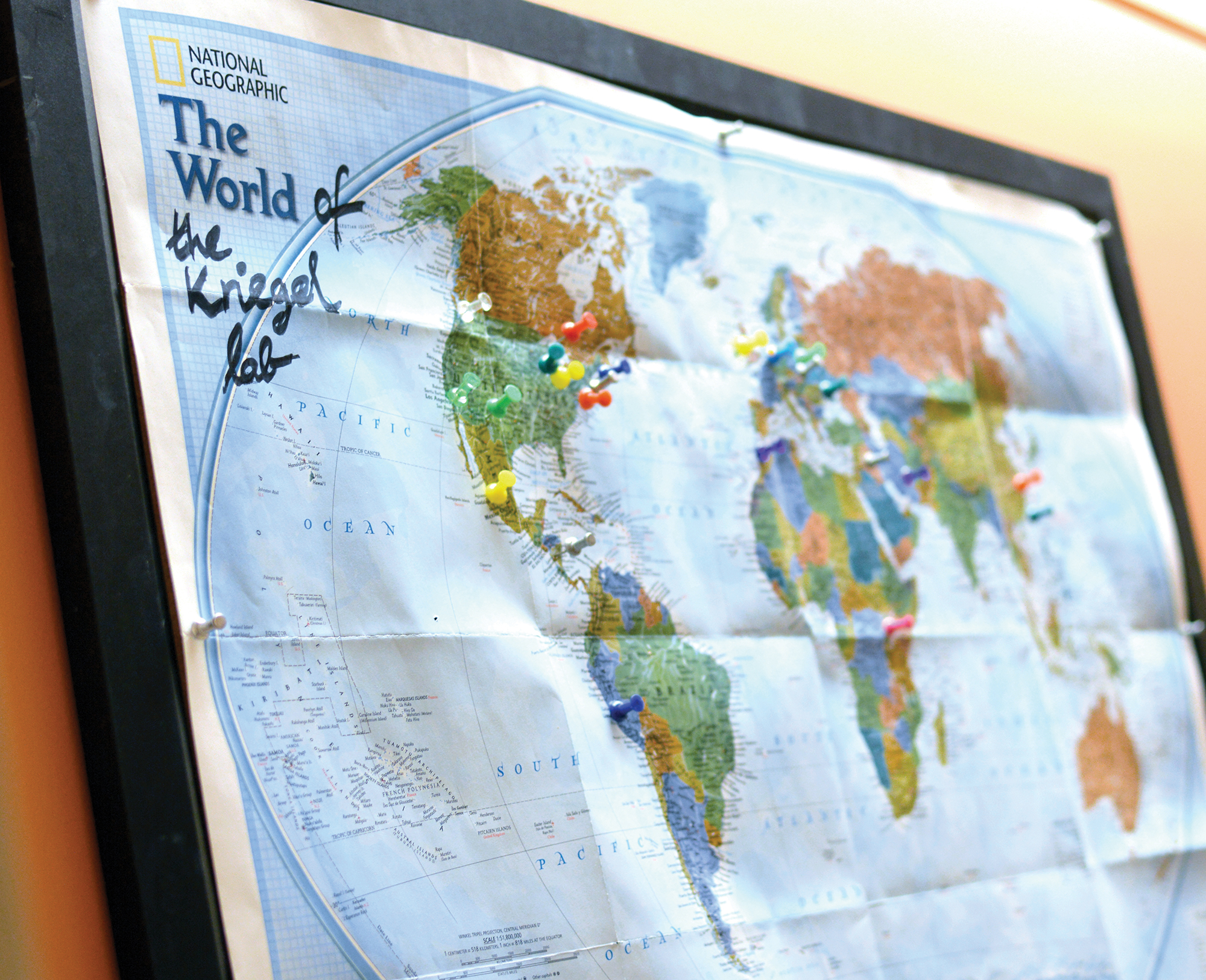 If the disease-causing bacteria can’t easily be eliminated or if its role in promoting health is too important, Ruff suggested researchers might find a way to induce tolerance for specific bacteria without the negative effects, in the same way parents now slowly introduce their babies to peanuts to avoid developing allergies.

“Foreign substances introduced to the gut could allow the body to see certain bacteria as non-harmful,” Ruff said. “This is kind of the tip of the iceberg. Every new experiment helps to decide what to investigate next.”

“It’s hard to aim at a target you can’t see,” Ruff said. “But now, by just being able to see the target, we can take better aim at it.”

Microbiome: the collection of microscopic organisms, such as bacteria, fungi, and viruses, that live in or on a host organism and impact many aspects of human and environmental health. Microbiome can also refer to the combined genetic material of such organisms. In humans, components of the microbiome play roles in the absorption of nutrients and fighting disease.