'Meet Our Speakers!' Dr. James E. Ferrell (MD and PhD) on his symphony in science 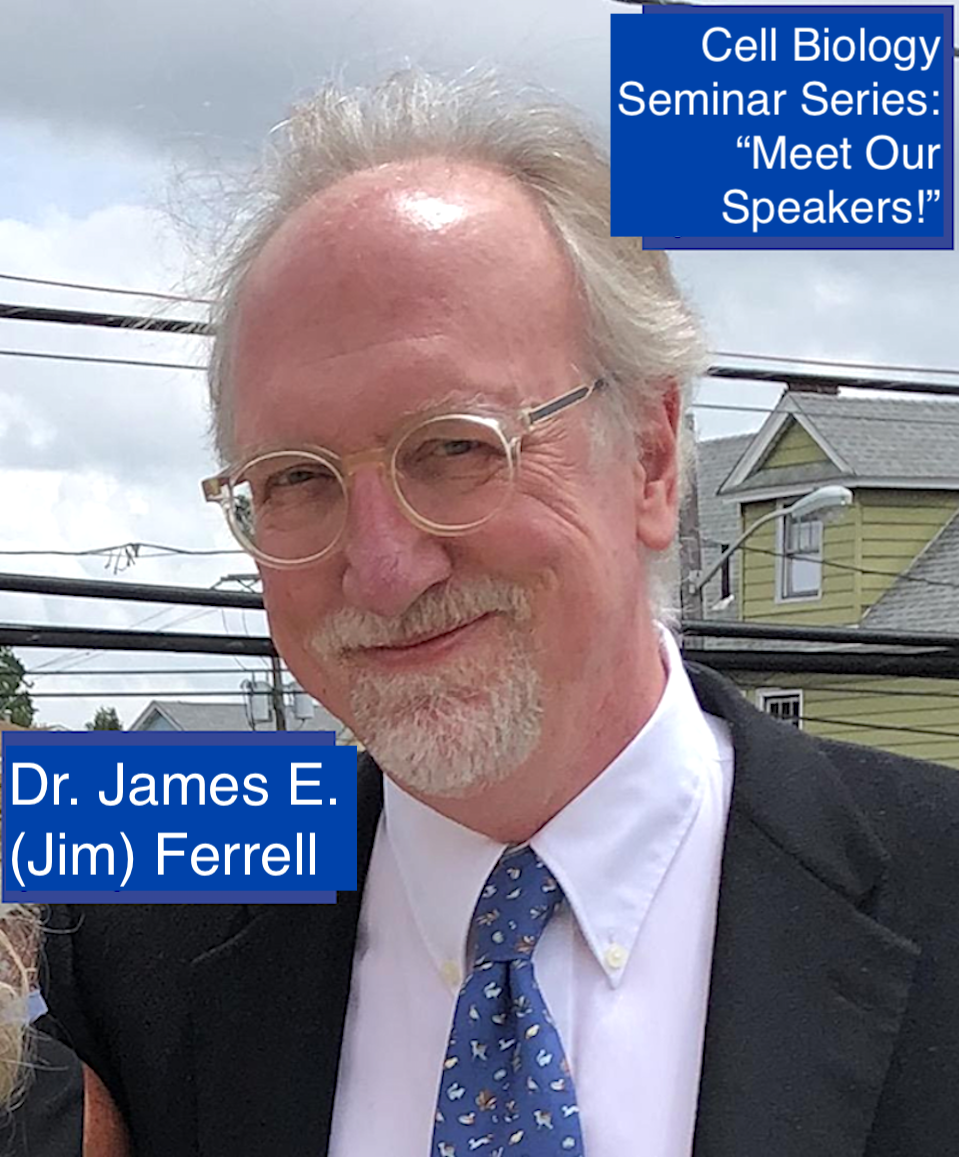 Last month, James (Jim) Ferrell was invited by Dr. Min Wu to honor us with a great talk titled:“‘Cytoplasmic self-organization in Xenopus egg extracts’” during our Cell Biology Seminar series. His lab has been “focusing [on] how biological systems organize themselves in space [for the last year]”.

In our seminar, he presented two examples of this broad research topic: “first was […] experimental work showing that if you homogenize cytoplasm, it puts itself back into what looks a lot like a sheet of cells.” A study he published in Science.

“The second part was a combination of theory and experimental work on C. elegans colony formation.”, Jim Ferrell remembered in a very humble expression for the mind-blowing creation of an abstract framework and simplification of the complex phase separation process. “It wasn’t my idea actually”, Jim Ferrell notes and acknowledges Yuping Chen, a postdoctoral researcher in his lab as “the one who blew your mind!”. After Jim Ferrell thought of ‘a simple theoretical way of understanding phase separation’ and ‘ran it by the lab’, his postdoc described “an observation he made during his graduate student rotation time in a C.elegans lab”. The two worked the idea into a hypothesis and finally forged the results of experiments into the “outrageous idea”, that describes “C.elegans colony formation [to possibly be] equivalent to a phase separation process, with the dispersed worms being like a gas phase and the worms in colonies being like a liquid phase”. The Ferrell lab demonstrated a prime example of how science is developed in a collaborative lab. They count “ seven people plus a rotation student”, who “come from a lot of different backgrounds and have gone on to do a lot of different things”. This diversity and variety of backgrounds clearly adds to the successful combination of different points of view to ideas, ultimately yielding in new scientific concepts.

Jim Ferrell had no knowledge of biology until he finished his undergraduate studies, which involved “ a fair amount of physics, chemistry and math”. He began to “get the (correct) idea that biologists work on exceptionally interesting stuff” by “talking with biology-oriented friends”. Despite his interest, he applied for medical school instead, but opted for a “research-oriented MD PhD degree” and enjoyed both “the research and the patient care”. Ultimately, he had to decide to “focus on one or the other '', because of “how demanding each of those [...] were”. Taking the path of a research postdoc rather than a residency set his path as a scientist “which [he] knew from an early age that he wanted to be”. Not only was science interesting for the young Jim Ferrell, but also music. As a kid he took “some lessons on piano and trumpet” and played the guitar “devoted but untutored” since junior high. Eventually he “resigned [himself] to the idea that [he] would probably never play in a band again” as he was “entering a more grown-up phase”.

Luckily, even in busier stages of life, when he “went to med school, or became a father, or got a faculty job”, Jim Ferrell “always ended up playing [in a band]”. “I am glad for it”, Dr. Ferrell, expressed his passion for music - a steady pillar of happiness throughout his life.

In Jim Ferrell's iBiology lecture interview, he shared his story about the struggles in his 2nd year of the degree: all premises founding basics for his PhD were wrong. Working “aimlessly”, being puzzled over “how to approach the questions he was interested in” for his PhD studies, Jim Ferrell was “rather depressed” especially when his personal life was frustrating as he “was dumped by [his] long-distance girlfriend” at that time. Ferrell coped and overcame the depression by “playing in a band as a way of trying to put something enjoyable back into [his] life”, which not only worked out but was an important decision for his personal life as well, as he met his wife back then as he played in the band.

Nurturing his happiness ultimately started to "bring the science together’" too. In an interview, Dr. Ferrell mentioned that the inspiration for the music stems from his own life and from those around him- events and experiences that he expressed musically as the guitarist, bassist and on the keys for the “Novemberistas!” since 2016. He not only processed more sad events, for example with the track ‘Everybody’s suffering’, but also wonderful emotions as in ‘I like your eyes’, which he wrote for his wife. Under the production of ‘Magiscope Records’, the band started with publishing a cover, then their own single and finally full albums (three till date). “Try ‘sunflower’ for a start”, a good mood song “that’s going to be the title track from [their] next record”. (see YouTube box on top of the story)

Besides research and his passion for music, Jim Ferrell spends time together with his wife to raise “a bunch of cats and a dog” and “a couple of kids too”. Sometimes he even gets ‘psychological counseling’ from Scout, a four-legged lab member (dog) he adopted from an animal service center, on his way home from lecturing in Buenos Aires.

An outlook to yet another scientific topic

The Ferrell lab currently focuses on (self-) organization of biological systems in space, but also studies ‘other biological processes including cell cycle regulation and apoptosis’. In the next 10 years, the lab aims to solve another question: “I hope we can figure out how the circannual clock works”, Jim Ferrell explains and adds “that’s one of these ‘grand challenges’, we scientists like to work away at from time to time.” He has other personal and professional goals, but “know[s] from experience not to be rigid about such things”. “You just never know..”, Jim Ferrell notes.

What we know is that his science is going strong with numerous publications, and his recently published textbook ‘Systems Biology of Cell Signaling’ , just as life as 'rock musician' with his soon-to-be-released next album with ‘Novemberistas!’.

For more songs from 'Novemberistas!' or news on the Ferrell Lab, please check out the sidebar!