Failure of cells’ ‘garbage disposal’ system may contribute to Alzheimer’s 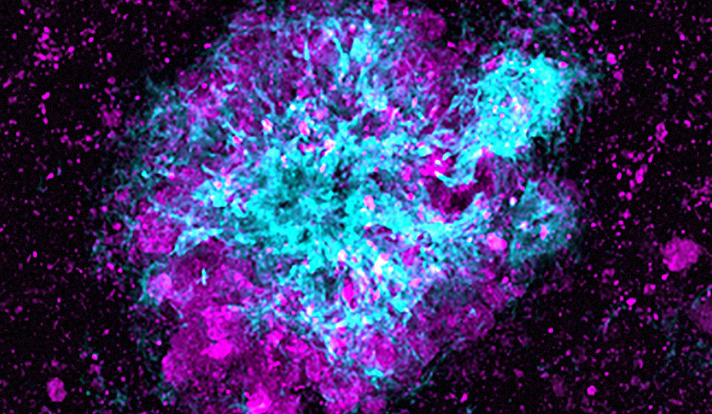 Lysosomes, the “garbage disposal” systems of cells, are found in great abundance near the amyloid plaques in the brain that are a hallmark of Alzheimer’s disease. Scientists have long assumed that their presence was helpful — that they were degrading the toxic proteins that trigger amyloid plaque formation.

However, in Alzheimer’s patients, these lysosomes lack the ability to do their jobs properly, and instead of helping, the accumulation of lysosomes may even contribute to the disease, Yale University researchers report the week of June 29 in the Proceedings of the National Academy of Sciences.

The new findings raise the possibility that coaxing lysosomes to do their jobs could help to prevent the toxic processes that eventually destroy the minds of Alzheimer’s patients.

Scientists first noted the presence of large numbers of lysosomes at amyloid plaques more than a half century ago. This new study suggests the lysosomes that build up in neurons that contact amyloid plaques are abnormally enriched with β-secretase, the enzyme that initiates the production of the toxic amyloid β peptide. These dysfunctional lysosomes lack the ability to degrade β-secretase, the researchers said.

“We think this represents a vicious circle,” said Swetha Gowrishankar, a postdoctoral scientist who led the research in the laboratory of Shawn Ferguson, assistant professor of cell biology

The lysosomes cannot mature because amyloid plaques block the ability of lysosomes to travel within neuronal axons, which in turn results in the local accumulation of more β-secretase and the formation of more amyloid β peptide, the researchers believe.

The team will next use genetic strategies to restore neuronal lysosome maturation and function in mouse models of Alzheimer’s disease in order to determine whether this protects against the development of disease pathology. The researchers also note lysosome dysfunction has been linked to other neurodegenerative diseases including Parkinson’s disease and frontotemporal dementia.

The labs of Pietro De Camilli, the John Klingenstein Professor of Neuroscienceand Professor of Cell Biology, and Jaime Grutzendler, associate professor of neurology, also contributed to this study. All these investigators are members of the Yale Program in Cellular Neuroscience, Neurodegeneration, and Repair.

Funding support for this research was provided by the National Institutes of Health, Howard Hughes Medical Institute, the Ellison Medical Foundation, and The Consortium for Frontotemporal Dementia Research.