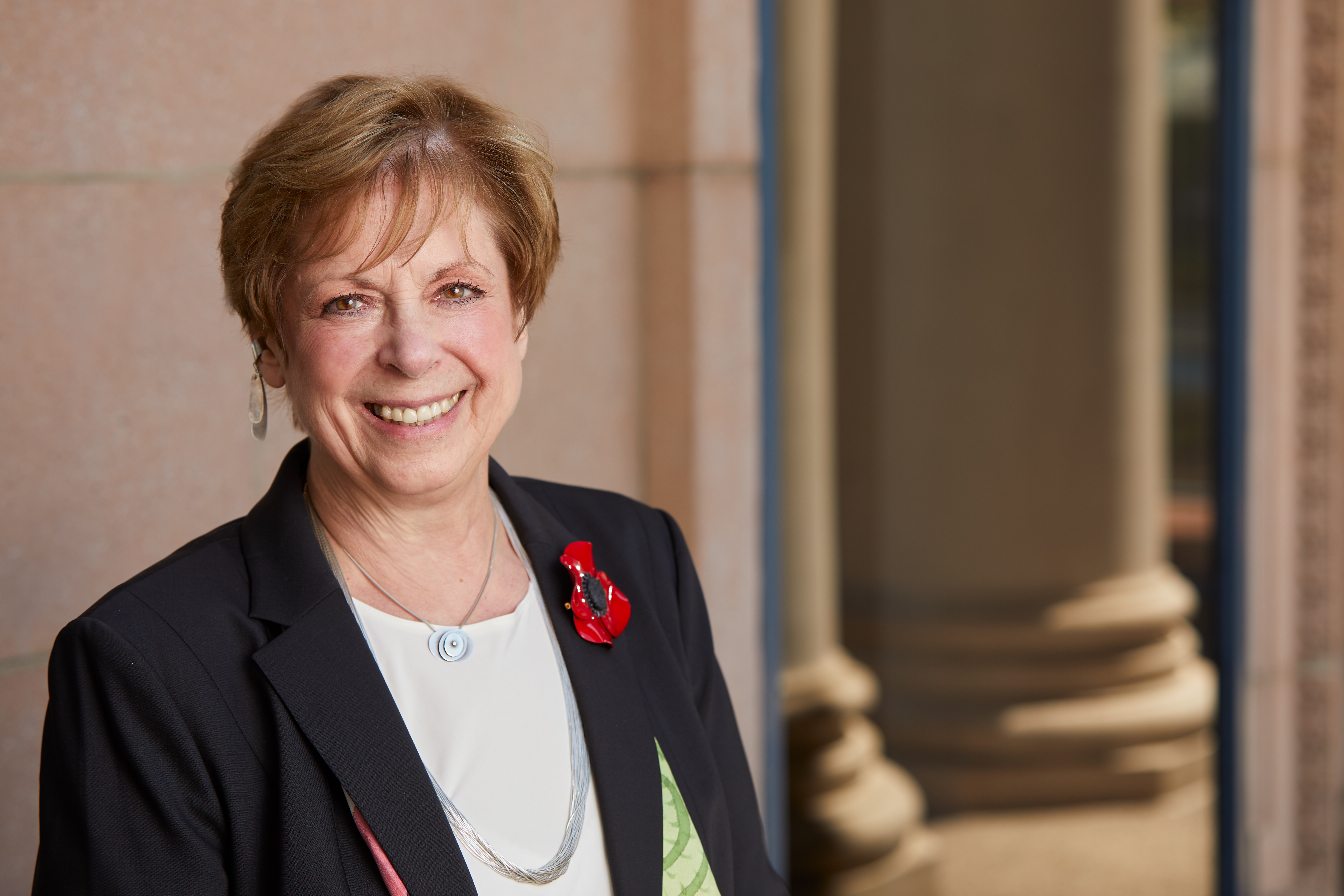 Fisher currently serves on the Governor’s Council and Awards Committee of the Connecticut Chapter of the ACP, and as part of the Awards Committee, developed the idea for this new award. “We wanted to create additional awards to highlight diversity, equity, and inclusion, but also one to honor a woman physician,” explained Fisher. “I was on the committee meetings where we discussed recognizing other women throughout the state to honor. Then a few weeks ago, we were on a committee Zoom call discussing the award and the chair said that they had chosen a winner and that it would be a surprise for someone on this call.”

The committee chair announced that Fisher would win the award, much to her surprise. “I couldn't believe it. To think that they would pick me out of all the possibilities that we had mentioned, made me feel quite humbled. But then when they said they would name the award in my honor? I was ready to collapse,” said Fisher. “It is good to be honored by your peers. And then to have something standing with your name on it, it's just so humbling. It is such an honor, because it means that something with my name will always be there.”

Growing up, Fisher was always interested in science. She thought about going into biology or chemistry but thought it might be too isolating. To her, medicine combined her love of science, interaction with people, not being isolated in a lab, and the ability to take care of people. Fisher was an only child, and the third one in her extended family to go to college. She earned her Bachelor of Science from University of Toledo, and medical degree from Tufts University School of Medicine.

Fisher came to Yale School of Medicine (YSM) for her digestive diseases fellowship in 1974, after completing a gastroenterology fellowship at the Royal Free Hospital in London, England. Her husband John was doing a fellowship in cardiology at Montefiore Medical Center in New York City at the time and the pair thought that settling in Stamford, Conn. would be a reasonable commute for Fisher for two years to New Haven. Little did she realize that she would love Yale and stay for her entire career. Fisher earned a faculty position in 1975 and rose through the academic ranks while working as an attending physician at both Yale New Haven Hospital (YNHH) and the VA CT Healthcare System (VACHS). She was named chief of gastroenterology at the VACHS in 1977, a position she held for a decade. In 1987, Fisher became the first director of the House Staff Training Program for the Department of Internal Medicine.

In 2006, Fisher was one of two people to win the first Parker J. Palmer Courage to Lead Award for Designated Institutional Officials (DIOs) from the Accreditation Council for Graduate Medical Education, which honors excellence in overseeing residency programs. Additionally, she won the Association of Program Directors for Internal Medicine’s highest award, the Dema Daley Founders Award, in 2011.

As program director, Fisher worked closely with Asghar Rastegar, MD, professor emeritus of medicine, who at the time was serving as associate chair for education. Rastegar admires her as an “outstanding clinician, educator, administrator, mentor, and role model to many.”

“As the first director of our residency programs, she set a high bar for the program but also ensured that each resident received the support needed to succeed. There are very few faculty members who engendered the strong sense of loyalty Rosemarie does among our residents. I have no doubt that if you ask one of those residents about their time at Yale, Rosemarie’s name would be mentioned in the first sentence, ‘I was Dr. Fisher’s resident,’” said Rastegar. “What I admire the most about her is her total dedication to each individual who came in contact with her; be it a patient, a resident-in-training, or a young faculty member.”

Stephen Huot, MD, PhD, professor of medicine (nephrology) and associate dean for Graduate Medical Education was a resident under Fisher’s tutelage. “To those of us who have had our lives enriched personally by Rosemarie, we know her not only for her excellence as a clinician, as an educator, as a program director, as a dean, as a national leader in education, we know her as a trusted confidante and dependable friend,” said Huot.

In 1992, Fisher became professor. Six years later, Fisher was appointed as the first Designated Institutional Official/Director/Associate Dean of Graduate Medical Education (GME) at YNHH and YSM. As associate dean, Fisher oversaw substantial growth of the residency and fellowship training programs to over 100 programs and more than 1100 trainees.

In 1998, Deborah Proctor, MD, professor of medicine (digestive diseases) arrived at YSM and was immediately impressed with Fisher. “She took my hand and warmly welcomed me to Yale. She made me feel as if we had known each other all of our lives. Since then, she has been an unwavering supporter of mine—professionally as well as personally. She has given me work advice, scoping advice, writing advice and education advice, as well as child care and school advice for my kids. I am honored to call her a friend,” said Proctor.

Deputy Dean for Education Richard Belitsky, MD, Harold W. Jockers Associate Professor of Medical Education and associate professor of psychiatry, expressed his gratitude to Fisher. “She is an exceptionally talented, incredibly smart, and wonderfully kind colleague. Throughout my career, she provided invaluable support and guidance, and she was always the go-to person to help sort out the most difficult and complex situations, which she always approached with clarity, thoughtfulness, and sensitivity toward everyone involved. There are few like her, and her impact on so many faculty and trainees at our school has been profound,” said Belitsky.

She was associate dean until 2016, when she transitioned into the newly created role of GME Director of Resident/Fellow Wellbeing. Fisher became professor emerita in July 2019 but is still involved as the director of the “Call A Friend” Resident/Fellow Peer Support Program, advises the Wellness Council as part of the Resident Fellows Senate, and is actively seeing patients clinically and precepting the GI Fellows’ Clinic at Yale.

Nita Ahuja, MD, MBA, FACS, chair and William H. Carmalt Professor of Surgery, and assistant cancer center director, surgery, Yale Cancer Center, credits Fisher as the reason she came to Yale. “I had the good fortune of meeting Dr. Rosemarie Fisher during our work together with the AAMC [Association of American Medical Colleges] while I was still on faculty at Johns Hopkins. It was her kindness, generosity of mentorship, and passion for academic medicine that magnetized me to Yale, where I am so grateful to have found a community of people who, like Rosemarie, live and breathe a mission that resonates with me deeply.”

Although the ACP award is the most recent, it is not the first honor in Fisher’s name. In August 2018, the Rosemarie L. Fisher, M.D., GME Leadership Award was created to recognize extraordinary accomplishment in graduate medical education, being its first recipient. This annual award is given to a member of the GME community of YNHH and YSM who has made substantial contributions to advance the training of residents and fellows. In October 2018, the Section of Digestive Diseases marked the 100th anniversary of women at YSM by establishing annual lectureships to honor of Fisher and her longtime colleague Guadalupe Garcia-Tsao, MD. Various speakers in different stages of their academic careers will reflect the diversity of career paths within Digestive Diseases. The inaugural Dr. Rosemarie Fisher Lectureship was held in January 2019.

She was named one of the Outstanding American Gastroenterological Association Women in Science in 2008. Fisher has been honored as a visiting professor at the University of Pennsylvania, Washington University and Case Western Reserve University, to name a few. She won the Distinguished Service Award from the YSM Department of Surgery in 2016. In addition, Fisher is a fellow of the American Gastroenterological Association (AGA), the American College of Gastroenterology (ACG) and of the American Association for the Study of Liver Diseases (AASLD). She was honored with an ACP mastership in 2016. She won the Laureate Award from the ACP Connecticut Chapter in 2017, and the George Thornton Teaching Award in 2014, and the following year was named a fellow of the Royal College of Physicians. Fisher is a member of any societies including the AASLD, AGA, American Society for Parenteral and Enteral Nutrition, American College of Gastroenterology, the Association of Program Directors of Internal Medicine, and the American College of Physicians . In 2011, she was chosen to become chair of the AAMC's newly formed Council of Faculty and Academic Societies and served on the Board of Directors of the AAMC from 2011-2015.

“All of her accomplishments would sound to most people as being more than a cup full. However, she continued to function as a gastroenterologist in the Section of Digestive Diseases all of these years, with a busy clinical and endoscopic practice. Her patients loved her and if she did not have as many administrative functions to take care of, she would have had several more patients appreciative of her expertise and caring,” explained Kapadia. “Beyond serving as a respected clinician in the Section of Digestive Diseases at Yale, she was also very highly respected in the AGA. At a time in history when very few if any women held positions of leadership in the association, Rosemarie was a trailblazer and served on several committees. Today, women occupy several major positions in the association. In no small measure, they owe the justifiable recognition that they receive to those few women in the earlier days, of which Rosemarie Fisher was one.”

Fisher doesn’t feel comfortable being called a trailblazer, but by its definition, she is one.

“I want people to know that I cared about them and their advancement in their careers. I supported them in educational activities and in patient care activities. I want them to think that maybe I was at the forefront of these women, especially coming from Yale, that helped push back the boundaries in education and in leadership within the medical school. If I could look back and say to everybody, ‘I've been here, and I've done all this stuff, and you're now recognizing it, and that's great. But make sure that other women know that they could do this too,’ and that's my goal. I probably do more mentoring now than I've ever thought I could do. And I hope I help other women realize that they could do what they want to do,” said Fisher.

Per the ACP, this award was created in 2020 to honor an "outstanding female physician leaders who have made significant contributions to the science and/or practice of internal medicine, medical education or medical leadership, thus serving as exemplary role models for other female physicians.” Fisher will receive the award virtually at the CT ACP Annual Meeting on October 18, 2020.