For decades, two of the most precise imaging methods used to study the human brain, functional magnetic resonance imaging (fMRI) and Positron Emission Tomography (PET), have identified localized brain responses to sensory stimulation, such as touch, vision and smell.

But when scientists use the same imaging tools to look for brain responses to the mental processes that underlie behavior, such as memory and emotion, similar localized responses have not been found. Their efforts have been based on the premise that mental processes have distinct innate representations in the brain that can be localized by functional neuroimaging. In a recently published paper, researchers from the Yale School of Medicine’s Department of Radiology & Biomedical Imaging’s Magnetic Resonance (MR) Research Center argue that results from experimental fMRI results show that the premise is flawed.

The premise derives from cognitive psychology, which is the standard theory used to interpret functional images. Cognitive psychology arose based on criticisms of the behavioral psychology, a theory of learning based on the idea that behaviors are acquired through conditioning. Sixty years ago, Noam Chomsky revolutionized the field of linguistics when he said that behaviorism failed to account for the biologically based processes that occur in the brain during the development of language, and that an explanation of children’s ability to learn a language required the pre-existence of innate cognitive processes.

In their paper in Frontiers in Human Neuroscience, Robert G. Shulman, PhD, Sterling Professor Emeritus of Molecular Biophysics and Biochemistry and Douglas L. Rothman, PhD, professor of Radiology & Biomedical Imaging and the co -Director of the Yale MR Research Center, explain how, through analyzing neuroimaging studies, they and others have found that the expectation of clear localization of mental processes in the brain (referred to as functional segregation) by fMRI was not being met. Previously, this lack of agreement was explained as being due to limitations in the neuroimaging methods or to the brain having the same regions support multiple mental processes (called lack of functional segregation). However, they propose a novel explanation that the lack of functional segregation is not due to limitations in the imaging, but rather indicates that the hypothesized cognitive processes are not supported by the brain. 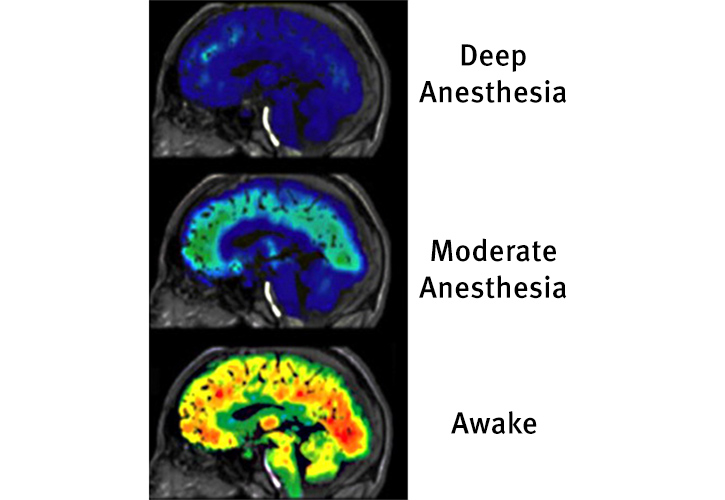 “They believe there’s an innate ability to do language that we are all born with,” said Shulman, a contemporary of Chomsky’s. “While I can’t disagree, I can generalize and say this isn’t working out in the functional MRI field.”

This conclusion, said Rothman, “has raised into question the role of mental processes as presently formulated in neuroimaging of behavior.”

Shulman and Rothman propose an alternative view that combines neuroimaging and observed behavior, the Non-Cognitive Behavioral Model (NBM). “What (Shulman) proposes is that the theory should start not from the top down, where you accept a theory and try to find where the brain implements it, but from the bottom up, where we look at what the brain does, based on the imaging, and derive theories from that,” Rothman said.

In the paper, PET and fMRI neuroimaging studies looking at loss of consciousness were analyzed using the NBM.

“We have a very empirical approach,” he added. “We say, we don’t know how to define consciousness, but we do agree on the behavior that makes one say that a person is in the state of consciousness.”

Previous neuroimaging studies had tried to assign a small region of the brain to explain loss of consciousness during anesthesia and coma based on the assumption that a functionally segregated mental process was associated with it, with inconsistent results. But when re-examined using the NBM approach, the authors, along with D.S. Fahmeed Hyder, PhD, professor of Radiology & Biomedical Imaging and Biomedical Engineering, found that the main difference was global brain neuronal activity that the imaging measures through energy consumption. This large signal was previously ignored because it was assumed, based on theory, not to be relevant to consciousness.

“We understand the behavior that a person has when she is in a state of consciousness, and that she loses when she is anesthetized or goes into a coma,” Shulman said. “Our method shows that when a person is in a high state of consciousness, there is a high level of energy consumption throughout the brain; it is not localized,” Shulman added as he tapped his finger across the sides and back of his head.

“This value follows the person’s behavior, being low during coma or deep anesthesia and rising at lesser anesthesia or during recovery from coma,” Rothman said. “This parameter of total non-localized brain activity avoids the poor fits to the data previously introduced by assuming that a localized region is responsible for the state of consciousness.”

Subsequent studies of coma validated the NBM prediction by showing that global brain neuronal activity, as measured by PET, correlated better with consciousness than previously assigned local regions in the brain.

The paper further shows that facial and object recognition provided evidence that experience and neuroplasticity -- the capacity of the nervous system to develop new neuronal connections -- play key roles in determining patterns of brain activity, the authors said.

“The brain works in a different way – not innate localized mental processes. It starts with a blank slate, and on the blank slate behavior writes, and when it repeats itself it digs in – it activates the brain over and over again,” said Shulman.

“Functional MRI results show that, as expected by NBM, there are no innate localized mental processes for object and face recognition, but rather training of brain plasticity is necessary to create reproducible brain responses,” Shulman said.

The NBM explains the lack of functional segregation in existing imaging data, he added. “The bottom-up approach, which emphasizes neuroplasticity and includes all brain activity, is a valuable measurement for future experiments.”