School of Medicine Alumni return to campus for fellowship and camaraderie

Alumni of Yale School of Medicine gathered on Cedar Street during the first weekend in June, to reunite and reminisce with old friends and colleagues. With a full slate of activities scheduled for June 1 and 2, they split their time between socializing and attending the AYAM executive meeting, hearing the dean describe the State of the School, learning about changes in the curriculum, or touring the medical campus to observe changes since they spent their days on Cedar Street.

A century of women at YSM 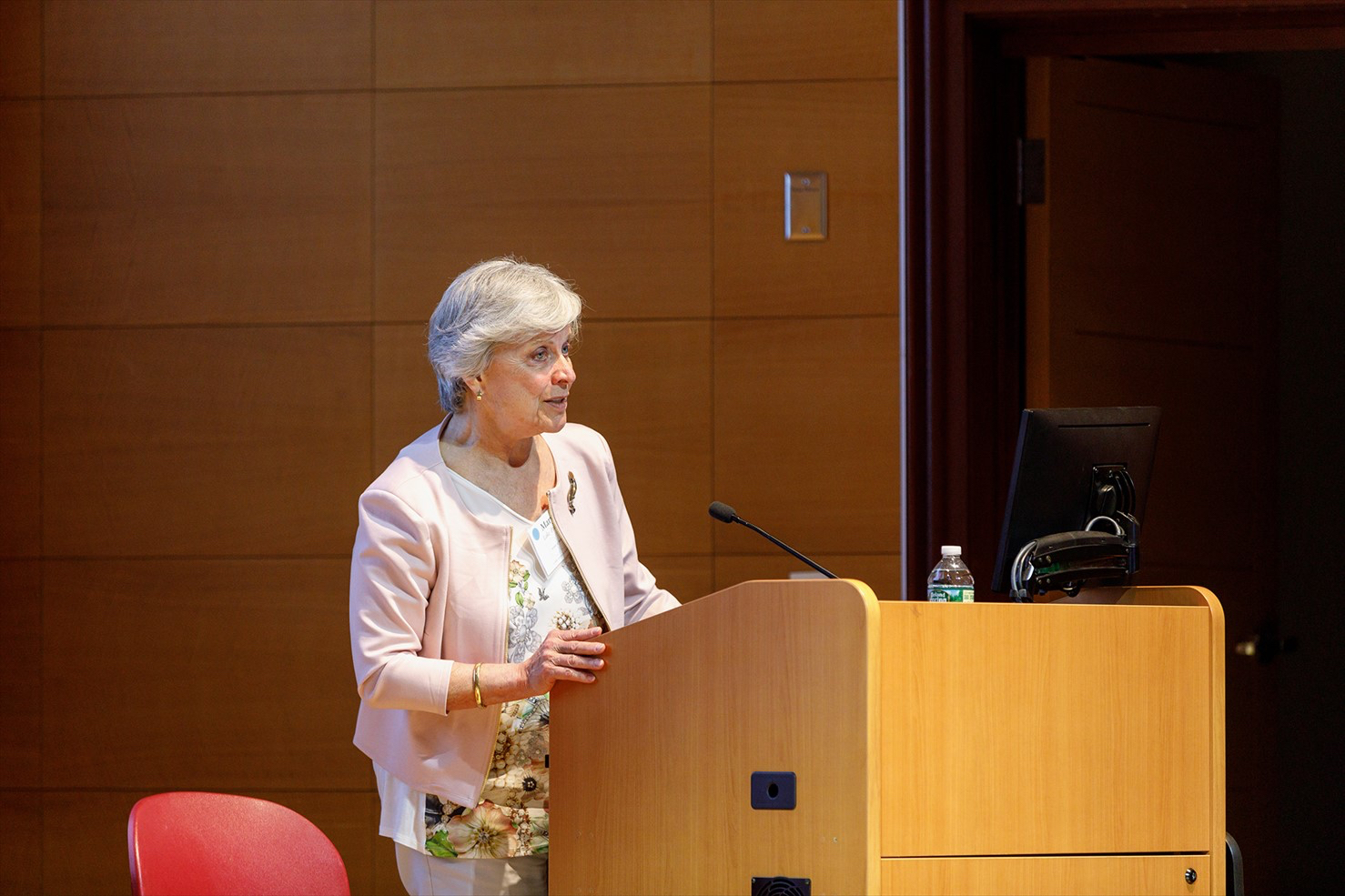 The weekend began on June 1st with a symposium celebrating 100 Years of Women at Yale School of Medicine. The event included panels and presentations focusing on both the advances by women since the lack of a bathroom stymied their admittance to the medical school a century ago and the glass ceiling that still impedes true professional equality. Hundreds of students, faculty, staff, and alumni attended, along with local dignitaries including Lonnie Reed, State Representative from Connecticut’s 102nd District.

In her keynote speech, Juanita L. Merchant, MD ’81, PhD ’84, H. Marvin Pollard Professor of Gastrointestinal Sciences, professor of internal medicine, and professor of molecular & integrative physiology at the University of Michigan, discussed the phenomenon of few women reaching the upper echelons of authority in the medical world. Other panelists echoed Merchant’s observations and took them further, such as when Susan Baserga, MD/PhD ’88, FW ’93, professor of molecular biophysics and biochemistry, of genetics, and of therapeutic radiology at the School of Medicine, brought up pay disparity and the presence of casual sexism throughout professional settings.

“I thought the symposium was really incredible,” said Shirley McCarthy, MD ’79, PhD, HS ’84, professor emeritus of diagnostic radiology, “it really affected me at a deep level, and put me on an emotional roller coaster of sadness and joy. As other attendees said, something resonated very deep, listening to women tell their stories.”

Over 700 people registered for the symposium, and Harkness auditorium was packed from the first event of the morning through the last event of the evening. The Rose Garden was filled afterward with people mingling, as they exchanged stories and reflections from the talks. 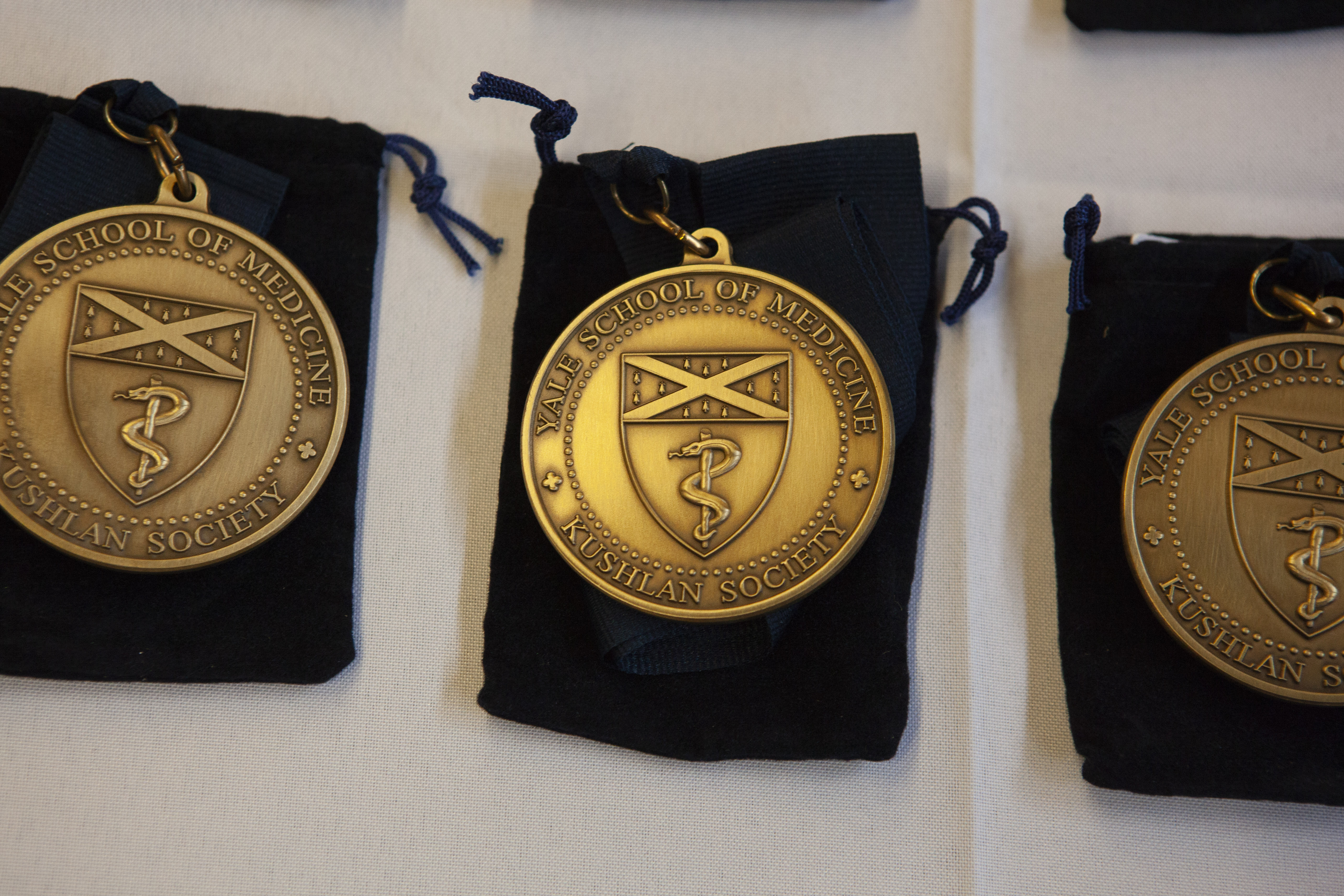 On Friday evening, members of the Class of 1968 gathered in the Historical Library for their induction into the Samel D. Kushlan, MD ’35 Society. As afternoon sun filtered through the room’s windows, illuminating a small audience of graduates and spouses, Harold Mancusi-Ungaro, Jr., MD ’73, president of the Association of Yale Alumni in Medicine, read names from a list. Those physicians present stood, then, one by one, made their way to a table, where Dean Robert J. Alpern, MD, Ensign Professor of Medicine, presented them with a medallion.

The Kushlan society, named in honor of Samuel D. Kushlan, MD ’35, was formed in 2013 to recognize alumni for longstanding support of and affiliation with the School of Medicine. Kushlan contributed years of enthusiastic service to Yale, attending events, offering mentorship, and stitching together the social fabric of the university through his steadfast presence. Even when he was well into his 90s, Kushlan was a constant presence at internal medicine grand rounds every Thursday morning.

“It was a privilege to preside over the Kushlan society ceremony,” said Mancusi-Ungaro. “I knew Dr. Kushlan from when I rotated on the medical service at what was then called the Memorial Unit … I remember thinking ’50 years!’ Lord willing, I’ll be a member at my next reunion.” 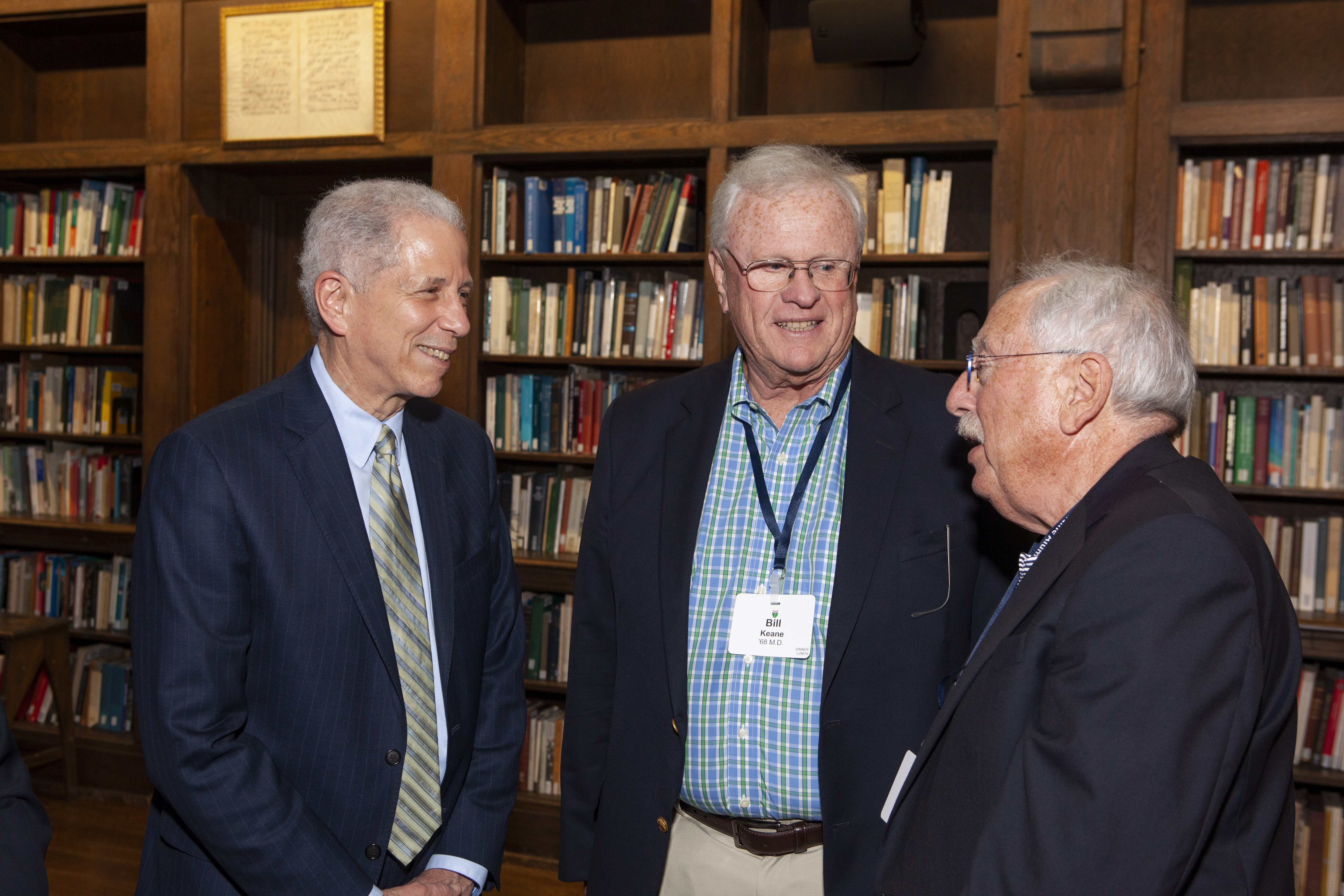 Attendees were excited to participate in Saturday’s events. Sydney Butts, MD ’98, vice chair and chief of the Division of Facial Plastic and Reconstructive Surgery at University Hospital of Brooklyn/SUNY Downstate, had returned to campus for the first time in a decade. “I’m happy to be back,” she said, “I have so many happy memories of Yale School of Medicine. It was a wonderful group of people that were produced by a rich academic environment.”

Marjory Alabre, MD ’98, a cardiologist practicing in Westchester, New York, was visiting with Butts, whom she had not seen in nearly 10 years. “It’s so amazing,” she said, “catching up with classmates.”

Other alumni were similarly inspired by the renewal or maintenance of long-time friendships, such as those observing the fiftieth year of their graduation. “We took over the New Haven Hotel and from two to five on Saturday, everyone caught up with each other,” said Elizabeth M. Short, MD ’68. “It was a very intimate reunion.”

“By the time you’re retired and you’re 75, you don’t need a full day’s schedule—just an opportunity to catch up with friends you might not have seen in decades.”

During the morning sessions in Harkness auditorium, Dean Robert J. Alpern, MD, Ensign Professor of Medicine delivered his State of the School address. “We’ve had a successful few years,” said Alpern. “Between fundraising and attracting top talent, the School of Medicine has never been stronger. The strong alumni community is a big part of that success.” At the end of the address, Alpern and Mancusi-Ungaro issued Distinguished Alumni Service Awards to Harold P. Kaplan, MD ’63, Laura K. Manuelidis, MD ’67, and A. Richard Pschirrer, MD ’62 (posthumous).

Following the address and award presentation, Marcella Nunez-Smith, MD, MHS ’06, associate professor of medicine (general medicine) and of epidemiology (chronic diseases), director of the Equity Research and Innovation Center, and director of the Center for Research Engagement, discussed the effects of last year’s hurricanes on Puerto Rico, and Richard Belitsky, MD, HS ’82, FW ’83, deputy dean for education and Harold W. Jockers Associate Professor of Medical Education and associate professor of psychiatry, and Michael Schwartz, PhD, associate dean for curriculum, described changes to the medical curriculum. Meanwhile, on two career-focused panels, alumni discussed where the choices they’d made after medical school had led them.

In the first panel, “The Paths We’ve Travelled,” moderated by Robert G. Greenly, MBA ’83, an executive coach and organizational effectiveness consultant, alumni discussed steps that they had taken at Yale or afterward to reach their personal and professional goals. Harold P. Kaplan, MD ’63, described his bench research in support of NASA’s Apollo program, done while serving in the Air Force, his subsequent four decades of private medical practice, followed by a dozen years in hospital administration, and finally, the energy required to launch the new medical school at Quinnipiac University in neighboring North Haven, CT, and join the “founding faculty”. The new medical school has now graduated two classes. Mancusi-Ungaro spoke about his experiences and events that lead to his transitions in leadership positions in academic plastic surgery at three different schools, to community practice in Texas, and finally to work for Kaiser Permanente in California. He retired in 2013 as chair of the chiefs of plastic surgery for The Permanente Medical Group, the largest department of plastic surgeons in the country. Judith A. Melin, MA, MD ’83, a deputy editor at UpToDate, an online clinical decision support resource, and a primary care physician at Lahey Health, a primary care and specialty network in Massachusetts and New Hampshire, discussed her background in chemistry and how she overcame challenges to achieve her professional objectives.

The next panel included Myles Greenberg, MD ’93, president and CEO at Alucent Biochemical; Ohenewaa Ahima, MD ‘10, a commissioned corps officer in the United States Public Health Service working at the FDA, and Gregory Raskin, MD ’98, vice president of technology development at Memorial Sloan Kettering in New York. They explored startup culture, the synergy between investment and medicine, and ongoing technological evolution in the United States.

At the day’s final panel, “Yesterday, today and tomorrow: where have you been, where are you, and where are you going?” Greenly offered a condensed version of a five-hour course he teaches for professionals transitioning between careers. Alumni participated in self-evaluations guided by Greenly, who changed his own career path after a car accident forced him to leave a leadership position at the MIT Sloan School of Management. Forced by the injury to withdraw from academic administration, he started a leadership consultancy instead: “I thought my life was over,” Greenly said, “Now I look back and realize it was just the beginning.” He added, “the most important elements for happiness are satisfying relationships and a purpose.”

Looking back on the weekend he and the AYAM helped organize, Mancusi-Ungaro expressed gratitude and satisfaction. “Alumni don’t have to come back,” he said. “They passed their courses, they have their degrees. They come back because most retain a love for the school, and an interest in its progress and status in the world.”

“To be involved with designing the program and inviting guests is an honor,” Mancusi-Ungaro added. “I consider it payback for what Yale and the school of medicine have given me.”

Submitted by Adrian Bonenberger on June 19, 2018