One of the primary missions of Women’s Health Research at Yale is training the next generation of scientists to study the influence of sex and gender. And perhaps there is no one better to voice that necessity than a member of that generation.

“I always thought it was unbelievable that people could conduct preclinical studies without reporting the sex of the animals or cells they are using,” said Yasmin Zakiniaeiz, a fourth-year graduate student pursuing a Ph.D. in neuroscience at Yale School of Medicine. “It’s a shock that this still goes on.”

In an effort to raise awareness about the importance of studying sex and gender differences, Zakiniaeiz and other editors of the student-run 88-year-old Yale Journal of Biology and Medicine (YJBM) decided to devote Volume 80, Issue 2 to topics addressing sex and gender.

“I’ve always had a drive for understanding and learning about sex differences,” said Zakiniaeiz, who studies the neural mechanisms of drug addiction with Drs. Kelly Cosgrove and Marc Potenza in a lab Cosgrove runs with Dr. Evan Morris. “I thought that by serving as deputy editor for this issue, I could expand my knowledge of sex and gender issues beyond neuroscience.” 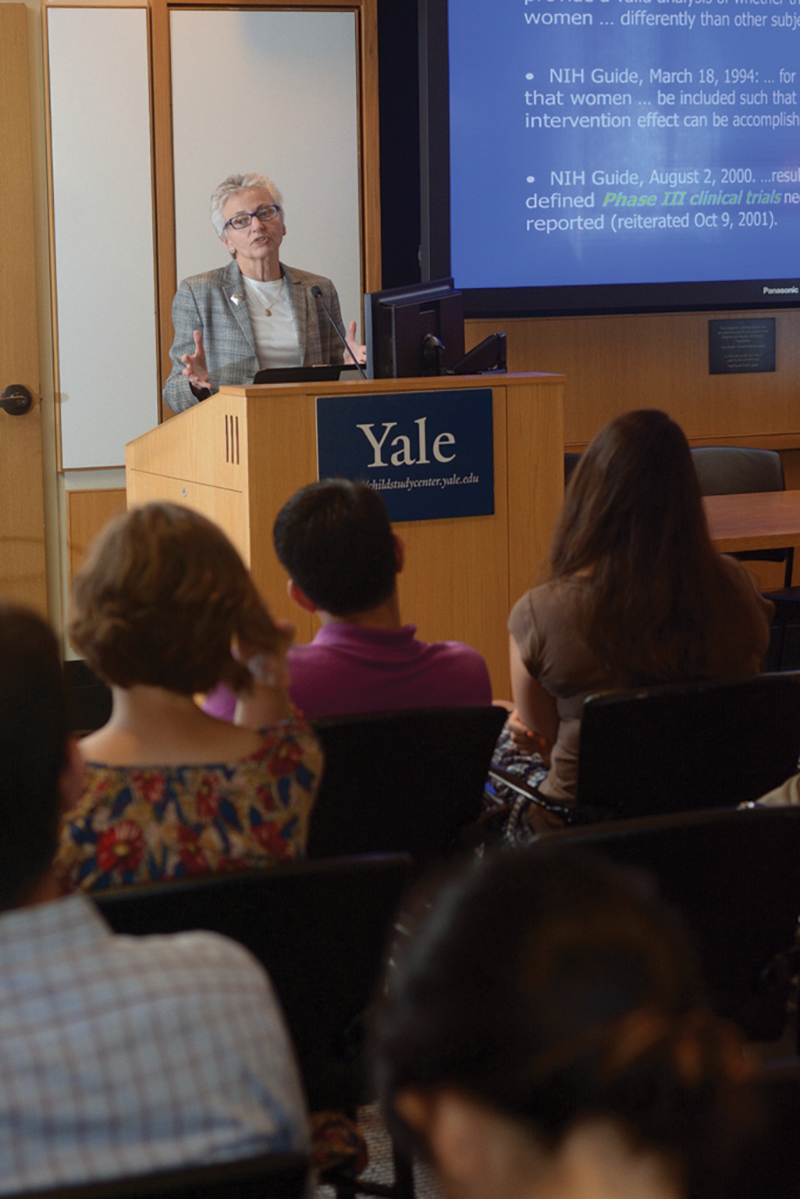 The issue came out in June with peer-reviewed articles addressing the influence of sex and gender on smoking, stress and depression; the effect of tobacco smoking on mothers’ brains; the preference patients show for the gender of their physicians in a hospital’s Emergency Department; the effects of gender-based violence on unwanted pregnancy and abortion; the effect of marijuana on the female reproductive system; and other topics.

In addition, Zakiniaeiz, Cosgrove, Mazure, and Potenza wrote an article together on addressing sex differences in preclinical research.

“I’m really happy with it,” Zakiniaeiz said of the issue. “It’s important to increase attention and increase knowledge. People are just not aware.”

Dr. Mazure praised the YJBM issue and her experience working with the editorial staff. Both she and Zakiniaeiz remarked on the timeliness of the issue, arriving in the same year that the National Institutes of Health, the single largest source of biomedical research funding, began to implement a policy calling for grant recipients to use and report results for both male and female animals in preclinical studies unless they provide strong justification for studying only one sex.

“The new NIH policy change has the potential to close the gap in knowledge that has persisted for decades,” Mazure said. “But it will largely fall on up-and-coming researchers like Yasmin to hold true to these ideals and make sure that sex and gender are fully embraced as variables in study design and fully analyzed and reported in published results.”

Already, Zakiniaeiz has convinced Dr. Michael Schwartz, Associate Professor of Neuroscience and Associate Dean for Curriculum, to add the study of sex differences in the brain to the curriculum of the first-year neuroanatomy course she helps teach.

“I think it’s a really important topic,” she said. “I realize that I could make a difference in the course I’m teaching and spur others to incorporate the study of sex and gender as a fully integrated component of a medical education.”