Getting Under the Skin

Squamous cell carcinoma, or SCC, can grow rapidly, cause pain, and is more common in women than men.

When women seek treatment for this skin cancer commonly found on lower legs, they face a large menu of options.

Potential interventions include scraping or cutting away the cancerous growth and burning what remains with an electric needle. A physician might opt to inject a drug locally into the tumor to cause destruction. Sometimes a cream or lotion can remove a very superficial cancer.

More aggressive methods include simple excisions in which a surgeon cuts out the affected skin. Or even more involved procedures in which the cancer is removed one layer at a time and examined under a microscope to make sure no damaged cells are left behind. Some patients undergo a therapy to kill the cancer cells with high-energy radiation. If the cancer has spread to the lymph nodes — structures that help rid the body of harmful substances — or far-away organs, a physician might recommend systemic chemotherapy.

Treatment decisions are paramount because choosing a more aggressive treatment for a mostly indolent, or slow-growing, skin cancer can unnecessarily leave a patient with painful open sores at the site of removal. Choosing a conservative treatment for a cancer that ultimately proves aggressive through recurrence or by spreading to a new location could require a more invasive treatment later with worse health outcomes.

Now, Dr. Christine J. Ko, a Professor of Dermatology and Pathology at Yale School of Medicine, has identified a promising method to predict the growth rate of SCC and better guide treatment decisions.

In Ko’s clinical practice, her extensive training and experience diagnosing all kinds of skin cancers in the laboratory often leave her questioning present diagnostic criteria and systems of classification.

Currently, Dr. Ko and her colleagues have no absolute way to determine if a sample of SCC viewed under a microscope might be keratoacanthoma, a less aggressive form that can go away on its own, or a more aggressive and dangerous variety with potential to spread. Certain clues are sometimes helpful to predict aggressive behavior — tumor size, growth of cancer cells around nerves or into blood vessels, cancer cells that look less like normal tissues — but many tumors lack those features. And it remains difficult to predict long-term outcome in most cases.

“The public often thinks that the diagnosis of cancer is black and white,” Ko said. “But genetic analysis of tumors is showing us that there is definitely a gray zone. A growth may be not quite benign but not quite malignant. We need to be able to clearly differentiate in order to determine the best management and treatment.”

In a study funded by WHRY with co-funding from the Yale Comprehensive Cancer Center and published last year in the Journal of the American Academy of Dermatology, Dr. Ko and her coauthors found evidence that sequencing the precise order of the code embedded in a specific gene could serve as a biological marker to better classify SCC.

“When a pathologist determines if a skin sample is or isn’t squamous cell carcinoma, it involves a visual examination with a certain amount of individual interpretation,” Ko said. “We need more objective criteria. If we knew 100 percent of the time that the presence of specific mutations were markers of an aggressive form of SCC, then we could be more sure of the diagnosis and recommend the best course of treatment for that patient. Conversely, absence of those mutations could predict a slower growing course and the appropriateness of a more conservative therapy.”

The “Guardian of the Genome”

About one million cases of squamous cell carcinoma are diagnosed in the United States each year, an increase of about 200 percent over the last 30 years. Caused mainly by exposure of the skin to ultraviolet light from the sun, SCC is most often cured when detected early and treated properly. But every year as many as 8,800 Americans die from the disease. And others are left disfigured or in pain. 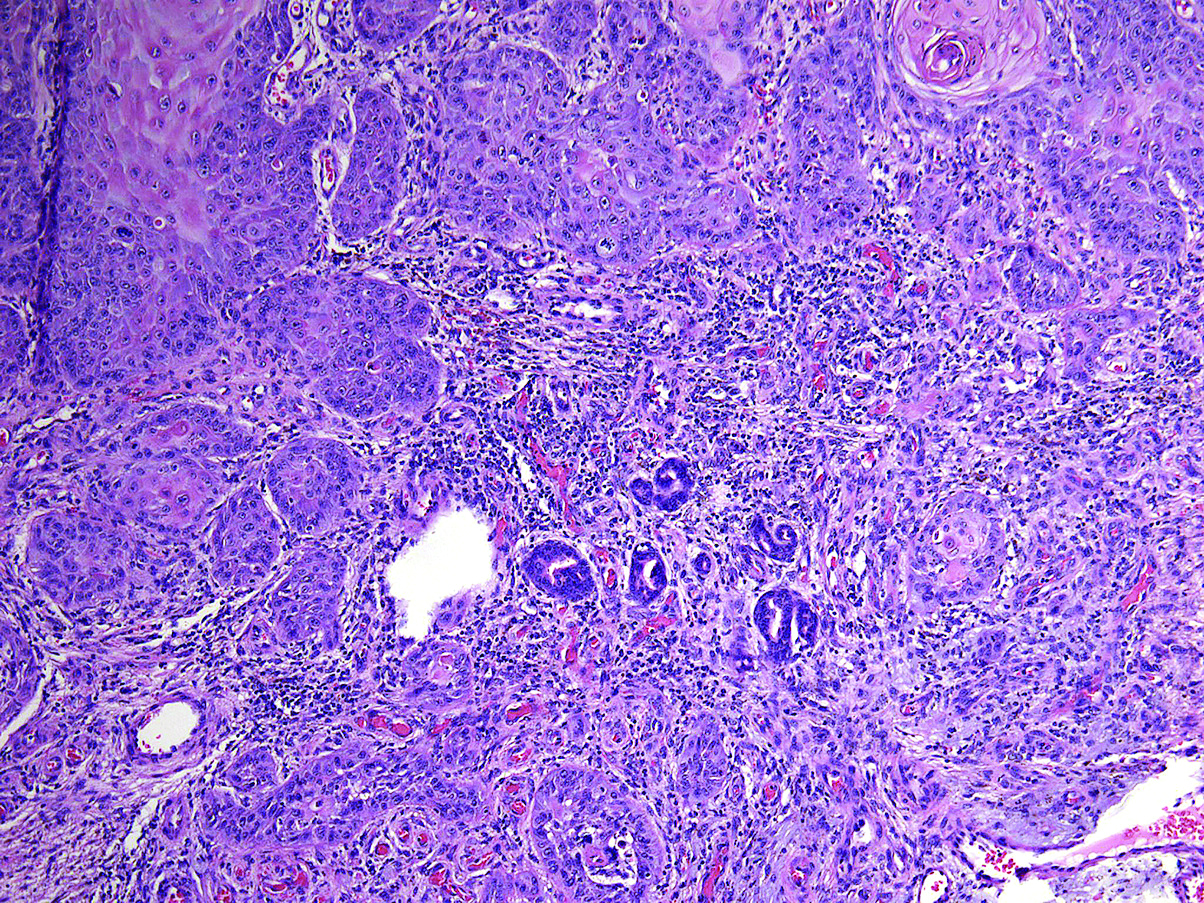 Dr. Ko and her colleagues noticed that female patients over 70 often had multiple lesions on their legs with many features in common with slow-growing keratoacanthoma. She designed a study seeking to determine whether samples of such lesions obtained from the lower legs of female patients would be similar genetically to keratoacanthoma, which most dermatologists today still consider a form of SCC. Her evaluation focused on attempting to detect mutations in a gene called TP53, known as “The Guardian of the Genome” for its role in protecting DNA from mutations.

Most cancers, including SCC, have many mutations, permanent changes in the sequence of the genetic code through replication error or unrepaired damage. In fact, between 60 and 90 percent of SCC tumors show changes in the TP53 gene, specifically in the DNA-binding region that plays an important role in DNA replication and repair. A minority of keratoacanthomas have TP53 mutations, and if they are present, they are in a different region of the gene.

Ko’s team studied samples that all met criteria for SCC as previously diagnosed by a pathologist. The researchers used ultra-deep sequencing to read the DNA code, a method involving increased precision in correctly detecting mutations.

Out of the 30 samples sequenced, 20 had no TP53 mutation at all. This result is particularly striking because sequencing often involves reading samples more than 500 times, but Ko’s team looked at the DNA samples an average of 2,000 to 3,000 times to reduce potential errors.

“It was surprising that 20 out of 30 tumors didn’t have a TP53 mutation if they are really conventional SCC,” Ko said. “These results are more in keeping with the tumors being closer to keratoacanthoma. And it’s not likely we missed mutations, because they should have been detected with the ultra-deep sequencing.”

In addition, Ko reviewed each tumor microscopically, intentionally unaware of the results of the DNA sequencing so as to avoid influencing her evaluations. She visually categorized 16 of the tumors as having similar features, resembling an early form of keratoacanthoma. Fourteen of the tumors remained classified as conventional SCC, which keratoacanthoma mimics in its growth stage. Of 14 tumors she classified as SCC, 10 had mutations, none of which were in areas of the gene known to be highly mutated in conventional SCC, and two of 10 were in a region like mutations found in keratoacanthoma.

All 16 she classified as resembling an early keratoacanthoma did not have a TP53 mutation.

Ko and her colleagues concluded that the absence of a TP53 mutation and the presence of keratoacanthoma-like mutations in these samples suggested that the lesions might more accurately be diagnosed as keratoacanthoma in early and growth stages. This type of skin cancer can grow rapidly but ultimately does not have an aggressive course. 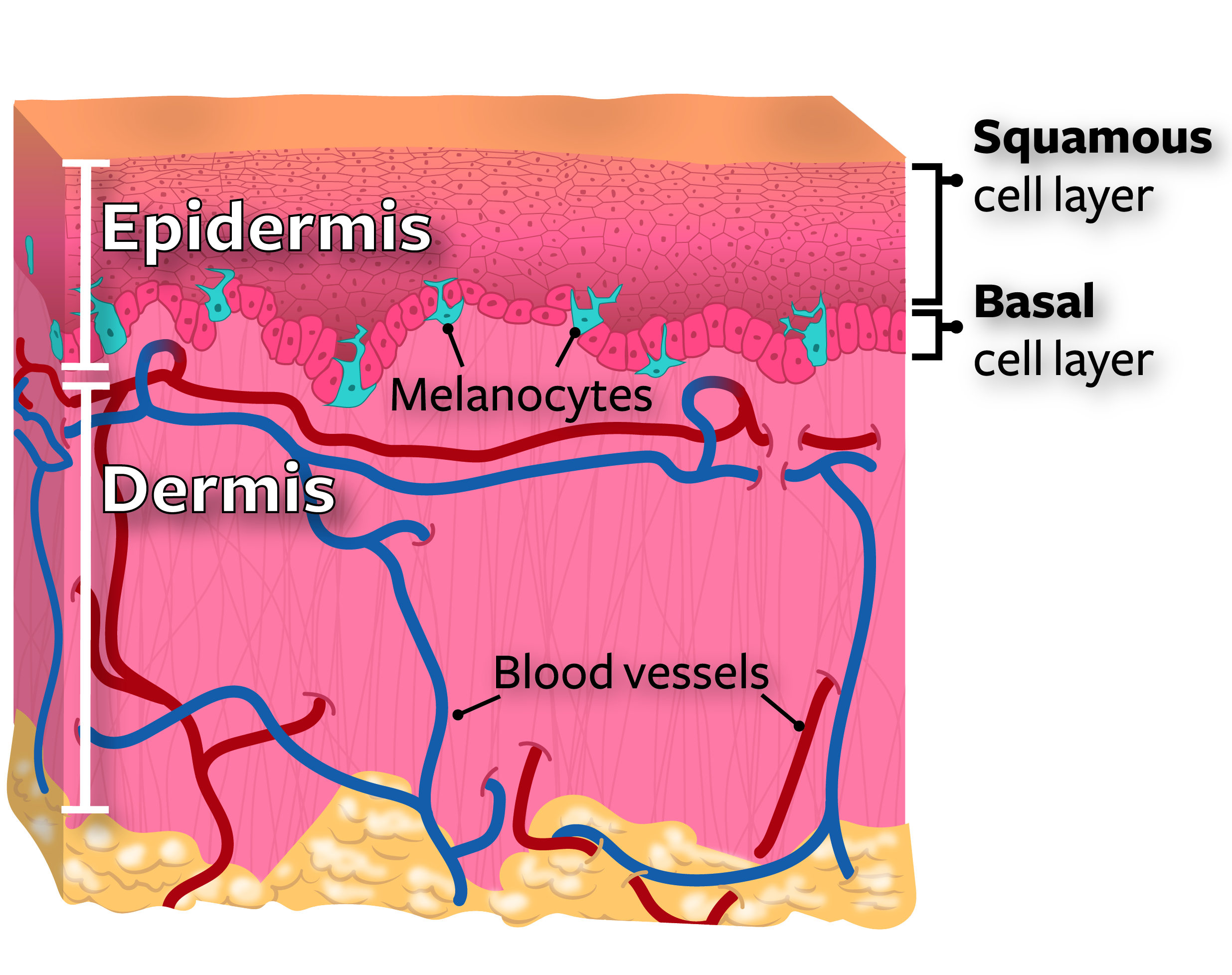 “We were able to show that these lesions, classified as squamous cell carcinoma before the study, either lack TP53 mutations or have mutations in TP53 that are different from previously described mutations in SCC,” Ko said. “These results point toward an effective way to predict slow-growing, less aggressive behavior in skin cancer and direct appropriate treatment and management for patients.”

Ko envisions that with more data on the particular TP53 mutations associated with indolent and aggressive SCCs, TP53 sequencing tests could be developed as an inexpensive commercially available method to aid in diagnosis and treatment plans.

She expressed confidence in achieving her goal by studying more of these tumors, collecting more data on the specific mutations in tumors with known aggressive vs. indolent behavior, and reaching a better understanding of how particular gene mutations can guide treatment decisions.

“What really is a skin cancer?” Ko said. “What, if left alone, would harm the patient? We know a bit more now, and we are making progress every day.”

Dr. Christine J. Ko earned her M.D. from New York University and her B.A. from Princeton University. She is currently a Professor of Dermatology and Pathology at Yale School of Medicine.

Her research into skin cancer has targeted clinical subsets of cutaneous squamous cell carcinoma, including keratoacanthoma.