Yale doctors have developed a way to create vascular grafts from stem cells that are as strong as the original blood vessels they would replace.

The advance, demonstrated in an animal model, may lead to bioengineered grafts suitable for transplant into any human patient using universally compatible cell lines, said the researchers.

Vascular grafts are used in surgical bypass operations to reroute blood flow within the body. They are used for a variety of medical needs, including coronary artery bypass operations (200,000 per year in the U.S.). They also provide vascular access for hemodialysis treatments after kidney failure (more than 400,000 Americans each year).

Doctors say there is an urgent need for strong, flexible vascular grafts to help those patients, as well as patients with injuries. Currently, most grafts come from blood vessels located elsewhere on the patient’s body, such as the leg. There are also synthetic grafts made from Teflon and Dacron, as well as grafts donated from another person’s vein. The limitations of these options include the amount of graft material available, the amount that can be generated, the time needed to create it, and compatibility. 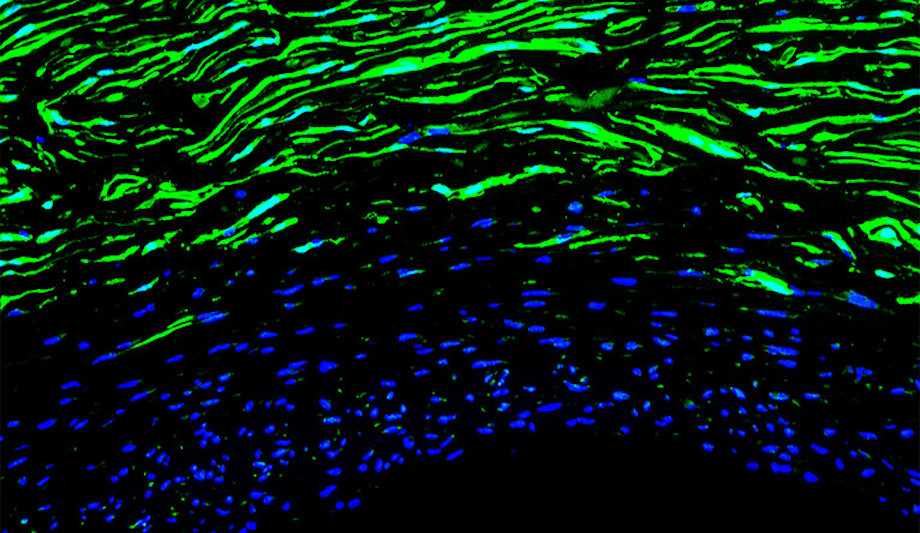 Yale’s discovery uses tissue-engineered vascular grafts (TEVGs) made from human induced pluripotent stem cells (hiPSCs). HiPSCs are stem cells that can be reprogrammed to develop into any type of specific human cells. They come from blood or skin cells, rather than embryonic stem cells.

“They can self-renew and differentiate into virtually every cell type in the human body,” said Yibing Qyang, associate professor of medicine at Yale, director of the Yale Stem Cell Research Forum, and main author of a new study in the journal Cell Stem Cell.

In this case, the hiPSCs develop into vascular smooth muscle cells, which comprise the arterial wall in human blood vessels. The Yale team “seeds” the new cells onto a tubular, biodegradable scaffold inside a bioreactor, where the cells start to grow.

Importantly, during the growth process, the bioreactor sends a pulse into the tissue. This pulse effectively stretches out the tissue, simulating the way blood pulses through a vessel. The researchers said strong, implantable material was ready after eight weeks.

Jiesi Luo, a postdoctoral associate in medicine at Yale and first author of the study, said the optimal rate for the pulses was 120 beats per minute. He also said the team grew 180 million vascular smooth muscle cells from 4.5 million hiPSCs.

“This will address the issues of finite expandability, limited accessibility, and donor-to-donor variability issues seen with other vascular engineering approaches,” he said.

The research builds upon previous work led by Yale’s Laura Niklason, M.D., that created the tubular scaffold. “This is important and exciting because it’s never been done before,” said Niklason, the Nicholas Greene Professor of Anesthesiology and Biomedical Engineering and also a co-author of the new study.

The discovery has further advantages.

The researchers said the universal compatibility of the new procedure may provide an “off-the-shelf” option for people injured in combat or accidents. It also may help patients whose vascular smooth muscle cells are damaged or defective due to age or disease.

Further testing in animal models is needed before clinical trials in humans could begin, the researchers said. They estimated that human trials are 5-10 years away.

“We’ve set the stage for generating blood vessels for patients with arterial disease as well as patients injured in accidents or wars,” Qyang said. “This procedure can be readily scaled up to provide care following vascular injury and could revolutionize the clinical grafting technology field.”

Funding for the research came, in part, from the National Institutes of Health, the Connecticut Regenerative Medicine Research Fund, and the American Heart Association.

Submitted by Elisabeth Reitman on January 17, 2020