When the Bone Breaks, the Cradle Won’t Fall 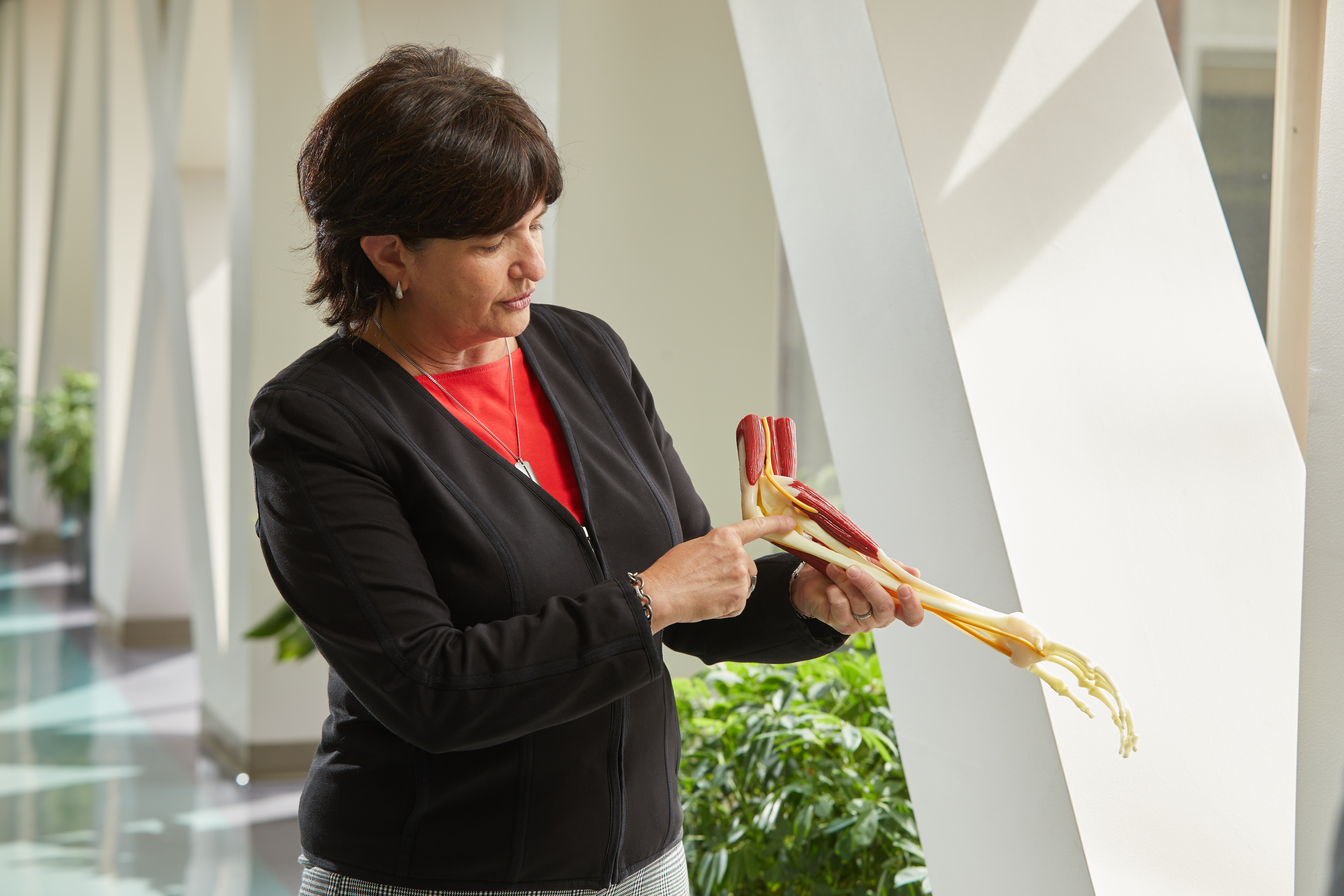 Lisa Lattanza, MD, credits strong mentorship and an unusual career path with her resounding success in the field of orthopaedic surgery. She is excited to bring the lessons she’s learned to the Yale Department of Orthopaedics and Rehabilitation. There are three female chairs of medical school orthopaedics departments in the United States. The most recent, Lisa Lattanza, MD, comes to Yale School of Medicine via the University of California San Francisco.

Your journey to department chair has been unusual. How did growing up lead you to the field of medicine? I come from a family of five kids in rural Ohio. My mother was a teacher and my dad was a school psychologist. I had always thought about a career in medicine but they told me they couldn’t afford medical school. A high school sports injury exposed me to orthopaedic surgery and physical therapy, and the latter seemed like a feasible way to enter the profession, so that’s what I studied in undergrad. I landed a job at the Kerlan-Jobe Orthopaedic Center in Los Angeles, where I treated patients with sports injuries and did research. I also met a prominent orthopaedic surgeon, Jacquelin Perry, MD.

Is that the Perry of your Perry Initiative? That’s right. Perry had an enormous impact on how I viewed the practice of medicine. She would always listen to everyone in the room, regardless of hierarchy. … She encouraged me to attend medical school, and was generally a huge advocate of women in medicine. Being a doctor had always seemed impractical and then I worried that maybe I wasn’t smart enough—I’m old enough to remember being told by an elementary school teacher, “You don’t want to be smarter than the boys.” I didn’t personally know any doctors growing up. And the impact of one encouraging me to pursue that goal, acting as a mentor and role model—that was so important. The Perry Initiative is held in 54 locations nationwide now, offering daylong programs for young women in high school who want to explore opportunities in science, specifically engineering and orthopaedic surgery. We also have a Medical School Outreach Program for first- and second-year female medical students to expose them to the specialty; as an overall field, the national average for women applying and being accepted into an orthopaedics program is 14%. For first- and second-year women who have gone through our program, it’s 26-30%.

Do you view your time as a physical therapist as a distraction, then? Quite the contrary. I wouldn’t be the surgeon I am without that practical whole-person approach that I learned as a physical therapist. Surgeons can fall into the trap of viewing the body mechanistically, like, a part here breaks and you fix it. And while there’s some truth to there being a kind of interchangeability of some parts, they all affect each other, and you really see that with certain injuries that cause a cascade of secondary and tertiary problems. All surgeons don’t need to take the path I did, but I appreciate the road I traveled.

When did you realize you wanted to be an orthopaedic surgeon specifically? The seed was planted at Kerlan-Jobe, a big sports medicine group that took care of the Lakers and Dodgers among other professional athletes. I’d lettered in three sports in high school, played basketball, ran cross country in college, and had a passion for athletic competition. I went back to medical school to become an orthopaedic surgeon. I initially thought during residency that I would pursue sports medicine specialty training but that changed when I did a couple of congenital hand cases with a hand surgeon at the children’s hospital in Kansas City. It blew my mind that you could take a child that was born without a thumb and make them a thumb from an index finger or toe. And, boom, their life was impacted forever in a positive way. Prior to that experience my dream job had been team physician for the Pittsburgh Steelers (my dad had grown up there), but seeing the impact that kind of surgery had versus an ACL reconstruction so that someone could go back to playing a sport. … and now I’m a hand and upper extremity surgeon treating both children and adults. My time at Texas Scottish Rite Hospital for Children in Dallas with Marybeth Ezaki, MD, and Peter Carter, MD, also helped play a role in that decision; I really have been blessed with fantastic mentors.

What are your plans for the department, moving forward? Right now, orthopaedic surgery benefits tremendously from 3D printing for planning—where to cut a bone, how to resolve complicated procedures—this increases the effectiveness of operations and reduces error. In the future, though, it looks like we’re headed toward 3D-printed biomaterials. Printing bones, printing organs, using material grown from a patient’s own cells for transplant. What I would like to see happen on this campus is a 3D surgical center that’s multidisciplinary. … Radiology, general surgery, orthopaedics, maxillofacial, plastic surgery, urology, whoever can benefit from this technology. That will keep Yale at the forefront of surgical innovation and treatment.

Other plans include an expansion of our capabilities regionally and internationally. We can always add to the great job we’ve done supporting the local community’s orthopaedic needs. There are also plans to continue building on existing global partnerships. Those take the shape of clinical growth, and also volunteer projects.

Finally, I hope to keep our departmental eye on the ball when it comes to diversity, equity, and inclusion. A lot of people who grew up thinking they couldn’t make it or ortho wasn’t for them when I was younger have done a good job of opening locked doors. We’re all hoping to see the next generation walk through.