Portrait of Carolyn W. Slayman, PhD, Is Unveiled on the 82nd Anniversary of Her Birth 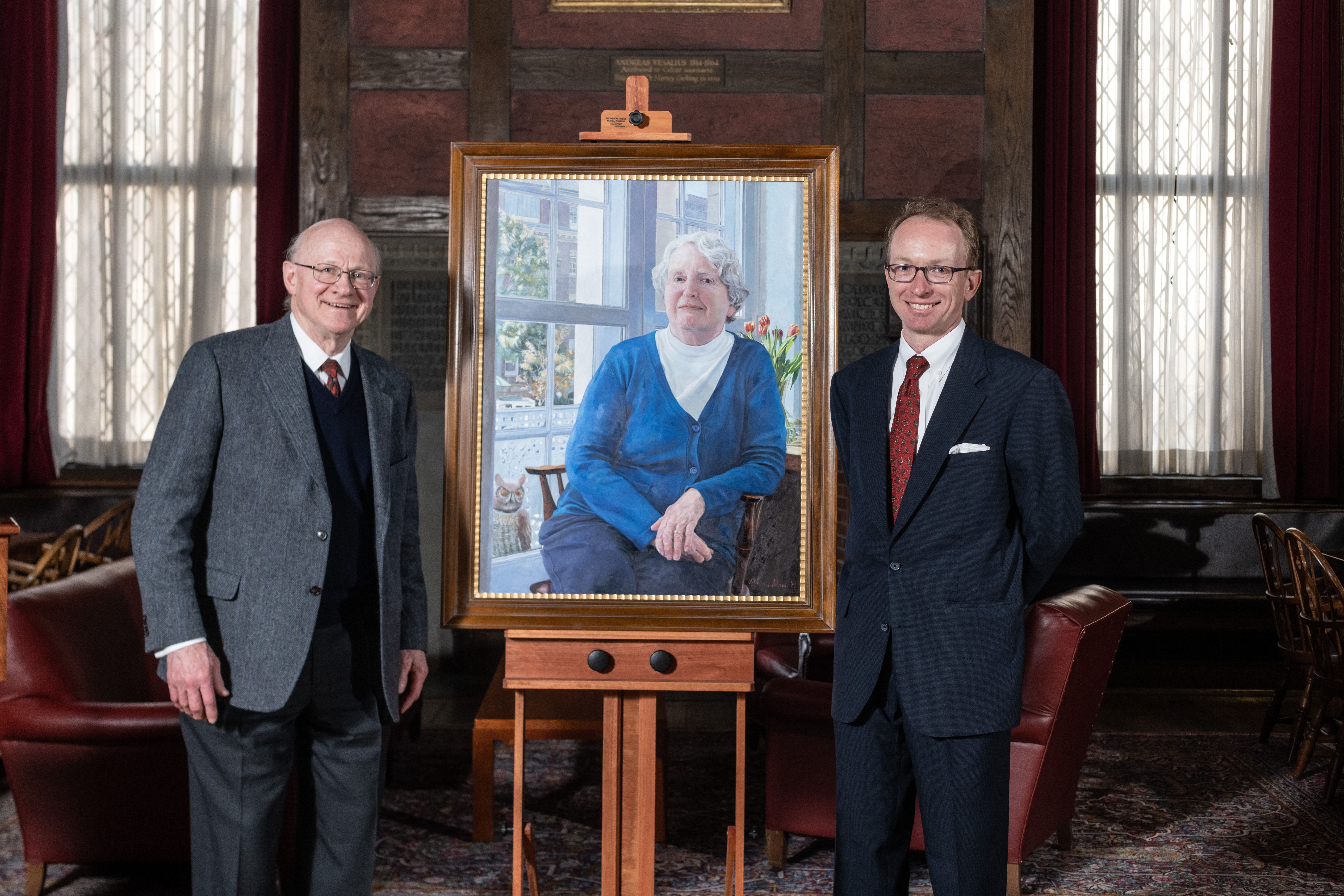 A special gathering in the Medical Historical Library on the afternoon of March 11 reminded all who attended how much Carolyn W. Slayman, PhD, is still missed, more than two years after her death in December 2016. The School of Medicine unveiled a portrait of Slayman, who was deputy dean for academic and scientific affairs, Sterling Professor of Genetics, and professor of cellular and molecular biology, and was a member of the Yale faculty for nearly 50 years as a beloved scientist, administrator, mentor, and confidante. Both tears and reminiscences flowed as colleagues, relatives, and some who had never met Slayman filled the library on what would have been her 82nd birthday.

The school commissioned the portrait from the British painter Alastair Adams, who already had created likenesses for Yale of Chief Investment Officer David Swensen and Dean of Yale College Marvin Chun, and is now painting a portrait of the late Dorothy M. Horstmann, MD, who in 1961 was the first woman appointed by the medical school as a full professor.

Adams built upon a set of photographs of Slayman taken in her office at Sterling Hall of Medicine in 2011 by then-university photographer Terry Dagradi, now Cushing Center Coordinator in the Harvey Cushing/John Hay Whitney Medical Library, as well as interviews Adams conducted with many of Slayman's close colleagues and acquaintances. At the ceremony, Adams noted how unusual it was for him to create a portrait of a person he had never met, and how that in fact made the work a collective effort. "[The portrait] actually surmises time I've spent with all of you and the things you have told me about Carolyn," he noted. "And what we end up with there, I think, is something that is co-designed by the school and using me as a way of purely bringing things together." One product of these discussions is a carved owl on the windowsill, famous to many as having been placed there by Slayman to ward off pigeons that frequently visited.

Robert J. Alpern, MD, dean and Ensign Professor of Medicine, saluted Slayman as the person at the school who, when he arrived 15 years ago, knew its history and workings better than anyone, noting that "any time anyone wanted to know something about the medical school you went to Carolyn."

Slayman's husband of 57 years, Clifford L. Slayman, PhD, emeritus professor of cellular and molecular physiology, took special delight in how well the portrait highlights one of his wife's familiar traits. "Those of you who knew Carolyn well saw in her an imp. And one of the [photographs] that the kids and I liked best, was her with an expression of impishness. We asked Alastair to capture that if he could and I think he did a very good job." Slayman also paid warm tribute to his wife's work at the medical school. "She tried to make this the best place she could, the best medical school she could. She did that, as several of you have told me, without injecting her own ego. She did it for us."

The permanent home for the Carolyn Slayman portrait is still to be determined, as part of a larger effort to place artwork of honored figures in appropriate locations at the medical school. It now can be seen on the second floor of the Sterling Hall of Medicine, in Aperture, an exhibit of photographic portraits of women faculty in medicine on display through January 2020, in the corridor between the Office of the Dean and the Beaumont Room. Many of these portraits were created in connection with the 100 Years of Women at YSM celebration last spring. Photographer Robert A. Lisak, MFA ’81, presented the School of Medicine with a gift of archival prints of these portraits. This collection will be augmented with additional portraits throughout its duration. The exhibit also supports Yale University’s celebration of the 50th anniversary of coeducation in Yale College and the 150th anniversary of women students at the university.