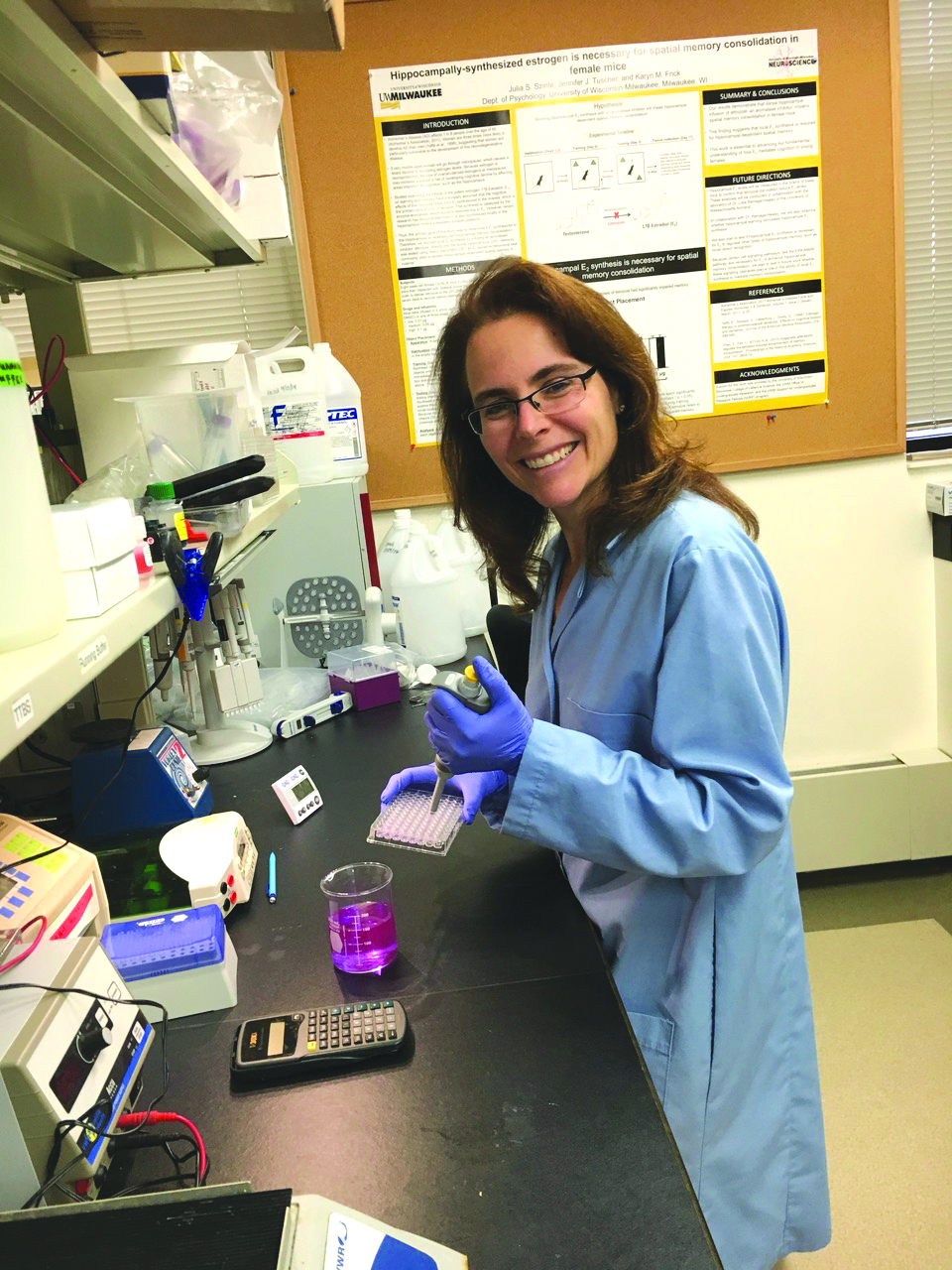 Her two-year study, begun with funding from Women’s Health Research at Yale in 2005, found that long-term treatment with the sex hormones estrogen and progesterone did not improve memory as anticipated.

“It was surprising, because we thought for sure we’d see a benefit of at least some of our treatments,” said Frick, now a Professor of Psychology at the University of Wisconsin-Milwaukee.

So Frick and her colleagues pivoted from longer hormone treatment regimens to a single treatment with estradiol, the most biologically active form of estrogen, to allow the researchers to better isolate the neural mechanisms behind memory formation.

“Those original null findings actually set us on the path we’ve followed for the past decade,” Frick said of her work with animal models. “We’re still using the single treatment directly targeting the brain. And we’ve been quite successful in identifying specific signaling events, receptors, and cellular processes that are necessary for estradiol to help form a memory.”

Of the 5.3 million Americans age 65 and older with Alzheimer’s disease, almost 2/3 are women. And even though women tend to live longer than men, longevity alone can’t account for the greater likelihood of women developing Alzheimer’s and other dementias. For example, Alzheimer’s disease starts to develop as long as two decades before it can be diagnosed. And studies have shown that women with a particular gene variant are twice as likely to develop Alzheimer’s disease as women without the variant, while the gene has only a slight effect on increasing men’s risk for the memory-destroying disease.

This sex difference in the risk of Alzheimer’s disease has motivated Frick’s work identifying the molecular mechanisms through which sex hormones regulate memory formation, a topic she recently presented in Montreal at the annual meeting of the Organization for the Study of Sex Differences.

Frick and other researchers believe that the decrease in estrogens following menopause might explain what’s happening. Nerve cells in cognitive regions of the brain that are earliest affected by Alzheimer’s disease depend on estrogens for proper functioning. The precipitous loss of estrogens at menopause leaves these cells more vulnerable to the detrimental effects of the disease. Although estrogen treatment can reverse cognitive impairment in animal models of aging and dementia, its effectiveness in women isn’t clear and carries risks of side effects.

“We need to find out how estrogens work to regulate memory in the first place,” Frick said. “Because you can’t design better treatments if you don’t know how something works. Understanding the molecular events in the brain that estradiol uses to facilitate memory formation might be the key we need to unlock the therapeutic potential of estrogens for dementia.”

Frick’s WHRY-funded study sought to investigate an unexpected finding from the Women’s Health Initiative Memory Study (WHIMS), a randomized, double-blind, placebo-controlled clinical trial of 7,510 women to determine the ability of the sex hormones estrogen and progesterone to prevent cognitive impairment when administered an average of 10 years after menopause. Despite previous studies in women and animal models demonstrating the ability of hormone therapy to reduce age-related memory loss, the WHIMS researchers found that treatment with estrogens, with or without a synthetic form of progesterone, significantly increased the risk of cognitive decline and dementia in post-menopausal women over the age of 65.

Frick explored whether her team could tweak the WHIMS design to show memory improvement in an animal model by administering estradiol to simulate the natural menstrual cycle and by using natural progesterone, as opposed to the synthetic form used in the WHIMS.

Surprisingly, neither therapy improved memory and, in several instances, impaired memory in middle-aged and aged subjects. But for motivated scientists, seeming setbacks only serve to help fill out the big picture and push progress.
Using a mouse model, Frick’s team began to administer a single dose of estradiol directed at the brain’s hippocampus, an important site in which short-term spatial, contextual, and object memories consolidate
into long-term memories. They found that if they administered estradiol directly into the hippocampus within three hours of exploring an object, they enhanced the ability of their female subjects to later remember the identity and location of that object.

This effect proved more rapid than the previous understanding of how sex hormones classically affect cellular functioning, which requires hours or days for the hormone to diffuse into the cell, bind to receptors, move into the cell nucleus, bind to a specific part of the cell’s DNA, and lead to the process in which inherited traits encoded in DNA are transcribed to carry out their designed functions.

“The kinds of biochemical mechanisms we’ve been examining in the past decade are rapid, or non-classical, effects,” Frick said. “We know that these rapid biochemical events are responsible for the memory-enhancing effects of estradiol because if we block them from happening, we prevent the formation of memories.”

Frick, who was recruited to the University of Wisconsin-Milwaukee in 2010, turned her attention to a process called local protein synthesis, in which estradiol in females increases the spiny projections of the information receiving, branched ends of nerve cells called dendrites. The more dendritic spines, the more contacts the nerve cells can make with other nerve cells, increasing plasticity — the brain’s ability to change its physical structure and potentially increase cognitive function.

“But in order to make new cellular structures like spines, you need proteins,” Frick said. “You can generate proteins by increasing activity in the cell’s nucleus, but estradiol increases spines pretty quickly — as early as 30 minutes after treatment. That’s too fast to be a nuclear effect, so it’s likely due to local protein synthesis within dendrites. All the machinery to make the proteins that build new spines is present locally in the dendrites, and so spines can be made without going through the nucleus.” 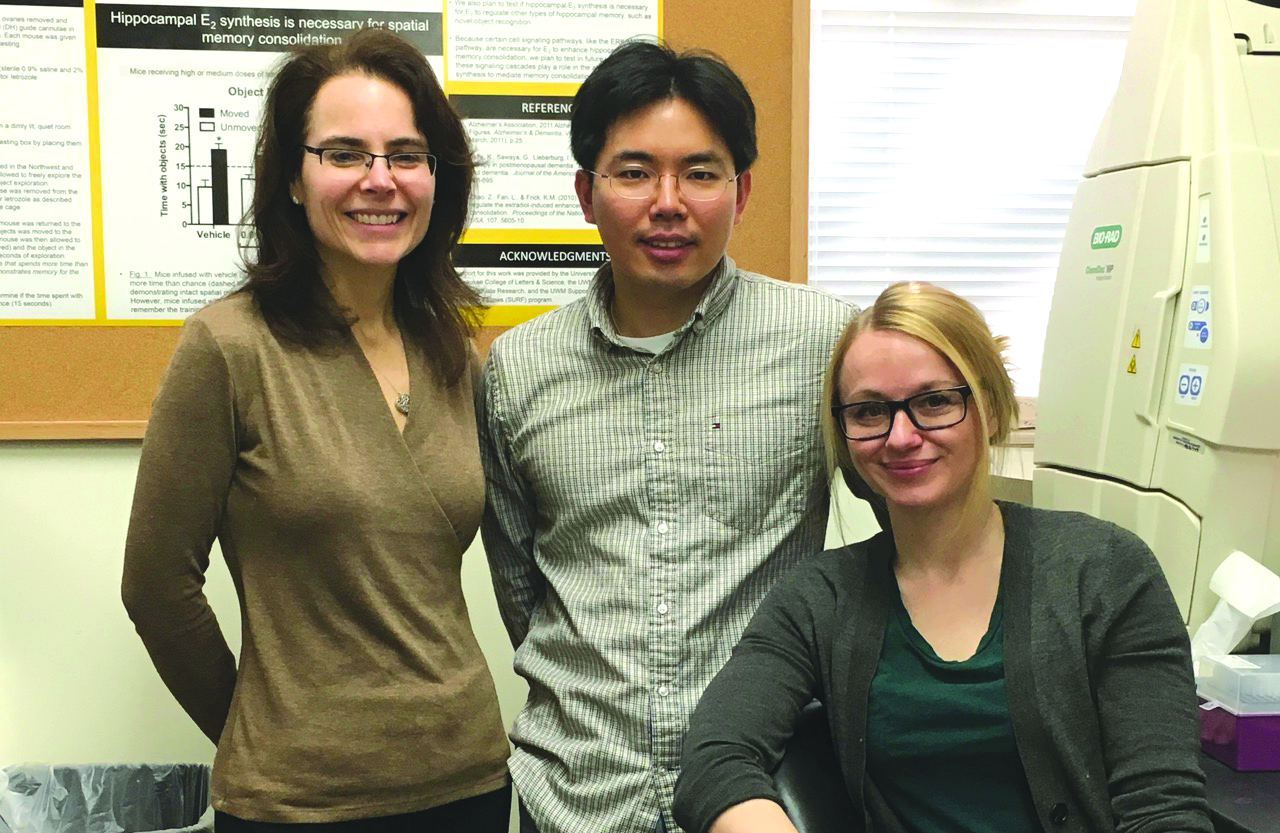 To understand how estradiol promotes the formation of spines, Frick focuses on a form of chemical chain reaction called cell signaling. Cell-signaling pathways consist of proteins called enzymes that activate the next enzyme in the chain after their own activation. Within dendrites, two cell-signaling pathways in particular are essential for estradiol to enhance memory and increase dendritic spines.

Frick and her team have shown that when the activation of these pathways, called ERK and mTOR for short, is blocked, estradiol can no longer enhance memory or increase spines in the hippocampus of females. The mTOR pathway triggers local protein synthesis, and so the group’s findings demonstrate that estradiol may enhance memory by rapidly activating cell signaling, which then increases protein synthesis, spine density, and synaptic plasticity.
Frick’s successes with the ERK and mTOR pathways have led her team to examine other cell-signaling pathways related to ERK and mTOR to determine other possible molecules that estradiol might use to influence memory formation.

“We want to understand how estradiol affects memory on a molecular level,” Frick said. “If we can figure that out, then we can identify potential targets for future drug development.”

Ultimately, Frick hopes that researchers can develop a treatment that acts directly on the nerve cell’s estrogen receptors without having to use estrogen therapy, reducing the risk of possible side effects.

At the time she received her WHRY grant, Frick was an assistant professor who had not yet had a major grant from the National Institutes of Health like one she is using now to advance this work.

“Having an organization like WHRY supporting junior investigators to get their research off the ground is really fantastic,” she said. “It was very instrumental in helping me succeed.”

And she expressed her appreciation for WHRY’s ability to not just grow vital science, but professional science careers.

“Our WHRY funding not only benefitted me, but also each of my students who worked on the project,” Frick said. “These graduate and undergraduate students are the primary investigators of tomorrow, so WHRY’s support will be perpetuated well into the future.”