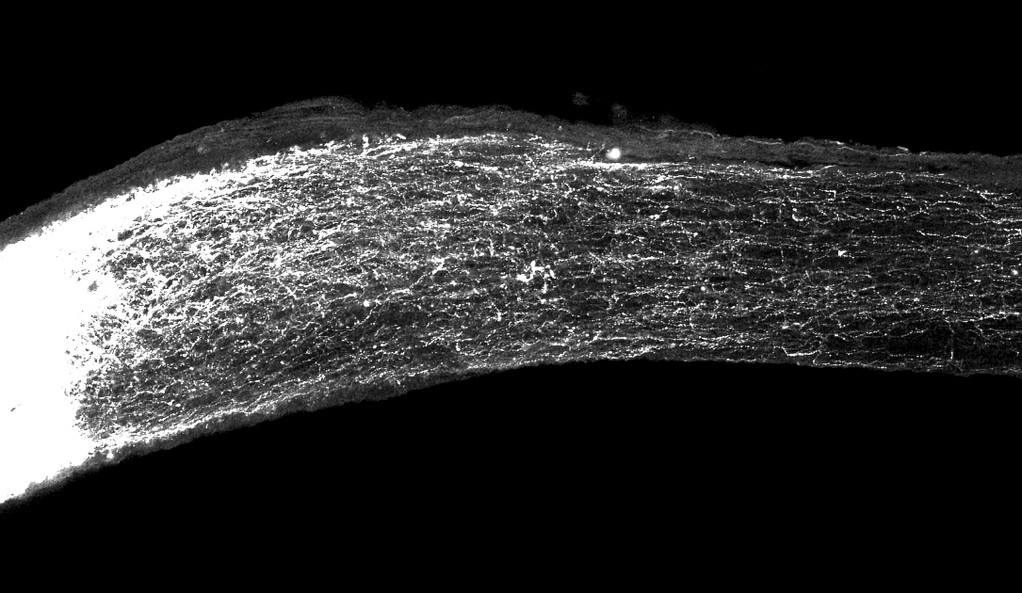 Searching the entire genome, a Yale research team has identified a gene that when eliminated can spur regeneration of axons in nerve cells severed by spinal cord injury.

“For the first time, the limits on nerve fiber regeneration were studied in an unbiased way across nearly all genes,” said Stephen Strittmatter, the Vincent Coates Professor of Neurology and senior author of the study appearing April 10 in the journal Cell Reports. “We had no idea whether we knew a lot or a little about the mechanics of nerve cell regeneration.”

The Yale team found more than 580 different genes that may play a role in regeneration of axons in nerve cells, something that rarely occurs in adult mammals but is of vital interest to scientists hoping to repair injuries to the central nervous system. Intriguingly, said the researchers, about one in 10 of those came from a family of genes involved in transport of information within cells. The researchers also reported that eliminating one of those genes, Rab27, led to regeneration of axons in the optic nerve or spinal cord of mice.

“We only looked at this one gene, and we have hundreds more to investigate,” Strittmatter said. “It is not hard to envision an approach where you can knock down two or three of these pathways and help spur regeneration further than achieved previously.”

The work was primarily funded by the National Institutes of Health.

Yale’s Yuichi Sekine is lead author of the paper.

Submitted by Lindsay Borthwick on April 16, 2018