A dendrodendritic microcircuit for lateral inhibition and gamma to beta oscillation

An early electrophysiological study with Charles Phillips and Tom Powell of the olfactory bulb postulated that long-lasting inhibition of mitral (M) cells is due to the granule (G) cell acting as an interneuron (Shepherd, 1963). The first computer models of brain neurons with Wilfrid Rall predicted that the inhibition is mediated by unprecedented dendrodendritic interactions between mitral and granule cells (Rall and Shepherd, 1968), which subserve both lateral inhibition and oscillatory activity underlying olfactory processing. The prediction was supported by electronmicroscpic evidence for dendrodendritic synapses between the cells (Rall et al, 1966). This collaboration is fully explained in the Rall Archive (see below). In the intervening 50 years multiple studies have supported this model (Shepherd et al, 2021). The illustration from the study of Xiong and Chen (2002) shows propagating impulses in the lateral dendrites of mitral cells, which enable the lateral inhibition to process the patterns of odor activation widely throughout the olfactory bulb. Current studies are giving a deeper understanding of the central role that mitral-granule inhibition plays in olfactory processing underlying odor perception. 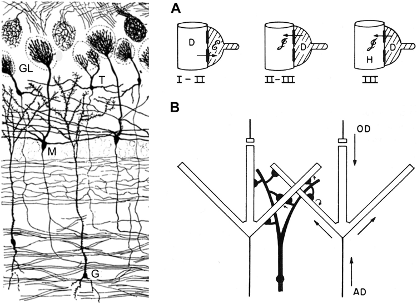 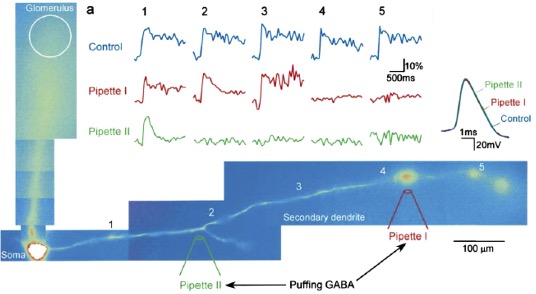