Astronomy was born when early scientists peered into the sky with their naked eyes and recorded what they could see above them. Then, the invention of the telescope brought forth new insights. And today, astronomers conduct their studies from big observatories and launch sophisticated telescopes into space for a much more in-depth look.

Now, a similar evolution is occurring in biology as scientists develop new techniques for taking a closer look at cells—the basic living units of organs. The origins of cell biology date back to 1665 when Robert Hooke was the first to look at a cell under a simple compound microscope. But while the development of more powerful microscopes such as the scanning electron microscope has allowed scientists to take a peek at molecules smaller than a billionth of a meter, until recently they have never had the ability to look at the molecular profile of a single cell.

Our organs are composed of communities of different cell types that communicate with each other to maintain their proper function. But the ability of researchers to classify these cells has until recently fallen short due to resolution limitations of the tools they have available. Now, Yale researchers across disciplines are using single cell technologies to profile various kinds of cells that exist together in both healthy and diseased organs and create the most detailed blueprints of diseases to date, as well as to better understand how various cells develop over time and interact with one another. Through creating these “cell atlases” of organs throughout the body, they hope to shed light on the mechanisms of a wide variety of diseases and biological development.

“This technique is having a transformative impact in biology because it overcomes the main limitation of cell biology studies in tissues—dealing with mixed cell populations,” says Pietro De Camilli, MD, John Klingenstein Professor of Neuroscience and professor of cell biology.

“These cell atlases provide a sort of view of disease that never existed before in which we can understand literally what is wrong in every cell in the diseased organ,” says Naftali Kaminski, MD, Boehringer Ingelheim Pharmaceuticals, Inc. Professor of Medicine (Pulmonary) and section chief of pulmonary, critical care, and sleep medicine.

Generating a map of the human lung

The way science currently classifies cells, says Kaminski, is similar to assuming that everyone in a hospital who wears a white coat is a doctor. This is vastly oversimplified—not only are there are many different kinds of doctors, but also students, residents, nurses, researchers, and other health care workers.

Kaminski’s lab studies human lung diseases. Early in his career, he was the first to provide a profile of all the genes expressed in human lungs of patients suffering from pulmonary fibrosis. This profile was informative and led to the discovery of novel biomarkers and mechanisms of disease, but was limited because investigators could not distinguish whether the changes were due to changes in cell type or changes of gene expression. Now, using single cell gene profiling technologies, Kaminski, and other investigators in Yale’s Section of Pulmonary, Critical Care & Sleep Medicine (Yale-PCCSM) are profiling all the cells in samples from patients with advanced lung disease, such as idiopathic pulmonary fibrosis (IPF) and chronic obstructive pulmonary disease (COPD). They discovered novel cell types, changes in the profiles of known cells, and also shed light on interactions among different cell types.

“It is very rare that you see something completely new in science,“ says Kaminski. “We were not only able to identify all the cell types in the lung and how they change in disease, but in IPF identified cell populations that were previously not recognized."

The dramatic findings are not limited to IPF. Kaminski noted that when Maor Sauler, MD, assistant professor of medicine (pulmonary), and John McDonough, PhD, instructor of medicine in Yale-PCCSM, analyzed the lungs of COPD, they found previously unknown mechanisms in the cells that line the alveoli. The therapeutic applications of this, says Kaminski, “are dramatic.”

“We suddenly found cells that don’t obey the regular rules, and we can now target these cells through a much more specific approach,” he says. “If you can understand what are the bad cells and how the signaling between the cells changes, in theory it should be possible to not only stop these diseases, but actually cure them.”

Single cell data is transformative but also not very accessible, even when public, because it requires advanced computational methods. Kaminski and his team therefore provide data sharing and dissemination portals that allow free exploration of the data. “When I looked at the data, I said that we have to democratize it, so we developed web portals that allow researchers free access to the data, even if they are not experts in bioinformatics." The different cell atlases can be found at Yale School of Medicine’s Pulmonary, Critical Care & Sleep Medicine’s web page. 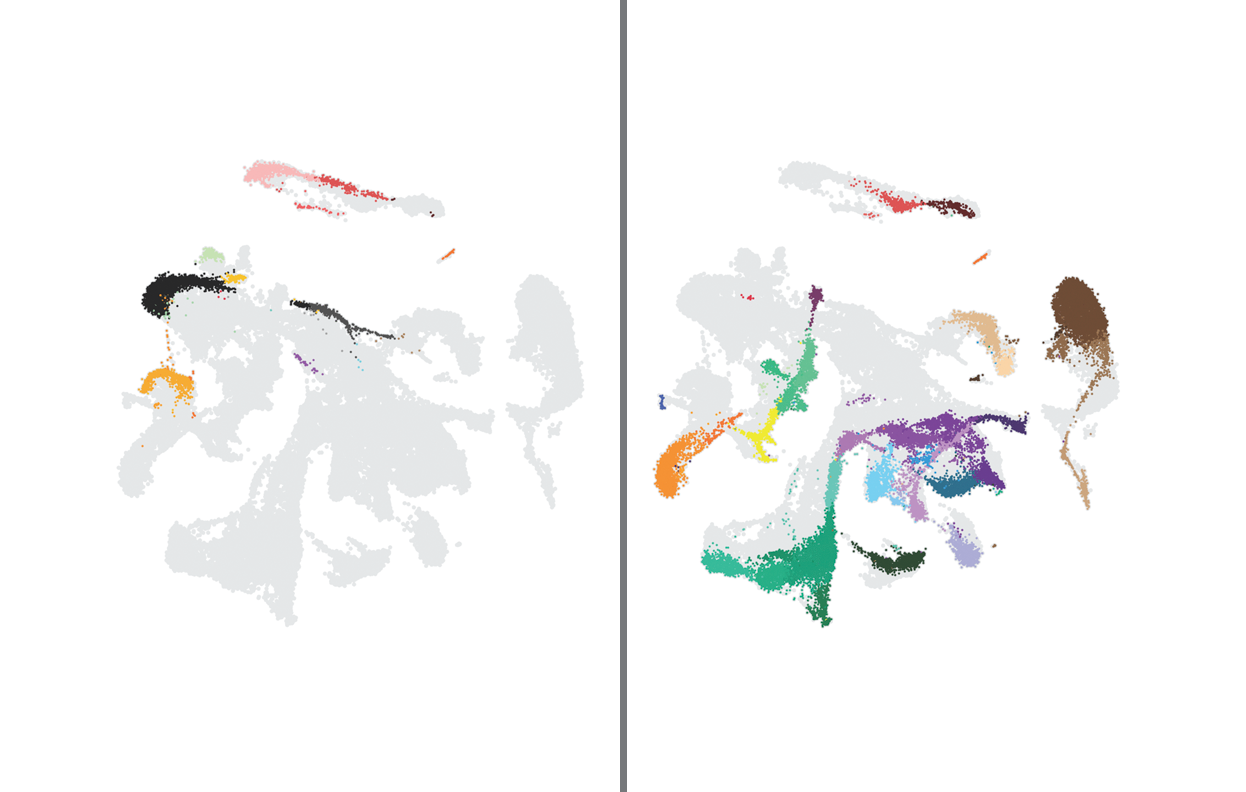 Single cell technologies are also helping researchers take a unique look at the development of embryos. Zachary Smith, PhD, assistant professor of genetics, studies epigenetic regulation in early embryonic development. His lab looks at how the environment can change the structure of embryos very early on, and how these changes may lead to detrimental long-term effects such as miscarriages and other adverse pregnancy outcomes.

Smith’s goal is to understand the molecular triggers that lead normal developmental processes to go awry. To do this, he studies a process called gastrulation—an early stage in the embryonic development process in which the embryo undergoes substantial reorganization—using single cell approaches. The time intervals his lab studies are very short—before gastrulation, mouse embryos are very simple, but within about two days they grow to include dozens of different cell types. Because this change in structure occurs so rapidly, it’s been difficult for researchers to identify when or how things can go wrong. Single cell technologies provide an unprecedented opportunity to investigate this early developmental window in a way that can give scientists new insights for therapies or diagnostics.

“At the moment, we only have very simple guideposts as to what’s going on in embryonic development,” says Smith. “It’s very difficult to understand how various genes are related to the specific details of mammalian and human development, but these tools are giving us a chance to understand what aspects of the early stages of development stay with us for the rest of our lives.”

Brian Hafler, MD, PhD, assistant professor of ophthalmology & visual science and of pathology, studies eye disease with a focus on age-related macular degeneration. There is an unmet medical need for therapies for patients suffering from vision loss and irreversible blindness. Cell atlases, he says, are a “little bit like a dictionary.” Using single cell technology, Hafler can profile all of the different RNA molecules in each individual cell of the retina. He hopes to use this research to identify the role of neuroinflammation and key pathways that may help prevent vision loss.

“Cutting-edge single cell technologies and creating cell atlases provide an unparalleled opportunity to identify cellular drivers of eye disease, key inflammatory pathways, and therapies that improve the quality of lives of patients suffering from conditions like macular degeneration or glaucoma,” says Hafler. “This is helping lead to medical scientific breakthroughs that move the field forward.”

At the Cardiovascular Research Center, John Hwa, MD, PhD, professor of medicine (cardiology), has focused on platelet research over the past decade. Platelets were traditionally believed to be a homogenous group of cells that only played a role in blood clotting, but now, Hwa is studying their role in a wide range of processes. This is made possible in part through single cell analysis, which has revealed that platelets are much more varied than previously thought.

“The heart is a single organ composed of lots of different cells that can potentially serve individual and interesting roles,” says Hwa. “Single cell analysis is all about getting a massive amount of data from a single cell in one swoop.”

These technologies are helping Hwa figure out what’s going on in both healthy and diseased blood cells. Through his research, he hopes to learn how to target platelets that help fight the spread and growth of cancer, how the aging process changes platelets over time, and more. “I never, ever thought that I’d be so interested and passionate about platelets as I am now,” says Hwa.

Most pediatric cell atlases are divided into four different developmental groups from infancy through adulthood. These groups represent important stages of tissue development where major changes in the body often happen. Major muscle diseases, among many other conditions, often start appearing during these stages. “We can use single cell analysis to better understand how human muscle develops on the cellular level, as well as how human disease develops,” says Lek.

Lek uses single cell analysis to learn more about different cell types in muscle tissue and how they are spatially related in terms of gene expression patterns. His lab is also committed to diversity and including non-European samples for each of the age groups. “This is the human cell atlas, not the European cell atlas,” says Lek. “We want to make sure what we observe in easily accessible European tissues holds true across racial groups.”

The use of single cell technologies is widespread across disciplines. Faculty in the departments of Cell Biology and of Neuroscience, for example, have begun conducting research to better understand the different cell types and functional states in our most complex organ, the brain, as well as to study neurodegenerative diseases such as Parkinson’s. Other advanced research at Yale involving single cell analysis includes uncovering sex-specific differences in Alzheimer’s disease and understanding immune responses in severe COVID-19 patients.