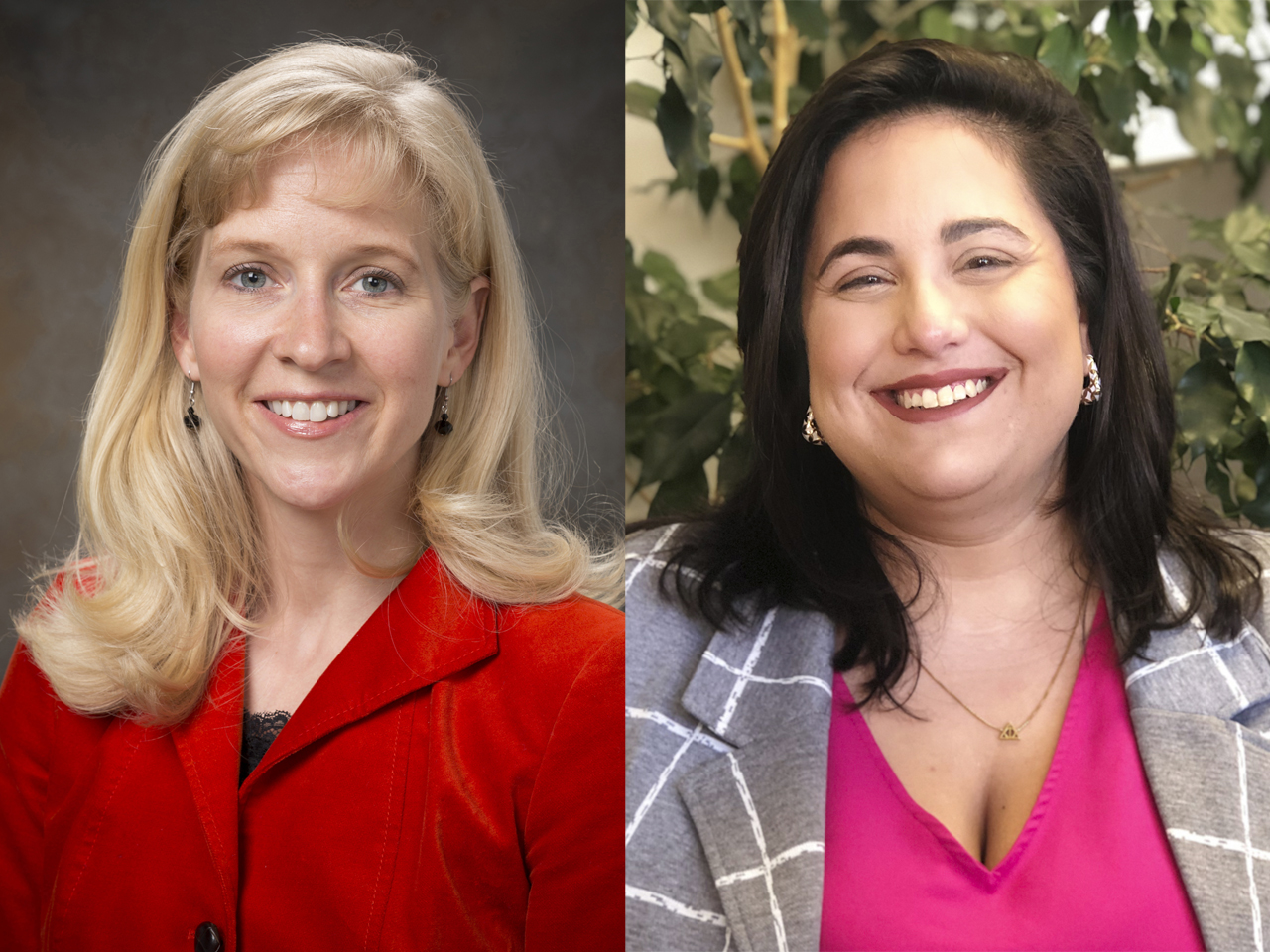 The awards, given on an annual basis, acknowledges and honors the outstanding attributes of two department staff whose work and behaviors support and promote the goals, values, and mission of the department. Nominations were received and two individuals were identified by selection committee.

“Mary and Alyssa represent the best of the best within the department,” said Mark Holter, CMPE, CPA, vice chair, Finance & Administration. “This year, the selection committee received 20 nominations across the department and they had a tough decision to make. The nominees represented an assorted mixture of both positions and length of service within the department. Ultimately, the committee selected two individuals that I am truly honored to say reflect the essence of this award.”

Geda was shocked to win the prize. “I had no idea,” said Geda. “When Dr. Desir made the announcement, it was just extremely humbling and complementary, because I know how hard it is to get those awards and the type of work that is involved to be nominated. The people nominating you obviously care an awful lot because it is a lot of work to compile all the information they ask for. So that was wonderful.”

Since coming to Yale School of Medicine in 2008, Geda worked in the Sections of Cardiovascular Medicine, and General Medicine before landing in her current role in Geriatrics. Nominated by Mary Tinetti, MD; Thomas Gill, MD; Terri Fried, MD; and Denise Acampora, MPH; Mary’s organization skills, mentorship, and training were highlighted. “Mary has the remarkable ability to understand issues from multiple perspectives and to communicate effectively so that others are able to do this as well. Those who work with her are given the gift of confidence that the work will get done, problems will be solved and the environment will always be one of enthusiasm and cooperation,” they wrote in their nomination letter.

Carboni was also surprised to be recognized. “I was really honored and I was shocked too. I have been managing faculty financials, which I could easily be giving them a very good news or very bad news. So it really means a lot that they not only respect what I do, but took the time to go above and beyond and nominate me for the award,” she said.

Carboni started with the department in 2017. Her nominators, Stefan Somlo, MD; Lloyd Cantley, MD; and Richard Bucala, MD, PhD; noted Carboni’s positive attitude, attention to detail, and communications skills. In their nomination, they wrote that Carboni, “single-handedly resolved a two-year impasse between one investigator and the sub-award grant oversight team at a different institution, resulting in the award of the funds to our investigator. Achieving this took over six months of her continuing efforts, independent of our investigator, to contact their subaward team and steadily move the request through their system.”

The Service Excellence Awards were created in 2016 as a way to honor department staff on their excellence in the following pillars: understands the organization, demonstrates personal motivation, customer service and communication, university citizen/leadership, and teamwork. Previous winners include Laura Whitley, Laura Crawford, Lynn Gambardella, and Tracy Crosby.

The Department of Internal Medicine at Yale is among the nation's premier departments, bringing together an elite cadre of clinicians, investigators, and educators in one of the world's top medical schools. To learn more, visit Internal Medicine.