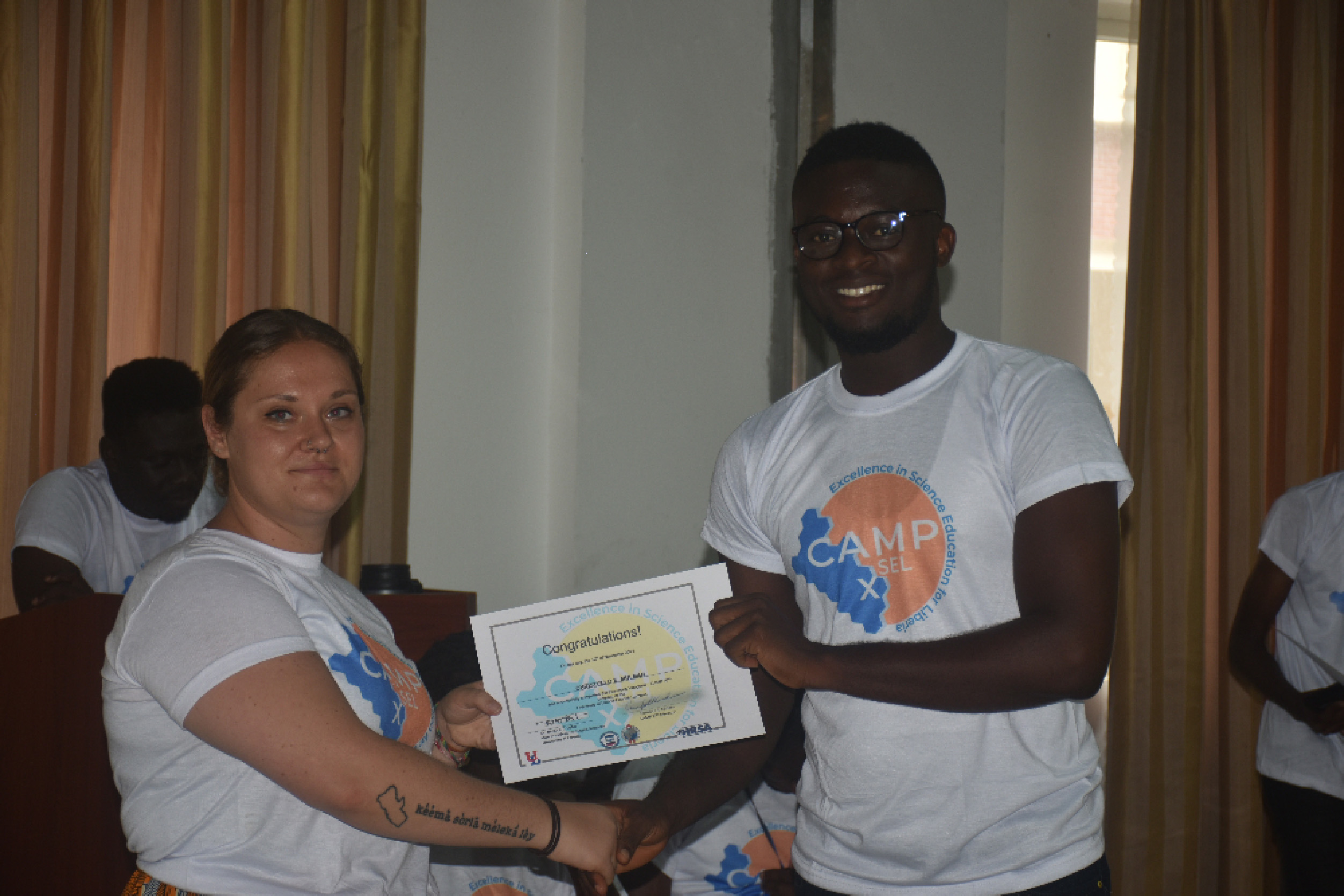 Yale University received a $15 million, five-year U.S. Agency for International Development (USAID) award to advance the use of research in Liberia’s health sector. The funded project, BRIDGE-U: Applying Research for a Healthy Liberia, will establish a Center for Teaching, Learning, and Innovation at ULCHS and strengthen health sciences education across the country.

Kristina Talbert-Slagle, PhD, assistant professor, (general internal medicine), at Yale School of Medicine, and principal investigator of BRIDGE-U, said the project is the culmination of many years of collaborative efforts with the Liberian Ministry of Health and University of Liberia. Talbert-Slagle is also the associate director of the Yale Institute for Global Health and a core faculty member of the Yale Equity Research and Innovation Center.

Camp xSEL is part of the USAID-funded BRIDGE-U: Applying Research for a Healthy Liberia project and was planned with support from the PEPFAR-funded Resilient and Responsive Health Systems Liberia project.

The closing program for the four-week intensive took place on November 12, 2021 at the University of Liberia, just outside the capital city of Monrovia. 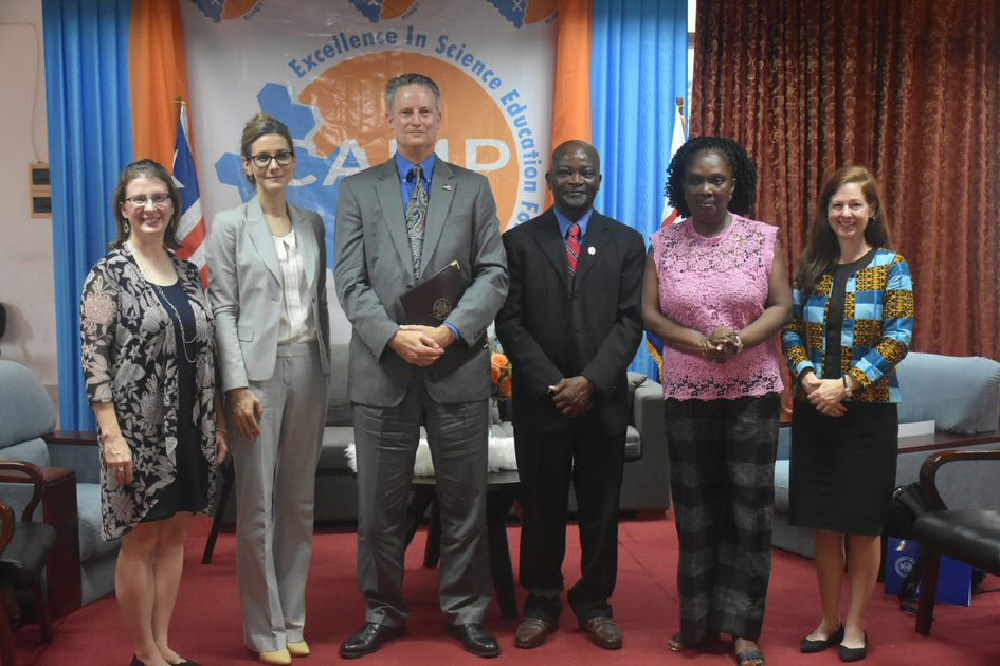 McCarthy and representatives from partner institutions committed to continuous partnership and collaboration to ensure a brighter future for the next generation of Liberia’s medical health professionals.

"Today is an especially proud moment as we stand at the intersection of several different partnerships between the United States and Liberia," McCarthy said. "We are in the business of building a future together. That is why I am so excited by this joint event." McCarthy further described the partnership between the University of Liberia, USAID, and the American Embassy as laudable, expressing optimism that it would continue to flourish.

Zinnah spoke passionately about Camp xSEL and its revised curriculum. He stressed that the support of the U.S. Government has helped to actualize the University of Liberia’s vision by attracting young people to the sciences, particularly the medical field. "To launch this innovative, demand-driven curriculum which demystifies health care assures young people that they can be medical doctors," Zinnah noted.

Reaffirming the university's commitment to faculty development, Zinnah informed the audience that a curriculum is only as good as a good faculty. He assured the University of Liberia medical school of the support of the Office of Academic Affairs for the full implementation of the revised curriculum.

Martin, Vanderbilt University’s principal investigator, commended the collaboration among the different institutions and the U.S. Embassy, which led to the successful implementation of Camp xSEL. Prof. Martin told the campers that she also attended a similar camp when she was their age, leaving her with life-changing experiences that helped her during her academic sojourn.

Talbert-Slagle encouraged students to stand firm in the pursuit of their goals. "I also had a camp experience that changed the course of my life as a young person and inspired me to achieve my goals. Now we believe that you can do the same, and pave the way for others coming behind you," she said.

Dahn affirmed that the numerous challenges students faced in completing a nine-year medical program informed the design of the new curriculum for the Medical School at the University of Liberia. "Now changing from a nine-year training program to a seven-year training program, we knew it was going to be a challenge, knowing that our basic sciences from high school [were] also a challenge," she said while explaining the rationale of camp xSEL.

Four students representing the pre-medical and pre-clinical sections of the camp spoke on behalf of the class. They thanked all the partners and donors who ensured that Camp xSEL program was successful.

Jesse Quoiquoi, acting prefect of the Pre-Med Student Council Section A Camp, expressed appreciation to the founders, donors, coordinators, counselors, and teachers for carrying him and his fellow students through the essential camp xSEL program.

"It was such a great opportunity for us to come to Camp xSEL. Some of us will enter the school of medicine; others might [enter] later on, [or] change their mind. But what is sure is that our stay here for the past four weeks at Camp xSEL has greatly transformed our lives, and the skills and knowledge we have gathered here will go with us for the rest of our lives, and for this, we will remain grateful," he added.

President of the Pre-Med Program Section B Camp, Tonita Printer, expressed gratitude to God for guiding her and her colleagues throughout the camp. "Usually, when we achieve in life, it's not because of our strength, but because others have helped us in the process," she said.

Printer thanked everyone who contributed to making Camp xSEL successful and expressed excitement for the opportunity she had to associate with other young people who look at human development beyond paper and pencil education. "It is heartwarming to see great personalities supporting young people, especially in this time, and we are extremely grateful for that. Camp xSEL was a great place, it was amazing, and we appreciate the fact that you guys made it [work]; it was productive, and it was [educational]," Printer said. She told the audience that their Camp xSEL experiences had prepared campers for their academic journey.

Cordelia K. Capehart, president for Pre-Clinical Section C Camp, said the day of the closing program was historical because it was their first experience with Camp xSEL. It was also memorable because "….just within a month's time, we acquired amazing skills and great knowledge and rebuilt solid relationship that will hereafter bind most of us together for a very long time."

On behalf of her colleagues, Capehart extended sincere appreciation to the planners of Camp xSEL, saying they have done a good thing for the students. "These experiences we gained here at Camp xSEL will no doubt guide us [in] our sojourn to becoming medical doctors," Capehart assured.

For his part, Benjamin Bedell, Jr., president of the Pre-Clinical Section D Camp, said Camp xSEL 2021 was a success because it allows students to get acquainted with each other. He further said the camp opened their minds to concepts they had forgotten, especially problem-solving and critical thinking skills. Bedell said he was also grateful that Camp xSEL had connected students to different people who may be essential in their medical careers.

During the camp, pre-clinical students could sit for math, chemistry, anatomy and physiology, cellular and molecular biology, and English. There was a weekly lab section for both the pre-medical and pre-clinical students. They were given the opportunity to have a discussion section and review scientific journals. During weekends, students participated in workshops on public health and sexual and reproductive health. Upon completing the intensive science and math camp in the four weeks, students are better prepared to enter the A.M. Dogliotti School of Medicine at the University of Liberia.

The program is expected to bring secondary students to partake in Camp xSEL during academic vacation time in Liberia in future years.