In Syria, the world’s shame

When Jennifer Leaning, M.D., S.M.H., spoke on the war in Syria at internal medicine grand rounds on March 30, she could have had no idea that within a week a chemical attack against civilians there would provoke an international crisis. In response to that attack, which killed more than 70 people, President Donald Trump ordered a missile bombardment of a Syrian air base. Syria, he said, had crossed “many, many lines.”

Leaning, the keynote speaker at the Department of Internal Medicine’s 7th Annual Global Health Day, is an expert on the intersection of global health and international law in response to war and disaster. She is the director of the François-Xavier Bagnoud Center for Health and Human Rights at Harvard, and her research and advocacy have taken her to conflict zones in such countries as Afghanistan, Albania, Angola, Kosovo, the Middle East, and Somalia. The title of her talk said it all—“The War in Syria, the World’s Shame: Failures of Early Warning, Humanitarian Protection and Humanitarian Response.” 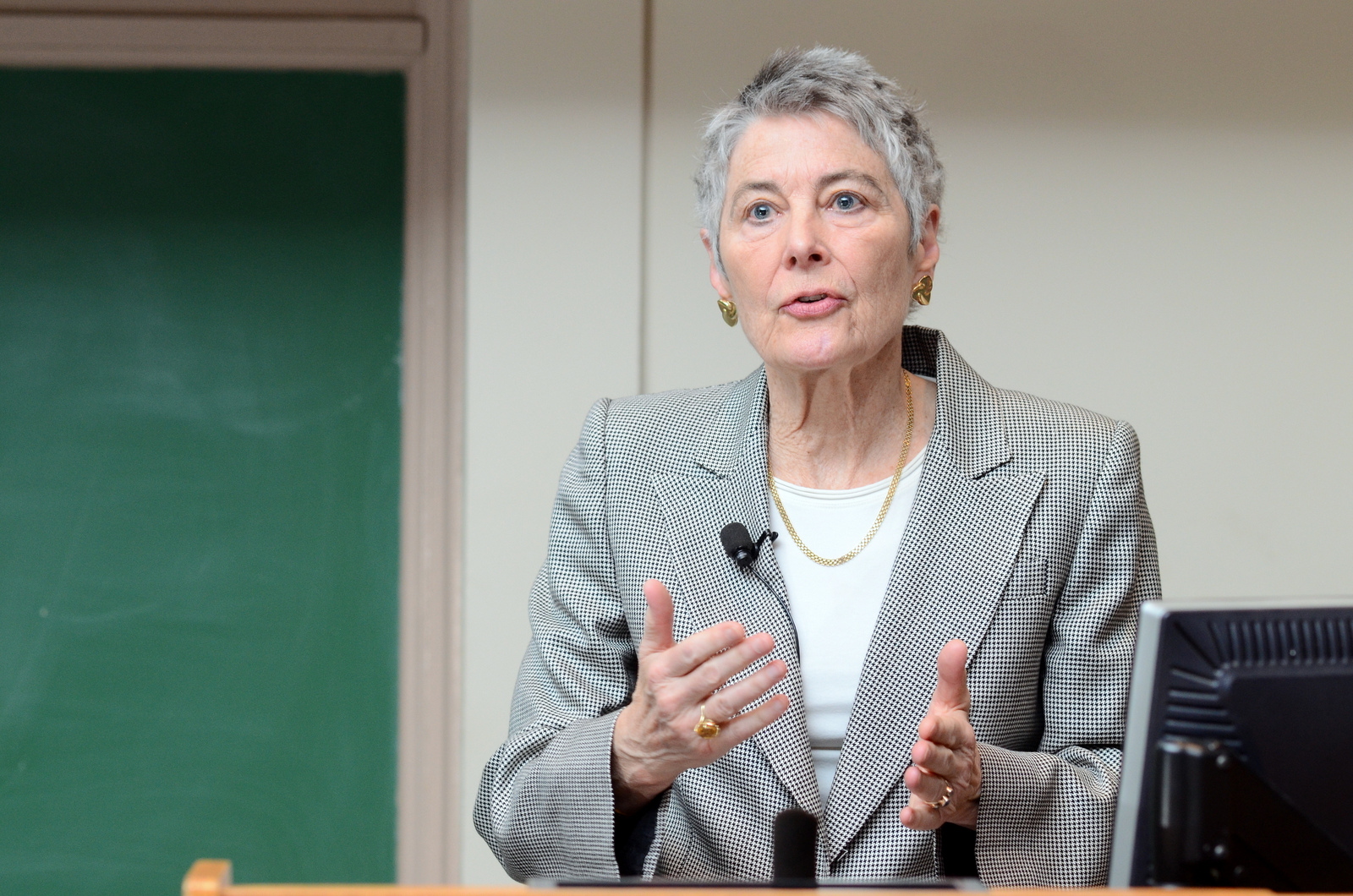 Since the end of World War II, Leaning said, the nations of the world have established institutions, laws, and norms concerning war, weapons, and refugees. Yet throughout the Syrian conflict, she said, violations of those laws and norms should have triggered intervention from outside. Those violations include not just the use of chemical weapons, but the bombardment of civilian populations and the targeting of healthcare workers and clinics and hospitals. President Barack Obama’s refusal to enforce his own “red line” for intervention—the use of chemical weapons—signaled to the world, Leaning said, that the United States were not willing to intervene in another conflict in the Middle East. 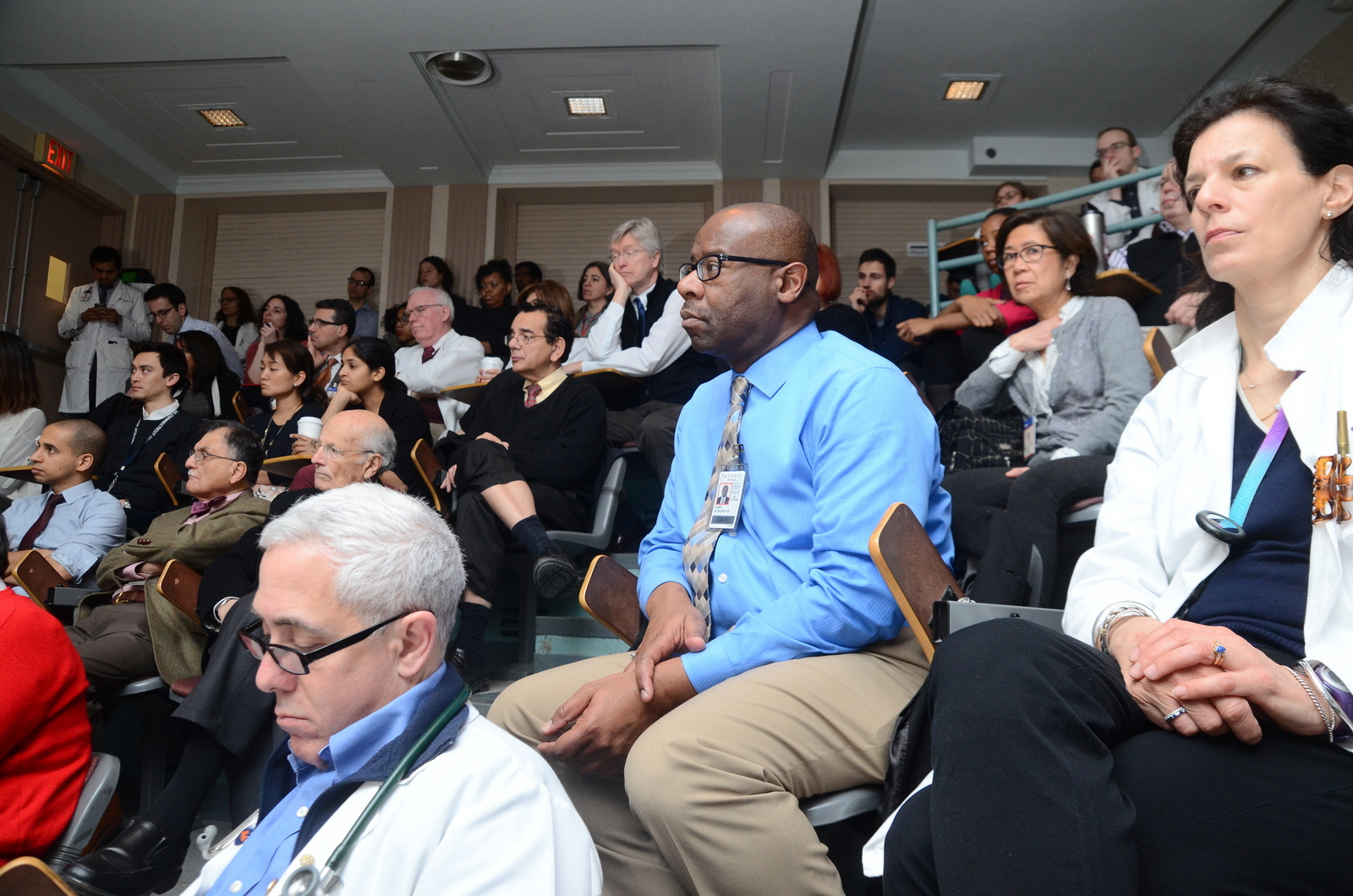 In Leaning’s telling, the crisis in Syria brings together just about all the world’s most destabilizing forces—climate change, sectarian violence, ethnic cleansing, non-state players like the Islamic State and al Qaeda, growing numbers of refugees and internally displaced people, and interference from nations with their own, often competing, interests. The war in Syria, she said, coupled with “distress migration”—people leaving Africa and Asia due to unsustainable living conditions from war, famine, or economic hardship—have created the worst refugee crisis since the end of World War II.

According to the United Nations High Commission on Refugees, 65.3 million people around the world are considered forcibly displaced. Among them are 21.3 million refugees and 10 million stateless people. More than half the refugees come from three countries—Afghanistan, Somalia, and Syria. Of those millions, only 107,100 had been resettled as of 2015.

“We are seeing people on the move throughout much of the world. We are seeing a growing number of interrelated armed conflicts. Famine is on the front page right now,” Leaning said. “This is the first time since World War II that the major states have collectively, except for Germany, refused to take refugees in any number. Yet they’re all obligated, not to take them as citizens, but to allow them to come in and lick their wounds and stand up and say, ‘Now what do I do?’”

And, she added, the convergence of crises in the region is overwhelming the world’s ability to handle them.

“It is definitely the worst refugee and internally displaced persons crisis since the end of World War II,” she said. “We are dealing with the risk of the collapse of the international order.”

Medical training in a time of war

Later that day, Hani Mowafi, M.D., M.P.H., assistant professor of emergency medicine at Yale, and Arash Alaei, M.D., clinical associate professor of health policy, management and behavior at the State University of New York (SUNY) at Albany, described efforts to keep medical training alive in Syria. Over three days in May 2016, representatives of international organizations providing relief in Syria met at Yale with the Syrian American Medical Society and faculty from the Global Institute for Health and Human Rights (GIIHHR) at SUNY-Albany and Yale to find ways to support training at Free Aleppo University. 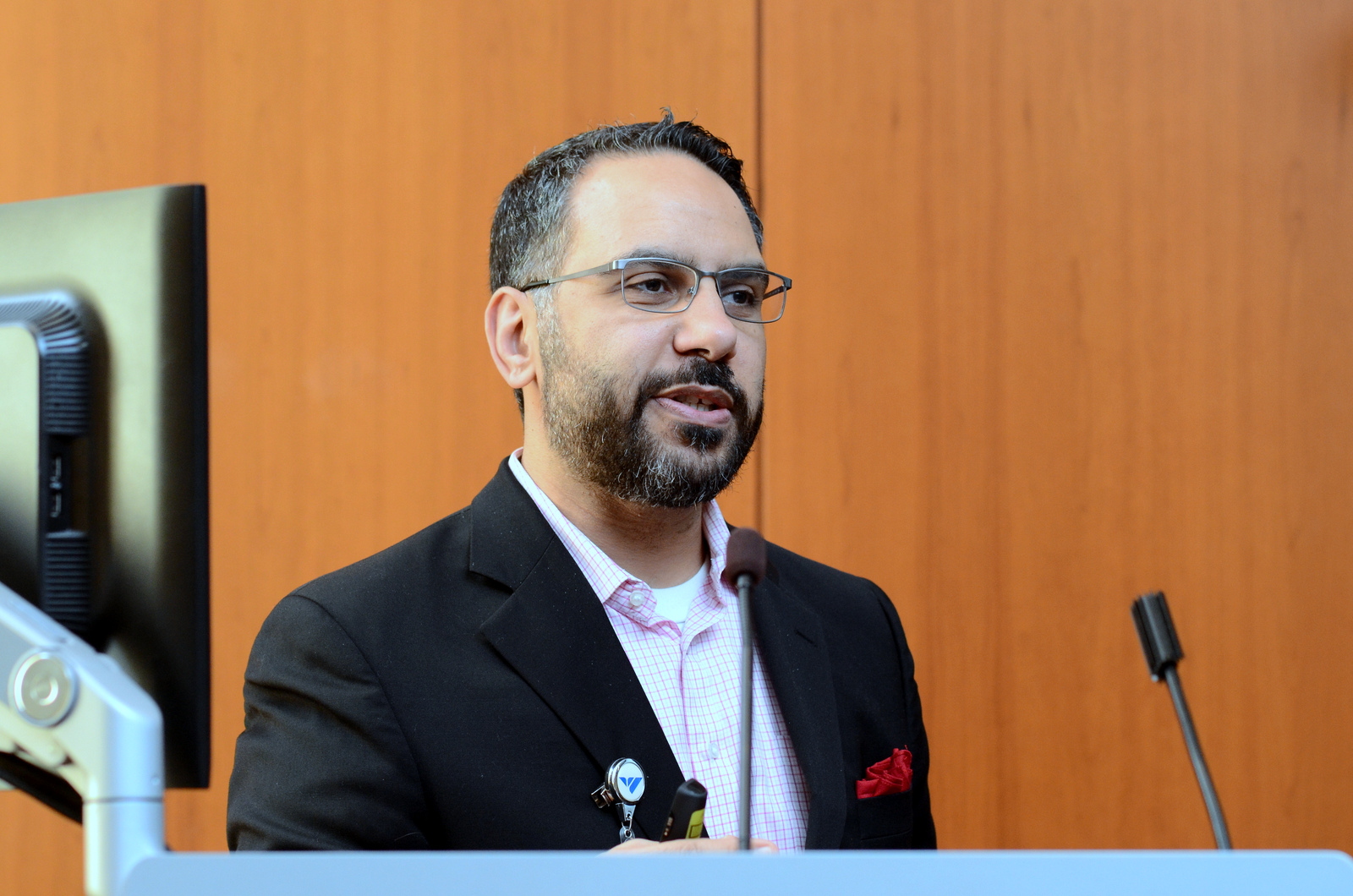 Syria poses unique problems. Health workers have been targeted as part of a strategy to deny social services to the population. The war has displaced half of the 31,000 physicians there when the war started. Another 500 to 1,000 physicians have been killed. Communications systems have broken down.

One solution to the communications problem, Mowafi said, was a device that looks like a walkie-talkie from old WWII movies, but is instead an “entire communications hub.” This two-way device with satellite phone and internet connections is the basis of ad hoc networks among hospitals and towns that allow physicians to determine what services are available where, what facilities can accept patients, and where travel is risky. “Referral of a patient on the road under constant shelling, drones in the air, barrel bombs being dropped, and ambulances being targeted with rockets is not an insignificant decision,” Mowafi said.

Health centers have used every internet platform imaginable, he said, to maintain communications for care and for education. Surgeons record procedures on their smartphones and post the videos on the internet so that they can be used in training. “Somebody who is not trained, but is forced to conduct procedures because of battlefield promotion, can see this,” said Mowafi.

At the conference at Yale last year, in which the internet connected participants with students and faculty in Aleppo, a consensus emerged to leverage technology for medical education. A priority was raising the level of English proficiency to increase access to online resources. Basic science courses were also added. An initiative by Yale medical students led to the donation of 500 licenses for an online app for anatomy training that Syrian students could access with smartphones or tablets.

Arash Alaei and his brother Kamiar, also a physician, have provided basic science instruction online and launched a course in genetics, based on lectures and PowerPoints that were translated into Arabic. They also offered weekly live online sessions led by bilingual adjunct faculty. Because few students were proficient in English, they also started intensive language courses. 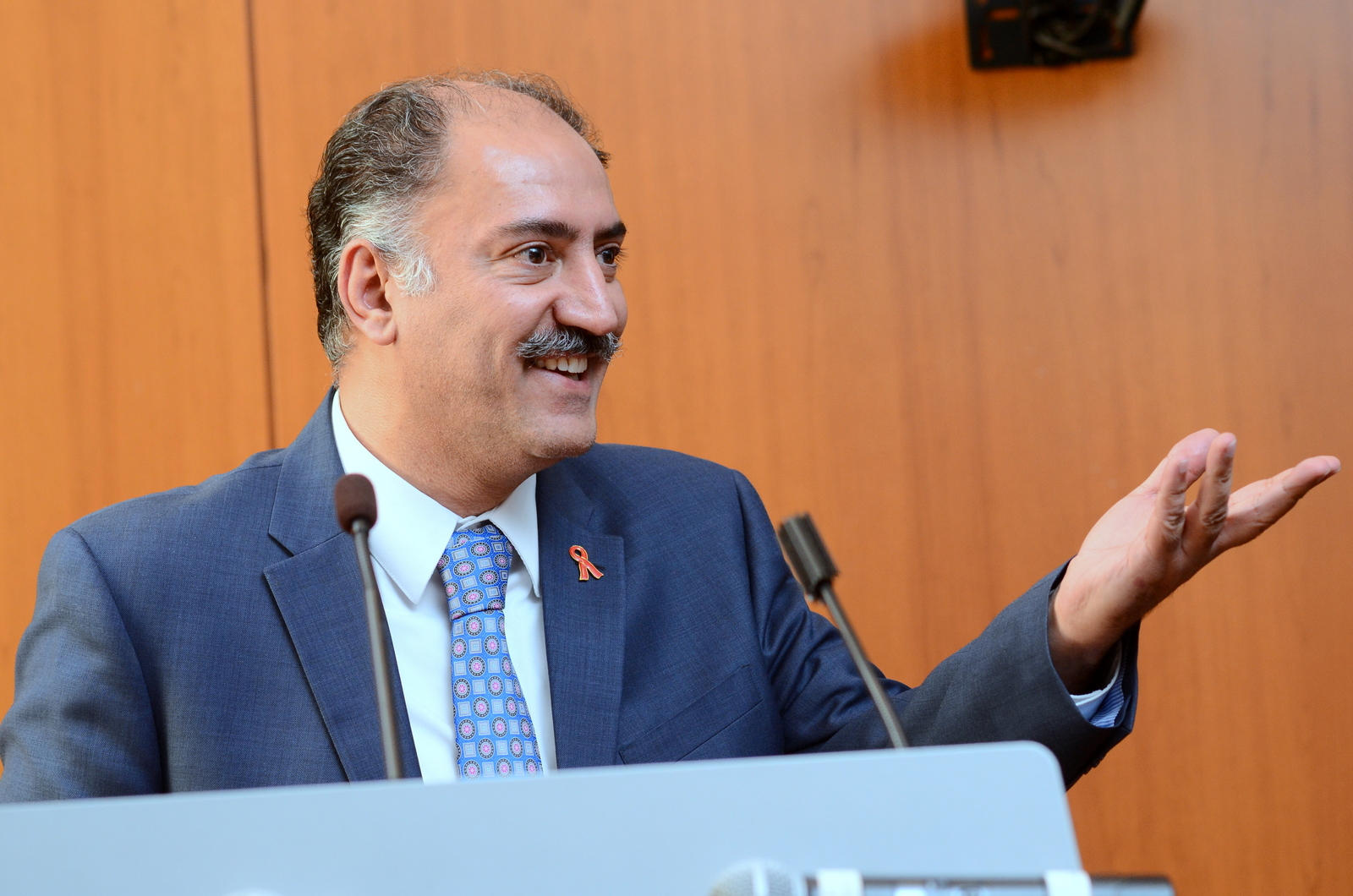 The Alaei brothers have since expanded their program, called Collaboration for Health Education in Conflict (CHEC), and are offering it to other groups displaced by war. Many contributions came from medical schools across the United States, where 59 faculty members have contributed lectures and syllabi to CHEC.

A life of advocacy

The day’s final session was a conversation moderated by Tracy Rabin, M.D., S.M., HS ’10, assistant professor of medicine and assistant director of the Office of Global Health, on balancing advocacy and medical careers. Leaning and Kamiar Alaei, M.D., associate dean for global and interdisciplinary research at SUNY Albany, discussed their own introductions to advocacy and activism.

“Part of it is how you were raised,” Leaning said, adding that she grew up in a family dedicated to public service. Her advice to students? “The activism you are drawn to is crucial in terms of your own development of values and virtues.” 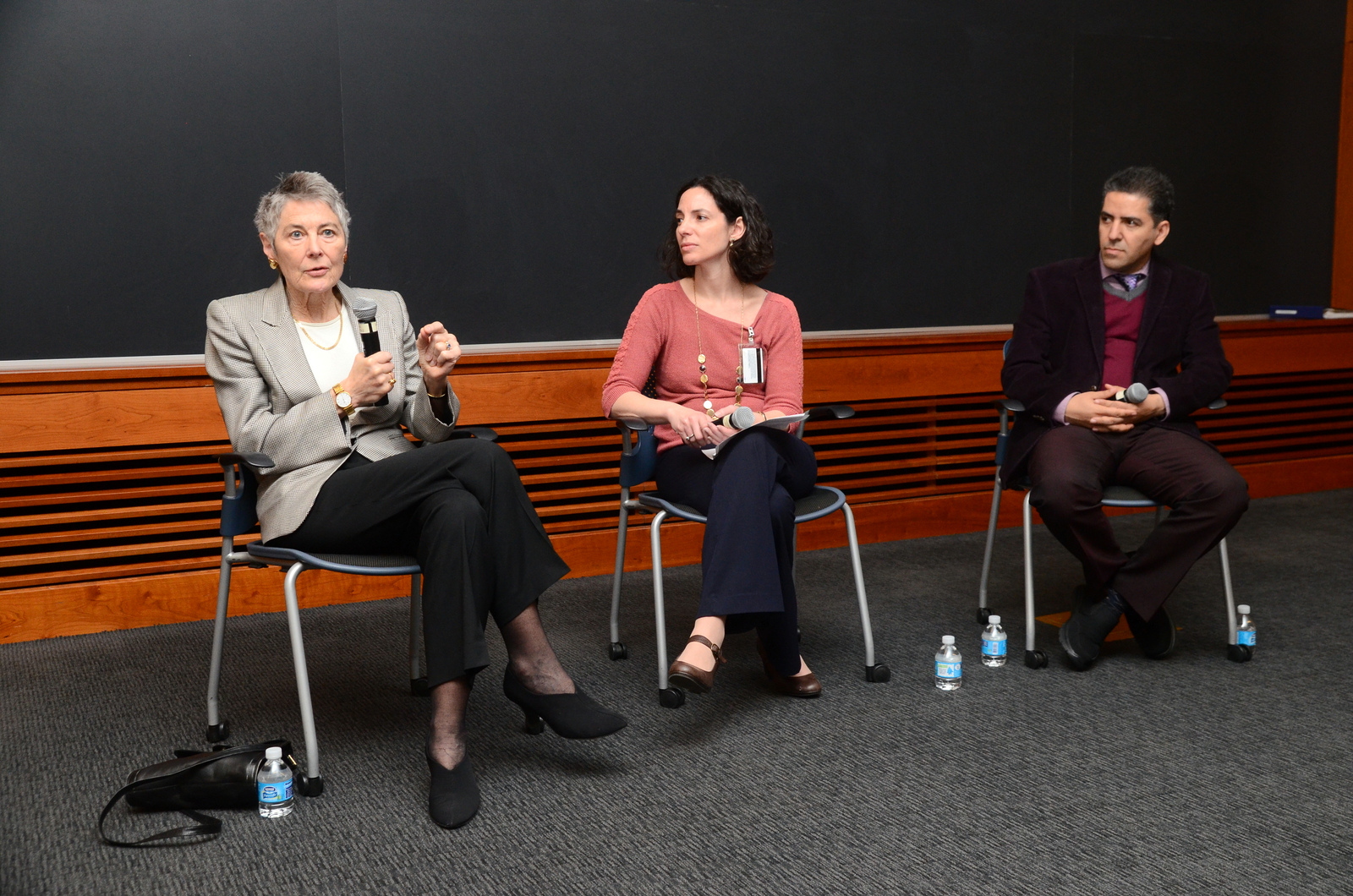 Alaei described his upbringing in Iran, where his father, a professor of Persian literature, had students over every day for literary discussions. “Our home was kind of a school,” Alaei said.

His epiphany came as a medical intern, when nurses advised him to stay away from a hospital room occupied by a patient with HIV/AIDS.

“It was shocking,” he said. “I had studied HIV in immunology, but I didn’t face the reality. I started to think about how much these people were isolated.”

Years later, he and his brother Arash launched clinics dedicated to patients with HIV/AIDS, activism that landed them both in prison in Iran. The lesson they learned from the clinics was the importance of communications and engagement with the broader community. And he urged medical students to think about what they hope to accomplish as physicians.

“If you want to do something different, you have to trust yourself and be honest with yourself,” he said, adding that students must ask themselves a final question. “Why do you want to be a doctor?”