Volunteering for a Medical Mission to Tanzania, and Returning Home Transformed

Now that some time has passed since I traveled to Dar es Salaam in October 2019, I can see that my two weeks spent in Tanzania were nothing short of life-altering.

My approach to any new experience is to not have any preconceived notions of how it will play out. Similarly, I like to take time before reflecting on them to allow any emotional conflicts that may influence my judgment plenty of time to sort themselves out. Obviously, there are many dimensions of any new experience that merit discussion. In this case, I will focus on two -- structures and people.

The Tanzania Interventional Radiology (IR) Initiative is clearly still in its infancy. As such, one can naturally expect many areas that warrant attention and improvement. Clearly, we are dealing with a resource-limited environment with a very obvious mismatch between needs and capabilities. However, where the health care environment may be lacking in funds, it is certainly not lacking in initiative and goodwill.

For instance, in about one year, through the tireless efforts of the Tanzanian radiology residents, the support of administrators and staff, and the dedication of Frank Minja, MD, and Fabian Laage Gaupp, MD, of the Department of Radiology & Biomedical Imaging at Yale School of Medicine, as well visiting clinical teams, we have been able to not only set up the basic infrastructure to perform IR procedures in Tanzania, but most importantly, to approve only the second accredited IR training program in all of Africa!

One year ago, we performed our first procedure on an improvised table using a ladder. Now we have our own room with a dedicated fluoroscopy unit. It was, however, a repurposed X-ray room that still had a defunct machine that had been pushed into a corner with its navigation track left on the floor, partially blocking access to one side of the procedure table. We brought up the need to remove the defunct unit with the department chair, and quite literally one day later everything had been dismantled, clearing the room of unnecessary obstacles. We also encountered some difficulties with overhead lighting. Within a few hours, a team of electricians rewired the room and installed a powerful new light over the procedure table.

I bring up these examples not to point out the challenges of working in a resource-limited environment, but to commend the seriousness and agility with which our hosts took our suggestions and made things happen. Similarly, at our suggestion that we freshen up the paint on the walls of the suite, our hosts helped us to repaint the entire IR procedural area. After I suggested that we paint soothing scenes, one of the nurses reached out to a local artist who, in a single night, painted amazing silhouettes of the Serengeti. I could continue for hours like this discussing all the improvements done on the nursing and tech side of our operations, but my colleagues are better equipped to discuss those areas. 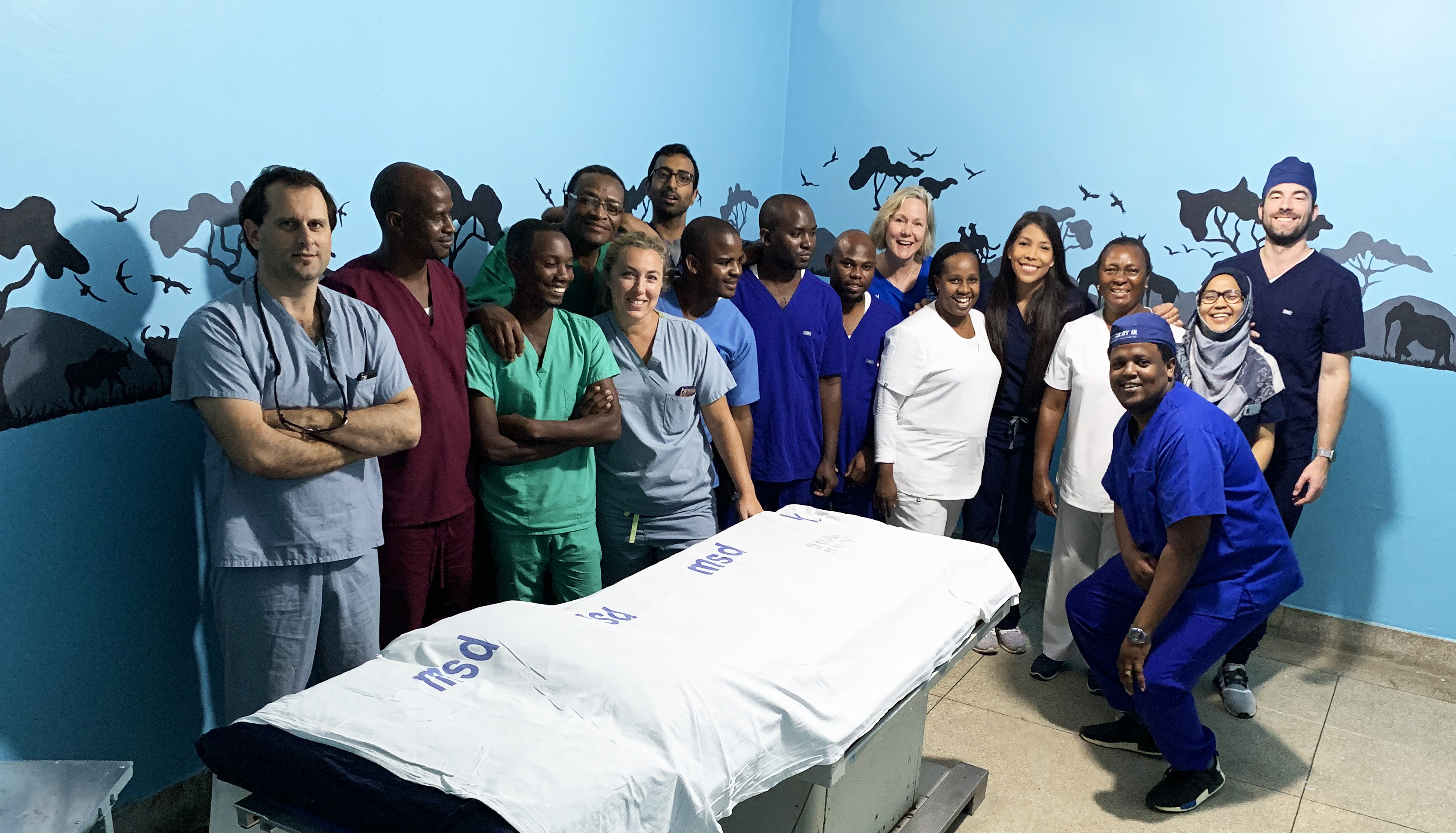 As for the people, our two classes of Muhimbili residents are as good as their U.S. counterparts, and in some cases easier to train. Their clinical skills, which have markedly improved since the inception of the program a short year ago, are superb. They ran a daily clinic for outpatient consults, and their patient assessment skills and communication with attending staff was top-notch. I felt entirely comfortable letting our Tanzanian colleagues take the initiative and perform basic and even some intermediate-level IR procedures with minimal intrusion on my part. However, in matters of follow up, our Tanzanian trainees clearly shine. They approach every patient as their private project and in many cases follow up daily with phone calls, for outpatients, and rounding on the floor, for inpatients.

Finally, I would be remiss if I didn’t mention the tireless work of our New Haven-based crew who sacrificed time, personal comfort, and in many cases money in order to make this project flourish. Laage Gaupp invested years of his life helping to set up the IR program, and his wife Diana Martinez, who also travels with the team, helped set up the inventory. IR nurse Jeanne Burke of Yale New Haven Hospital printed out nursing manuals and worked tirelessly with her Tanzanian colleagues and anesthesiologists, while IR tech Julie Albrecht, also of Yale New Haven Hospital, was instrumental in training the X-ray technologists.

Diana and Julie also helped to make the lives of the children in the hospital’s oncology unit more bearable. They collected money for daily trips to a local bookstore where they purchased probably the entire supply of crayons and coloring books (numbering in the hundreds). I was tremendously touched by these acts of kindness.

There are many medical missions to resource-limited countries. The huge advantage of the Tanzania program is that it seeks to set up a self-sustaining training program within a few years that will be entirely independent of the generosity of visiting teams. As one of the Tanzanian X-ray technologists said, “We do not need money from the West. We just need to gain the expertise so that we can do this ourselves!”

Our Tanzania mission was a whirlwind -- professionally, intellectually and emotionally -- and I hope that I am a better person for it!

Igor Latich, MD, is an assistant professor of Radiology & Biomedical Imaging at Yale School of Medicine.