Meet Our Speakers: a talk with Dr. Juan Bonifacino 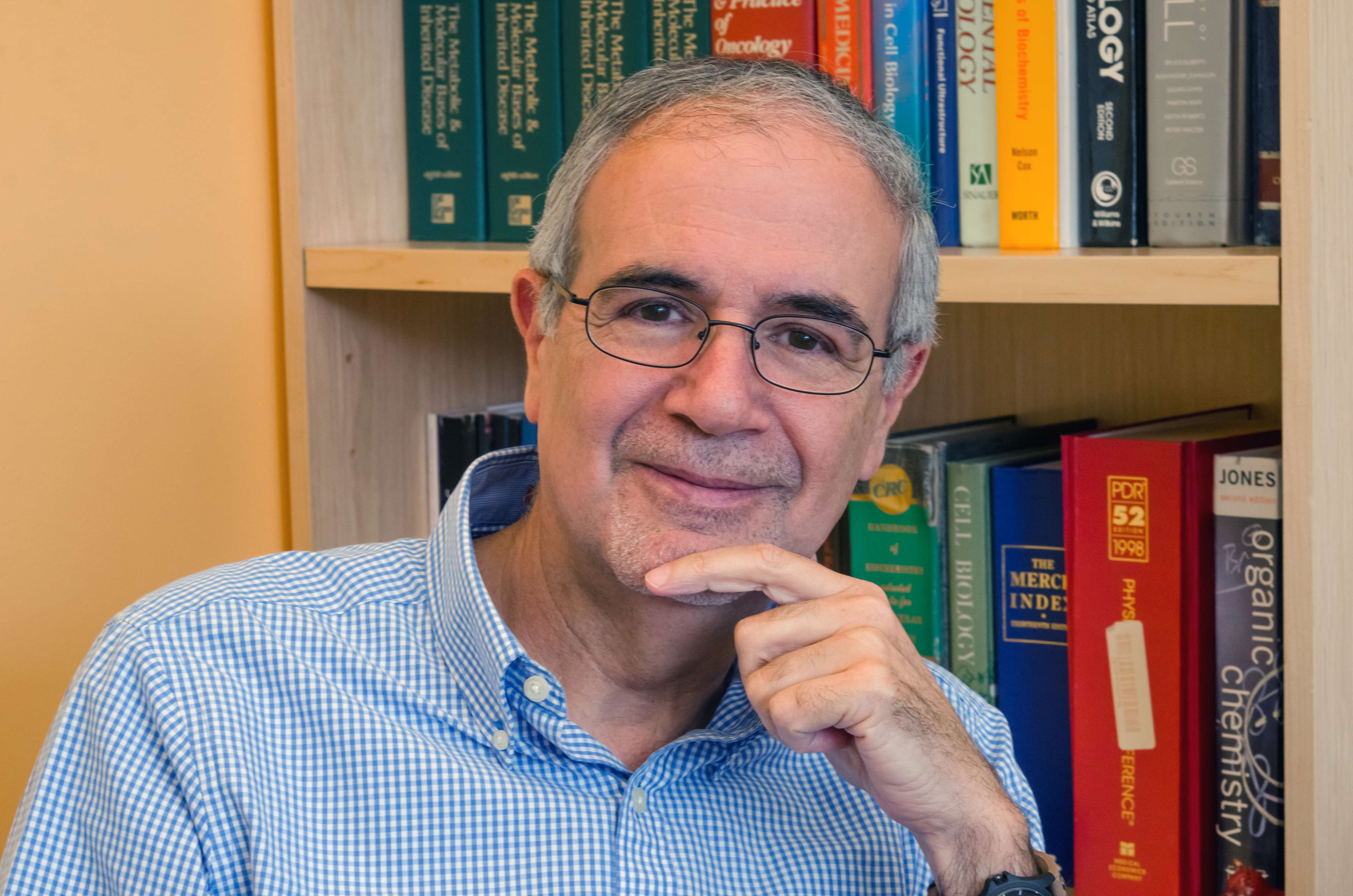 An astonishing number of 130 Department of Cell Biology members did not mind waiting for a rescheduled seminar on January 25 when the initial seminar (hosted by Prof. Dr. Julia von Blume) scheduled for January 11 experienced some technical problems. Everyone working in the field of intracellular protein trafficking has come across Juan Bonifacino’s name in high-cited journals, renowned reviews and ground-breaking papers. Not surprisingly, the virtual seminar room filled quickly with excited early career as well as experienced scientists on both of the scheduled dates. “It was a pleasure to speak at the Cell Biology Seminar Series”, Juan says. In the seminar, he presented ongoing work in his lab on “the mechanisms by which transmembrane proteins are selectively transported from their site of synthesis in the endoplasmic reticulum to their corresponding locations within cells, including organelles such as the Golgi complex, endosomes, lysosomes, and different domains of the plasma membrane in polarized cells.”

Different aspects of cell biology in many model organisms are studied in our Department, and lots of them overlap with the research topics of Juan’s lab.

“Protein trafficking involves formation of transport carriers from a donor organelle, translocation of the carriers along cytoskeletal elements, and fusion of the carriers with an acceptor organelle at different stages of the transport pathway. We study aspects of all three steps, with a particular focus on the molecular machineries that mediate them. In addition, we apply knowledge gained from the study of these machineries to the elucidation of the pathogenesis of various genetic disorders of protein and organelle transport, including hereditary spastic paraplegias and other neurodevelopmental disorders.”, Juan explains.

Juan is a celebrity within the scientific cell biological community, where his work is widely recognized. But recognition does not come on its own. Before rising to his position as NIH group leader, Juan faced many challenges, including a move from his native country, Argentina. One key to his success was his limitless curiosity that already marked his interest in science as a child.

A childhood dream of becoming a scientist

Juan was always keen to learn and gain knowledge. Both his parents were non-academics and not scientists; however, they supported him all the way to become the great scientist he is now: “They instilled in me a love for learning and knowledge”, Juan remarks. He adds: “I am a product of the public education system in Argentina and, at all levels, I had wonderful teachers“ . He relates how his wonderful teachers fostered his interest in science and ‘gave him advanced books on chemistry, physics, and biology. Along the way, he took inspiration from great scientists and was intrigued by their life and work. He enjoyed reading the biographies of scientists. “A book that inspired me in my youth was “Madame Curie: a Biography”, written by Marie Curie’s daughter, Eve Curie. I learned how Marie Curie’s passion for research led her to make astounding discoveries, often under the most trying of circumstances. I also enjoyed reading a biography of Louis Pasteur in a popular magazine. I was impressed by how Pasteur’s work seamlessly integrated basic and applied aspects of research. Another book that inspired me was “Invitation to Chemical Research” by E. Emmet Reid.” Inspired by those great physicists, biologists and chemists, Juan Bonifacino was certain about a career involving science and research, his ‘only doubt being whether to go into chemistry, physics, biology or medicine’.

A research field that combines aspects of all of them is biochemistry, and is the one he eventually settled for. During his formative years at the University of Buenos Aires, he also started his “career-long pursuit of understanding the properties of membrane proteins”. “Two review articles that strongly influenced me were: “The fluid mosaic model of the structure of cell membranes” by Jon Singer and Garth Nicolson (1972), and “Coated pits, coated vesicles, and receptor-mediated endocytosis” by Joe Goldstein, Dick Anderson, and Mike Brown (1979), Juan Bonifacino says.

Starting a career in research in Argentina, where research is less well supported than in countries like the US, might have been disadvantageous for young people in research, especially at that time. But “the awarding of the 1970 Nobel Prize in Chemistry to Luis Leloir for his discovery of sugar nucleotides and their role in the biosynthesis of carbohydrates, showed that outstanding science could be done even in peripheral countries like Argentina”, Juan Bonifacino emphasizes.

The success of scientists with similar backgrounds motivated him, but just as important were the people he met during different steps of his career.

“Over the years I had many wonderful mentors who helped me achieve my childhood dream of becoming a scientist.”, Juan appreciates the great mentorship he received. “Trainees should seek good mentors and senior scientists who will care about their trainees’ careers, be their advocates, make themselves available for scientific and career advice, and celebrate the mentees’ successes as much as their own.”

Juan himself became a role model for young scientists, and over the years trained over ‘90 postdoctoral fellows and students of which most stayed in academic research’ One of his biggest pieces of advice is “to pursue their dreams”.

“If they are passionate about a career in science, they will be able to meet all the challenges that come their way. There will be times when things don’t go well, they will be assaulted by doubt, obtaining a particular position or funding may be difficult, and experiments may not work. But, with faith in themselves and perseverance, they will find ways to overcome any obstacles.” Juan Bonifacino emphasizes.

One of those rewards are ‘Eureka moments that happen from time to time’. A lot of experienced scientists will agree with Juan: “The most enjoyable part of being a scientist is the thrill of discovery, the revelation of something that was previously unknown.”

One such moment stands out as “the most exciting discovery” in his lab,“in 1994 when Hiroshi Ohno, then a postdoctoral fellow, found that tyrosine-based sorting signals are recognized by the mu subunits of the clathrin-associated adaptor protein (AP) complexes AP-1 and AP-2”, he remembers.

“Hiroshi had performed a yeast two-hybrid screen using a tyrosine-based sorting signal as bait and had isolated and sequenced a handful of interacting clones. I remember that we both went to a computer terminal to search for those sequences in the GenBank database. This was before the completion of the Human Genome Project, so sequence information was limited. We were thrilled to find that one of the clones encoded AP50, as the mu2 subunit of AP-2 was known at the time. This finding proved that tyrosine-based sorting signals were indeed recognized by clathrin-associated proteins, something that had been hypothesized but not yet demonstrated.” This discovery “was the beginning of the lab’s focus on signal-AP complex interactions”.

The joy of like-minded scientists discussing new theories to explain often unexpected results, and the excitement when experiments align with hypotheses, these are moments that all of us share with our lab mates pursuing a career in academia.

“There were many other exciting moments in my career”, Juan adds, “but this one is particularly memorable because it happened at the beginning of my tenure-track position at the NIH and some people had expressed scepticism about our chances of success.”

Juan enjoys ‘meeting with people in the lab and learning of their findings’: “My favourite activity of the work week is our group meeting in which we discuss those findings.”, he shares.

On a bigger scope, sharing thoughts and science with international colleagues in the labs is enjoyable too: “I cherish the international nature of the scientific enterprise. I love being able to work with people from different countries, backgrounds and cultures, all in pursuit of shared scientific goals.”

Although international cooperation in science is strong and blooming, the diversity in a smaller scope within a research lab or institution might be a different story. With a view on the represented groups of scientists in the labs at Yale, there is the need to increase diversity even more. Juan agrees and ‘feels particularly strongly about the need to further diversify our workforce by increasing the proportion of women and underrepresented minorities in scientific institutions.’

“This means not only increasing recruitment at entry-level positions, but also actively mentoring and supporting them, eliminating biases, and helping them achieve the highest levels of recognition and positions of leadership”, Juan emphasizes.

“It’s as much a matter of social justice as a practical policy to expand the pool of talented people engaged in scientific research.”

Apart from science, Juan enjoys learning about people in the world. He ‘loves travelling, knowing other countries, their people, and cultures’. “Because of the COVID-19 pandemic, for the past two years I have not been able to do this”, he says. But instead, he took a deeper dive into the world of music. “I have been listening to a lot of music.”, Juan explains. “I have eclectic tastes, but my favourite kind is classical music. I have particularly enjoyed discovering the works of lesser-known composers, such as Francis Poulenc, Louise Farrenc, Reynaldo Hahn, Peter Warlock, and others.”

Apart from music, reading has always been important for Juan Bonifacino. Scientifically, he has served in various editorial capacities for the journals Developmental Cell, Molecular Cell, Molecular Biology of the Cell, Journal of Cell Biology, Journal of Biological Chemistry, Traffic and Current Protocols in Cell Biology. Today and during the pandemic lockdown, he also spends more time reading ‘both non-fiction and fiction’.

“The last non-fiction book I read was <The Death and Life of the Great Lakes> by Dan Egan”, Juan tells back in March. A recommendation for fiction are Michael Connelly’s crime novels. As a “big fan”, he’s read every single one of them. Juan is also a fan of ‘hiking and jogging, two activities that I could still do during the pandemic’ and that are definitely helpful for keeping a healthy lifestyle and balance.

We talked about the past, the present and going to the future in 10 years, where Juan Bonifacino “will be content doing just what I am doing right now.”

The curiosity and passion that set his path into the career as a scientist, mentor and world citizen will also go strong in the future: “There are so many more exciting things to discover, countries to visit, sights to see, music to hear, people to meet, worthy causes to support.”

In a closing remark, Juan also’ hope[s] that the whole world will ultimately come to its senses and work together to solve the most pressing problems of humankind, as science shows it can be done’. He often thinks ‘that science demonstrates that international cooperation and harmony are possible if everybody gives the best of themselves.’ If the same spirit was devoted to the prevention of war and disease, to address the challenges of climate change and the extinction of species, to eliminate world poverty, we would all live in a much happier world, Juan proposes.

With these words, let’s appreciate the great ideas and connections Science has built between people across labs, countries, continents, borders to answer important questions not only for each individual scientist but for the bigger scientific community.